The 2017 Aussie Millions Poker Championship at Crown Melbourne is almost here. The tournament is set to kick off next Wednesday, January 11 and run through Monday January 30, 2017.

The signature Main Event Championship will begin on Sunday January 22 with three Day 1 flights. Play will continue until a champion is crowned on Sunday January 29. The series will conclude with the final table of the high-roller $250,000 Challenge on Monday January 30.

The eventual winner of the 2017 Crown’s Aussie Millions Main Event will join 2016 winner Ari Engel of Toronto, Canada (pictured), in an illustrious group in history, walking away with an estimated AUD$1.5 million dollar first prize as well as the Main Event Champion bracelet worth over $25,000.

Crown Melbourne’s Tournament Director Joel Williams said "Crown’s Aussie Millions Poker Championship continues to absolutely stamp itself on the global ‘must-attend’ list for both recreational players and seasoned pros alike. With a schedule now featuring 26 official Championship events, 2017 looms as one of the biggest years yet".

While the entry fees may sit outside the budget of some players, everyone can qualify via the countless satellite tournaments in the lead-up and during the event itself, offering players the chance to win a place in the Aussie Millions Main Event for a fraction of the AUD$10,600 entry fee.

See the current schedule at: http://www.crownpoker.com.au/tournament-schedule

The annual poker tradition, which dates back to 1998, has become a must-visit tournament for global poker players including revered players like 2007 Aussie Millions Champion, Gus Hansen. “It’s the place I keep coming back to for the poker, the Australian Open tennis, the atmosphere, the staff and the Australian people,” said Hansen.

Jason Somerville said, “I’m honored and thrilled to be partnering with Crown Melbourne to showcase the 2017 Aussie Millions once again on Twitch. The Aussie Millions is one of the most premiere and prestigious poker tournaments on the planet and I’m excited to present the action once again to fans around the globe. Last year’s broadcast was the most-watched live poker Twitch event of the year and I’m certain this year’s shows will be even better.” 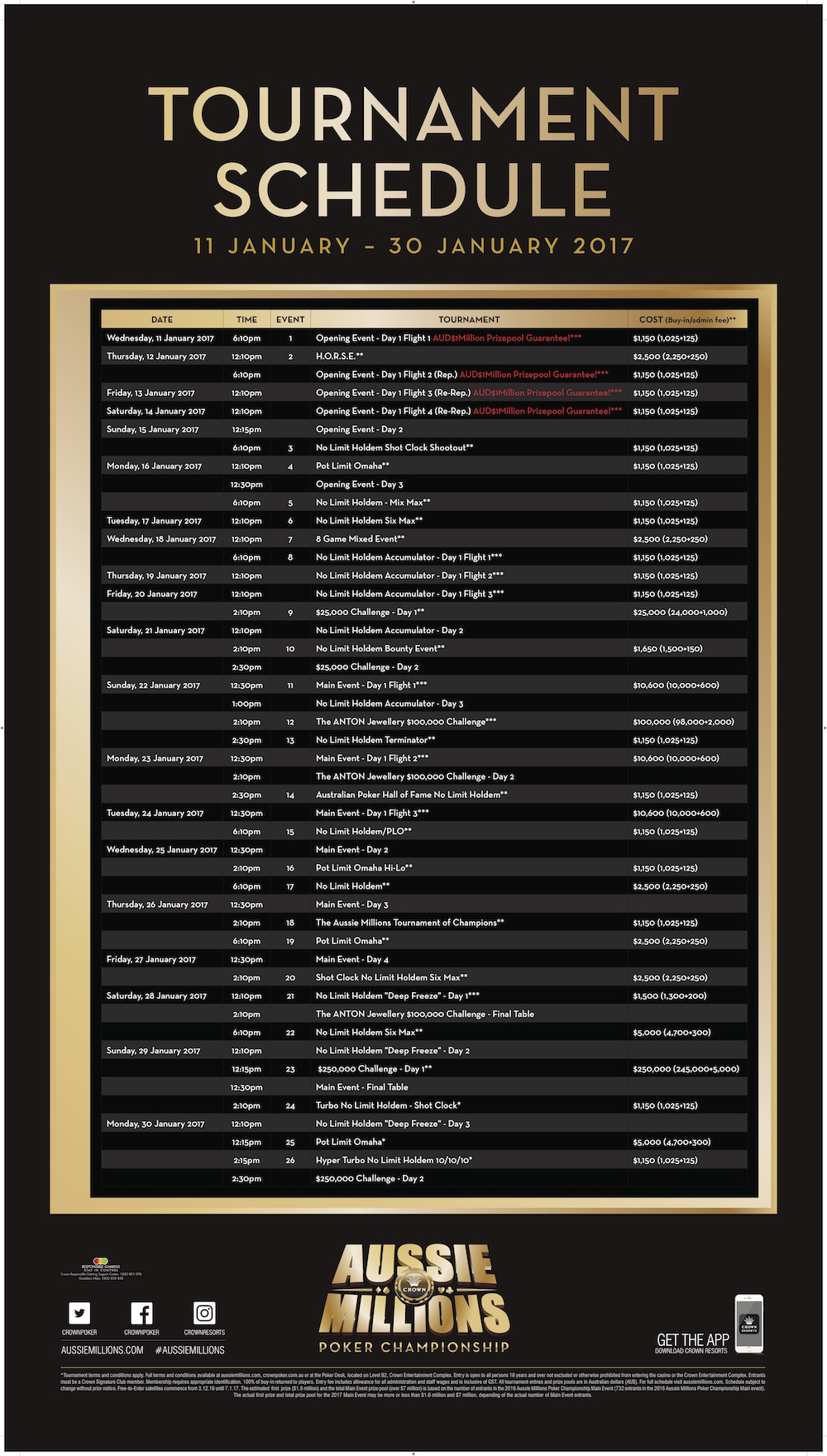 Canadian Ami Barer has been crowned the latest Aussie Millions champion after winning the Main Event of the 2014 Aussie Millions Poker Championship series. 668 players entered Australia’s most famous event this year and fought […]

The final table has been decided for the 2013 Aussie Millions Main Event with a pair of Aussies still in contention to make it five in-a-row for the host nation. Melbourne-based duo Jarrod Glennon and […]