Welcome to the live reporting of the 2016 Sydney Championships from The Star.

PMA are proud to be providing a live blog of the final table of the Opening Event NLH $330 which can be found below and at the Star Poker blog page as part of the blog today. 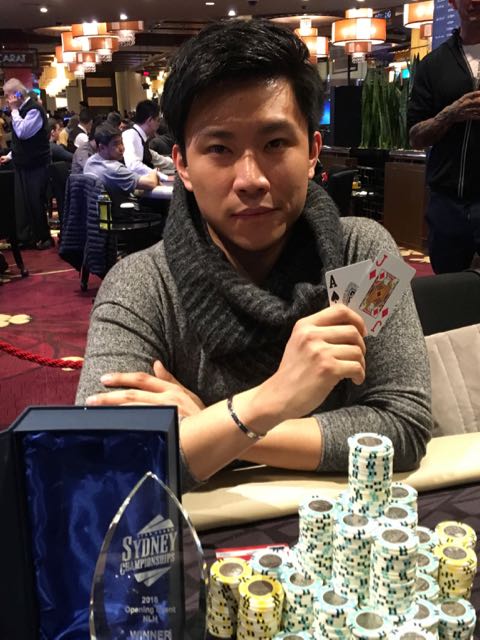 The winner of the Opening Event is Haoran Zhang (pictured), having eventually overcome David Goldberg in the heads-up battle. Zhang came into the final nine with a significant chip lead and has been able to make it count, using his big stack to his advantage. As has occurred in previous Series, the winner of the Opening Event often pops up in future events…will Zhang have more left in the tank to perhaps run deep in the Main Event. Stay tuned…

The unique thing about the Opening Event final table each series is that because the $330 buy-in attracts a much larger percentage of amateur players, the prize money on offer to the last nine can represent a huge windfall. As a result, they tend to be railed by large group of family and friends with every big pot won celebrated with incredible vigor.

Rest assured, the whole room soon knows when a player is eliminated or takes a huge step towards victory.

It makes for great theatre and is one of the reasons the Opening Event has become such a popular part of The Star’s tournament series.

Who will take it down?

As we head back over to the final table of the Opening Event, we note that Paul Murray has been the most recent player eliminated. He’s battled the 1187 players to finish a gallant third to take home almost $30,000 for his $330 buy-in. Not a bad payday for such an investment, well done!

With the recent busts, the payouts are as follows:

In rather quick succession, another three players have hit the rail. First to end his run towards the crown was Dennis Nayda who finished in 6th position. Chris Downey and Steven Swan have been the next two players then railed to leave three to remain in the Opening Event.

It’s worth noting that the Opening Event has attracted a record field 1187 entrants this year. Almost a sell-out, Star Poker may have to add another Day 1 flight to accommodate the demand. The $250,000 guarantee was also a good initiative that shows tournament poker here at The Star is very healthy.

Initial play at the Opening Event final table has started conservatively, having seen only the three intial bust outs.

With the recent busts, the payouts are as follows:

The Opening Event is providing an entertaining sidshow here in The Star Poker Room tonight, with three players having so far hit the rail.

Jame Kirkland was the first to exit with Kyle McLean and Leon Sadr following soon after. That leaves six still in contention for the top prize of $67,125 with Dennis Nayda, Haoran Zhang and David Goldberg all sitting behind stacks of around 2.5 million.

The Opening Event final table has kicked off in The Star Poker Room as the PMA 6-handed event bubbles slowly alongside.

After four day 1 flights and a long day 2 of play yesterday in the Opening Event, nine players remain. Haoran Zhang has a commanding lead but there are several others with enough chips that could easily be in the running. We’re looking forward to an entertaining final table. Players have gathered in the Star Poker room ready for the start of play where the winner will take home over $67,000.

The starting chip stacks of the final nine are as follows:

Ronald Bean leads Day 1a field That’s all she wrote for Day 1a of the 2015 Star Summer Series Main Event! It’s been a busy day here in The Star poker room with 159 players […]