And we’ve called it a night! It’s been a late one here in The Star Poker Room with nine levels of play taking us well into the morning, but it has also seen us cut a swathe through the flight one field with 38 surviving of the 112 that took their seats last night.

Leading the way is Alex Falon who began strongly and maintained that momentum throughout, while others to progress include Jarred Graham, Didier Guerin, Peter Aristidou, Andrew Hinrichsen, Rory Young, James Rann, Sam Khouiss and Tony Kambouroglou.

They will all return for Day 2 on Sunday, where they will be joined by the survivors of flights b and c over the next two days.

In the meantime, we’ll be back here at The Star from 12.30pm tomorrow to bring you all the live action from the second flight of the inaugural Australasian Poker Championships Main Event.

The tournament staff have informed the players there will be three more hands played tonight!

Peter Aristidou has scored a late double at the expense of Andrew Hinrichsen after flopping a set of 7s. Aristidou moves to 65,000 with that hand while Hinrichsen drops down to 60,000.

We’re back for our final level of the day!

We couldn’t help but overhear the conversation between players at Table 74 after one of them commented that he was trying his hardest to stay awake.

The others chimed in with an interesting scenario – if one player refused to do anything when it was his turn to act and his tablemates all refused to call time, could they just sleep for an hour with no one being blinded down?

A supervisor quickly reminded them that he too had the power to call time, but it certainly shows that even poker players can struggle when play continues well into the early hours!

Robert Lam has moved to 85,000 after finishing on the good end of a three-way pre-flop all-in. It was Lam with QQ against the JJ and 99 of his opponents, with Angelina Rich holding the 9s.

Neither a J nor a 9 were anywhere to be seen however as the board ran out T7463 to send two to the rail.

2015 Aussie Millions champion Manny Stavropoulos has been sent to the rail by Jonathan Karamalikis after running 55 into JK’s QQ.

The board ran out AA9TQ as Karamalikis stacked up to 58,000.

Whether it be fatigue or just that stage of the tournament, there has been a bit of a lull in play over the past 30 minutes or so with less action and much less noise spilling out across the room.

That’s likely to change in the next level, however, when the short stacks have to decide whether to nurse their chips through to Day 2 or take some risks give they can buy-in again for flights two and three.

1.40am: Blatt blasts Hall away

We noticed Laurence Hall disappearing into the distance and discovered Dean Blatt stacking chips at his table. As it turned out, Hall had looked down at AK only to run into the AA of Blatt – the latter sending Hall to the rail while building his own stack to 93,000.

With two-and-a-half levels remaining in the night’s play, we’ve lost almost half our field with 60 of the 112 who started having already hit the rail.

Ryan Hong has started to make a move, the recent elimination of a player helping his cause as he moves up to 71,000.

Hong opened in mid-position to 1,600 before the button shoved for a touch under 20,000. Hong called with KK and found himself in a dominant position against KQ.

The board ran out QJ8J9 and Hong is starting to look dangerous.

1.15am: Pappas likes the Ladies

We heard a commotion at Steve Pappas’ table and raced over to find a mountain of chips in the middle and the dealer counting out Pappas’ stack.

As it was subsequently told to us – and we can’t guarantee the accuracy of this story – Pappas raised pre-flop with QQ and was 3-bet by Ajay Tooloa. Pappas then paused and called “Brendan” for advice, who told him, “Go all-in, it’s okay – a Queen is coming on the flop”.

With that Pappas shoved and was snap-called by Tooloa who held AA. Right on cue, the board came Q6585 as Pappas took down a monster.

One thing we know for sure is that Pappas now has 80,000 in chips while Tooloa still boasts a healthy 75,000 in chips.

Players are on a 10-minute break 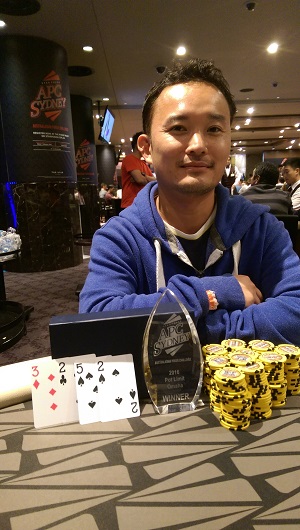 Aside from the Main Event and the final table of the $5k Challenge, there has also been a $550 Pot Limit Omaha event here in the Star Poker Room today and it has just been won by Tam Truong.

Renowned for his relentless aggression, Truong dominated the final table, entering three-way play with more than double his opponents’ combined stacks and finishing the job with ruthless efficiency.

We caught the action on an 87TQ9 board with 5,500 in the middle and former AFL star Adam Goodes contemplating his next move.

He eventually threw out a bet of 3,000, sending Didier Guerin deep into the tank. Shaking his head, Guerin reluctantly mucked what he said was a very, very good hand. Not to worry, he is still travelling well with 60,000 while Goodes is hovering around the starting stack of 30,000.

Rined Namrood made a deep run in the $5k Challenge and he is off to a flying start in the Main Event too, having stormed his way to a monster stack of 165,000.

Namrood made a big fold early on with TT when faced with a huge all-in bet pre-flop by the table maniac, but his discipline is paying big dividends now.

A number of players from the $5k Challenge final table have now taken their seat in the Main Event, including Jarred Graham who made a three-way deal with Daniel Neilson and Corey Kempson for around $100,000 each.

The cards are back in the air

We’ve seen 101 players take their seats in tonight’s opening flight so far, with 78 remaining. It’s a solid start, particularly given that everyone who busts tonight can try their luck again in Friday and/or Saturday’s flights.

Being patient paying off for Jonathan Karamalikis waking up with Pocket jacks and flopping top set to improve his stack to just over 34,000.

WPT 4th place finisher John Caridad has just cracked his opponents pocket Kings after an all in call cry came from across the room.

The board read 782 rainbow with John showing his opponent 78 off suit  for two pair, the board couldn’t improve for pocket kings and his opponent sent to the rail.

Ben Jee is our early chip leader with his stack already nearing the magical 100,000 chip mark.

UTG raised to 415 with action folding to Jee’s opponent in mid position who re-raised to 1,100. The small and big blind completed with the flop reading 9K3 all spades.

Action checked around to he original raiser who fired out 1,800 only to be re-raised by Jee in the big blind to 5,125. His opponent made the call with all others getting out of the way.

We’ve just witnessed a crazy hand early in the main event that began with a straddle! With blinds at 100/200, Ling Yao was the man to straddle for 2,000 before an opponent re-raised to 3,000.

Namrood tanked then eventually folded what he said was a very big hand!

The tournament staff here at The Star have the over/under figure for this event at 400 players with anything over that figure considered a great success.

They’re off to a solid start with 81 registered for tonight’s flight so far.

Welcome to The Star in Sydney where the Main Event of the inaugural Australasian Poker Challenge Main Event is underway!

The tournament staff have just announced Shuffle Up and Deal as the first of three flights of players dig on for along night of poker.

The plan for the evening is to play nine one-hour levels, meaning we’ll finish sometim around 4am.

9.45pm: Tam takes flight as Day 1 comes to an end It’s been another long day here at The Star but after eight levels and almost 100 eliminations, a total of 148 players will return […]

The World Poker Tour is heading to Australia. Star Entertainment Group and the WPT announced on Wednesday a historic partnership that will see the famous poker tour head Down Under for the very first WPT […]