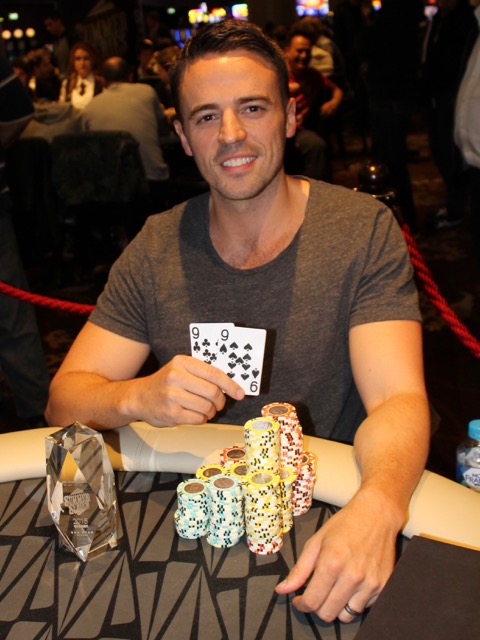 Tom Rafferty (pictured) has emerged victorious after a long two days featuring a marathon 3-handed battle at the final table.

But when it ended it ended quickly. First, Rafferty eliminated Ajay Toolooa in third to take a 2-1 chip lead into heads-up play, then took care of Jeff Rossiter just a few minutes later to claim the trophy and its $150k first prize.

Rafferty overcame a field of 108 entries to take the win, adding to his third place finish at APPT Sydney in 2010 and second place at the 2011 Star Summer Series.

Congratulations to Tom on a well-earned victory! The final table placings were a follows 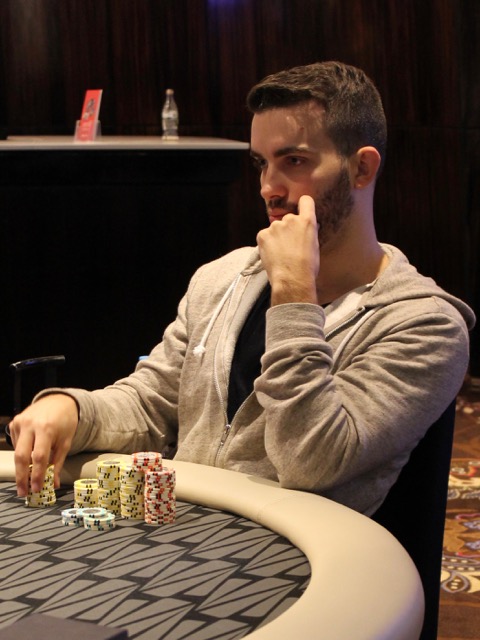 And just like that it’s over. The final hand was a pre-flop clash that saw Rossiter (pictured) shoved with 77 only to find himself well behind the 99 of Rafferty.

The flop ran out K5568 leaving Rossiter to settle for a not too shabby $100k payday!

Players are on a short break. When they return they will begin heads up play as follows 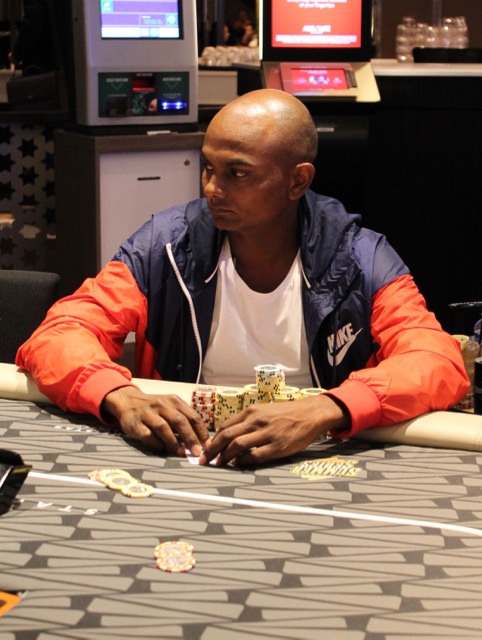 The fireworks we anticipated finally arrived as Ajay Toolooa (pictured) and Tom Rafferty clashed on a 2T3 all heart flop. Toolooa bet 32,000 and Rafferty raised to 110,000. Toolooa called.

The turn brought a fourth heart and this time Rafferty checked to Toolooa who announced h was all-in. Rafferty snap called with the A of hearts as Ajay slammed the K of hearts onto the table.

Incredibly, when the stacks were counted Toolooa was left with a solitary 1,000 chip, which didn’t last long!

Ajay Toolooa has shown a propensity to over-shove today, although the fact that the first two times he did so he showed KK certainly has his rivals concerned.

He earlier forced Tom Rafferty off what Rafferty said was AK on a K57 flop with a huge overshove and Rafferty just reluctantly folded again on the river of a four heart board.

There has been some minor adjustments to the chip stacks over the past hour, albeit nothing to significantly sway the title in any one direction.

We very nearly had our first all-in clash of this 3-way contest and the big question the crowd is asking is how we didn’t!

It began with Tom Rafferty opening the button with AK and Ajay Toolooa 3-betting to 52,000 from the small blind. Rafferty called and they took a flop of K57 with two diamonds. Then the hand got interesting with Toolooa over-shoving for 420,000!

Rafferty went deep into the tank before folding and announcing he had … AK! Toolooa flashed the K of diamonds and scooped the pot.

Despite the impressive list of achievements on the resumes of these players – particularly Jeff Rossiter – play has been incredibly cagey so far with all three reluctant to commit too many chips. Needless to say, not much has changed recently!

Players are now on a 10-minute break

Tom Rafferty has moved into the chip lead after taking a tidy pot from Ajay Tooloa.

Rafferty raised to 24,000 from the small blind and Toolooa defended. The flop came A83 with two hearts and Rafferty continued for 25,000. Toolooa called. The turn was the J of hearts and this time Rafferty check-called a 30,000 bet.

The river was a K with Rafferty leading this time for 75,000. Toolooa called but mucked when Rafferty showed 85 of hearts for the turned flush.

It couldn’t get much closer as 3-handed play begins with all three boasting around 50 big blinds. Still plenty of play to be had here.

Short stack Adrian Attenborough had started picking up a few decent hands based on a handful of all-in raises over the past 30 minutes, but the first time he was called also proved to be his demise.

Attenborough found himself racing with 99 against the AK suited of Ajay Toolooa and the flop was a disaster for him, not only containing an A but also two hearts to leave him with just a lone out.

Jarryd Godena’s elimination means we have one short stack remaining in Adrian Attenborough and three big stacks with not a whole lot between them. The stacks are:

Jarryd Godena finally found a hand good enough to commit his last 120,000, but his 66 was no match for the JJ of Jeff Rossiter.

The flop killed any suspense and sent Godena on his way as the board ran out KJ9T9. We’re down to 4.

It’s all been very sedate here at the final table since Minh Nguyen’s elimination an hour ago, with only a few hands seeing a flop and no big clashes whatsoever. What will the rise in blinds bring?

First hand back from the break, Tom Rafferty opened in late position and Minh Nguyen shoved for his last 95,000 from the blinds.

Rafferty called to find his A4 well behind the AK of Nguyen. Not for long though – a 4 on the flop made him a huge favorite to core the knockout and when no K arrived Nguyen was off to the pay desk.

Players are now on a 20-minute break

An almost identical fate has just befallen Jason Pritchard to the one that sent Grant Levy packing, with the former chip leader getting it in with AT only to run into the KK of Ajay Toolooa.

Once again, there was no A to save the day with the board running out 6Q827.

The fortunes of Jason Pritchard and Jarryd Godena have been headed in opposite directions of late.

Former big stack Pritchard is now down to 100,000, while Godena has turned his recent good fortune into a 190,000 stack.

We just witnessed a huge hand play out between Grant Levy and Ajay Toolooa that resulted in both players getting it all-in pre-flop and ultimately Levy sent to the rail.

Levy held AK but needed help against the KK of Toolooa. It didn’t come as the board ran out 6TQT7, with Toolooa soaring to the chip lead.

Jarryd Godena has just pulled a rabbit out of a hat to double and stay alive. He found himself all-n for his last 42,000 with AJ against the AK of Minh Nguyen and looked headed for the exit as the board came 6Q43, but a J on the river earned him a last minute reprive ea she moves to 90,000.

Dejan Boskovic got the last of his chips in with 99 and was racing against the AK of Jeff Rossiter. The flop came K-high and he exits in 9th.

Safely in the money, David Wang shoved next hand with Q9 and was called by Jason Pritchard with AJ.

An A landed on the flop and it was all over for Wang. We are now at our official final table of nine.

Donald Civic was down to just 5 big blinds and eventually found A4 to shove with.

Grant Levy called in the big blind with J9. The flop was a safe one for Civic but a 9 on the turn left him drawing to just a handful of outs – none of which arrived on the river.

He exits in 11th meaning we are now in the money!

The chip counts with 11 remaining are as follows:

There are still 11 remaining – and we’re still on the money bubble – as we prepare to go on our first 10-minute break of the day.

With the short stacks – David Wang, Donald Civic, Dejan Boskovic and Jarryd Godena – all desperately trying to make the money, a couple of the big stacks are taking the opportunity to steal as much as possible.

On one table that  player is Tom Rafferty while Adrian Attenborough has been opening regularly on the other.

Robert Damelian shoved from the button again with A3 and was called by Grant Levy with K6.

The board ran out 68T98 and Damelian’s day is done.

We are now down to 11 and officially on the money bubble! Play will be hand for hand until we lose another player.

5.40pm: Damelian hanging in there

Robert Damelian has been riding a desperately short stack all afternoon and currently sits with just over 20,000 – around 7 big blinds.

He finally shoved just moments ago from the small blind expecting a call but Adrian Attenborough flashed 32 before folding.

Jeff Rossiter opened from the button and Greg Cook announced he was all-in from the big blind for 39,000.

Rossiter didn’t like it but eventually made the call with 66 to be racing with Cook’s KQ.

The board ran out 99435 and Cook is our latest casualty.

Ryan Hong is our latest casualty – again the victim of Adrian Attenborough.

It was the desperately short-stacked Hong’s Q8 in all sorts of trouble against Attenborough’s QQ and he fell short of the money when the board ran out K5T28.

It’s all happening here at The Star poker room, with James Rann the third player eliminated in a matter of minutes.

Rann had no hesitation getting it in with AK but Ajay Toolooa had him crushed with AA. There was a glimmer of hope when a K appeared in the window but Rann couldn’t find another to survive and exits in 15th.

5.00pm: Attenborough kills off another

There has been a bit of action in the last few minutes with another player hitting the rail. Tolly Sakellariou shoved with 77 and was called by Adrian Attenborough with KK. The board ran out 2A5A4 and we’re down to 15!

Jeff Lisandro shipped his last 35,000 with KQ and was called by Jason Pritchard with AJ.

The board ran out A635K and we’re one player closer to the money with 16 remaining.

A reminder of the payouts today, with the top 10 places making the money:

Jonathan Karamalikis shoved for his last 47,000 in the small blind with A3 and was called by Adrian Attenborough with 88 in the big blind.

The flop wasn’t what JK wanted to see as it fell Q8T to give Attenborough a set and leave us with 18 players remaining.

And just like that, Levy arrives looking resplendent in his Liverpool jersey following the side’s 6-1 demolition of Southampton in the League Cup overnight. He was immediately into the action too, opening Under The Gun before eventually folding the river after Donald Civic led on all three streets.

One player yet to take his seat today is Grant Levy. Levy is a local Sydneysider and has a special fondness for The Star, having won the inaugural APPT Grand Final here in 2007 and its $1 million first prize.

He currently sits second in chips with 174,200 and is in no danger of being blinded away anytime soon given blinds are at 1000/2000 but we’ll be keen to see when he arrives.

Dean Blatt was a very early casualty here today, getting it in with AJ just moments after play began but running into the AK of Donald Civic. The board ran out 9 high and Blatt is no more.

Welcome back to PokerMedia Australia and our coverage of the final day of the $5k Challenge at this year’s Star Summer Series.

20 players have returned for today’s play as we prepare to play down to our winner!

The top 5 stacks going into today’s play are as follows:

Already renowned as one of Australia’s elite poker players, Matthew Wakeman added another notch to his rapidly expanding belt this week after winning the $5k Challenge at WSOP Circuit Sydney. Wakeman, who held a dominant […]

2.35am: Final table is set! 14 hours after it began, the 2015 Star Summer Series PMS 6-handed event is down to the final table. Bernie Stang became the final elimination of the day, his fate […]