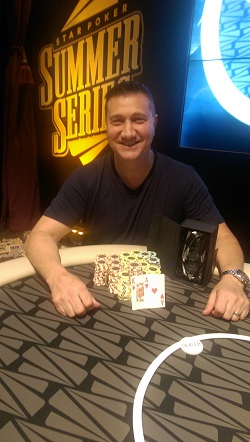 After two long days that began with 153 entries and finished with a see-sawing heads-up battle, Sam Capra has emerged victorious in the $1,100 PokerMedia Australia 6-handed event – taking home $38,250 in the process.

Capra, a regular on the local poker scene, entered the final table sitting fourth in chips and quickly joined 2015 ANZPT Sydney winner Jim Psaros at the top of the chip counts as the field narrowed.

His march towards the title saw him eliminate Michael O’Grady, Craig Duffy and John Caridad in quick succession to enter heads up play in prime position and despite the lead swapping back and forth on multiple occasions he eventually ended Psaris’ run too.

The lead swapped back and forth multiple times but in the end it was Sam Capra emerging victorious after around 90 minutes of heads-up play.

The key hand saw the pair all-in pre-flop with Psaris’ 88 against Capra’s A9. Three clubs on the flop and a fourth on the river gave Capra the flush that propelled him into a dominant chip lead before finishing it off soon after.

On the final hand, Psaris shoved with 78 and was called by Capra’s AK. The board hit Capra hard as it ran out JK5KA – leaving Psaris without a trophy but a handy sum of cash for his efforts.

Sam Capra and Jim Psaris have just done a deal which basically splits their winnings evenly, but Capra may be wishing he waited a bit longer after winning a very tidy pot with QQ on a AJQJ7 board.

He has 1.6 million to Psaris’ 700,000 with both players now seemingly a little more comfortable with throwing some chips around.

7.10pm: Capra doubles into the lead

There was suddenly a flurry of action between Sam Capra and Jim Psaris as the pair got it all in pre-flop.

And it was Capra in great shape to double with pocket Js a huge favourite against Psaris’ pocket 10s. The board provided no surprises and Capra takes the lead.

There is a surprising amount of folding going on for a heads-up battle, but in the meantime Sam Capra has managed to claw his way back to 800,000.

It’s been a fairly uneventful few minutes although Psaris has started re-raising a number of Capra’s opens rather than just calling as he was earlier.

No nibbles as of yet though.

We were about to announce the stack sizes for the start of heads-up play when Sam Capra and Jim Psaris found themselves all-in on a Q93 flop.

Capra showed Q8 but was in trouble against the AA of Psaris. The turn and river bricked to ship a huge pot Psaris’ way!

On the second hand back from the break, John Caridad shoved from the small blind holding KJ and received a call from Sam Capra with AQ.

The flop 548 monotone flop was an ugly one for Caridad, giving Capra the nut flush draw to go with his already dominant hand, and when no help arrived he was out in third.

Players are now on a 10-minute break.

After an early burst, three-handed play has brought about a noticeable slow-down – particularly since John Caridad doubled recently.

The stacks are currently as follows:

John Caridad has been holding on for dear life but has just doubled to keep his hopes of a miracle victory alive.

Just like that, Michael O’Grady’s run has come to an end after he shoved pocket 8s and was called by Sam Capra with AQ.

The board ran out Q67AA and O’Grady heads to the rail.

Sam Capra has just sent Craig Duffy to the rail in a huge clash that has seen Capra storm to over 700,000 in chips.

It began with Capra opening and Duffy calling on the button as the dealer spread a Q3Q flop. Both players checked and an 8 landed on the turn. Capra checked again and Duffy bet 50,000.

Capra announced he was all-in and Duffy snap-called with TT but was in all sorts of trouble against the AQ of Capra. The river was a meaningless 2 and we’re down to four players.

Soon after taking most of Ajay Toolooa’s chips, Jim Psaros finished the job as he got it in with AQ against the short stack’s A6.

The QQ6 flop was a huge one for Psaros as he sent another player to the rail.

The turn brought a repeat 9 and this time Psaros check-called a bet of 125,000. The river was a 3 and Psaros announced he was all-in for his remaining 128,000. Toolooa went deep into the tank and eventually called but mucked when Psaros showed AQ.

John Caridad was down to 100,000 in chips after an earlier clash with Ajay Toolooa but has just enjoyed a slice of luck to double at the expense of Michael O’Grady.

O’Grady held KK against the A3 of Caridad with the money going in pre-flop – an Ace in the window ensuring Caridad lives to fight another day.

Michael O’Grady has been applying the pressure early on at this final table. A few moments ago he shoved over the top of John Caridad’s open – forcing a fold before flashing QQ. Two hands later he opened the pot to 20,000 with Ajay Toolooa 3-betting to 60,000.

Katie Gooden made the long drive home to Bowral last night and the long drive back to Sydney again this morning to be here, but her final table lasted just one hand. The table short stack picked up 88 Under The Gun and was quick to announce she was all-in but ran into the KK of Craig Duffy.

The board ran outAQ247 and Gooden is headed straight back to Bowral.

Welcome back to PokerMedia Australia and our coverage of the final table of the 2015 Star Summer Series PMA 6-handed event.

A field of 153 starting entries has been whittled down to the final seven players each competing for the $38,250 first prize.

The final table seating allocations and chip counts are as follows:

11.30pm: Final table is set! And that will do us for today with the 10 remaining players to return to The Star at 4pm tomorrow to fight it out for the title of PokerMedia Australia […]