Pictured: 2014 Summer Series Main Event Champion Timo Pfutzenreuter. Who will it be this year?

The Star has officially announced the 2015 Star Poker Summer Series. The tournament schedule will see the typical eight events held again, ranging in buy-ins from $330 to $5000. The tournament will begin on Tuesday, November 24 with the ever-popular $330 No-limit hold’em Opening Event and culminate on Monday, December 7 with the final table of the $2000 Main Event.

General Manager of Table Games Operations at The Star, Hugh Fraser, is looking forward to kicking off the summer season, building on the excitement of recent tournaments.

“Now in its 5th year, The Star’s Summer Poker Series is a highlight event of the gaming calendar, proving ever more popular year-on-year, with guests travelling from across Australia, and overseas, to take part in the two-week long tournament.

“Since The Star first offered poker more than a decade ago, we’ve watched as the popularity of the game has soared. To accommodate this growing demand, we developed a world-class purpose-built Poker Room and now offer poker at The Star 24 hours a day, seven days a week.

“I look forward to welcoming attendees for The Star’s Summer Poker Series when it kicks off on 24 November,” concluded Mr Fraser.

The most recent Star Poker major tournament series was the Sydney Championships held in August where Ben Jee was crowned champion of the $3000 Main Event. The Summer Series main event buy-in is slightly less at $2000, a moderate price point where numbers are hoped to approach 350, generating a prize pool of over $600,000 and a winner’s prize of around $150,000.

PokerMedia Australia is proud to enter the fifth year of our association with Star Poker and the Summer Series with the tenth running of the PMA Special Event. Once again our $1100 No Limit Hold’em Event will be a six-handed affair and include one re-entry opportunity. We’re hoping to have a field of over 150 entries to match the efforts at the Sydney Champs earlier this year. Keep up to date as the action happens with our live reporting team, who will also be covering the $5k Challenge Event and the Main Event.

To register or for further event details go to Star Poker. 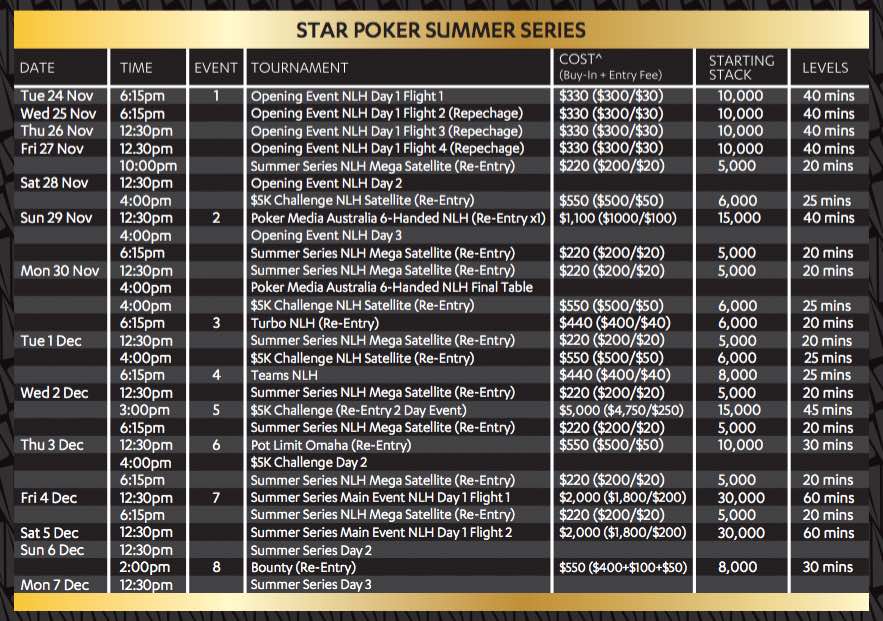