Jee gets it done 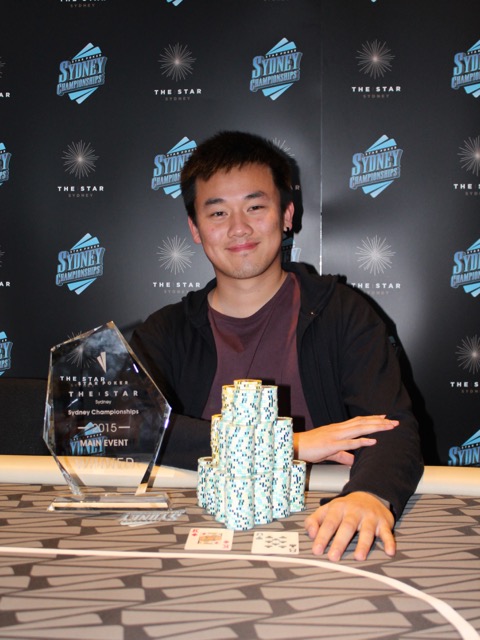 On a board of Kh Jd 9s 4h, Yusuf Dib bet 300,000 into a building pot. Ben Jee (pictured) called. An 8h came on the river. Dib considered his options for a moment before confidently moving all-in for his remaining 1.9m in chips. Jee became a little unsettled, clearly wanting to call. He muttered that he probably can’t get away here. He eventually called and turned over Kd 8c, having hit two pair on the river. Dib tabled Ks 4d, a little frustrated in the river card, having the smaller two pair.

With that, Yusuf Dib goes out in 2nd place ($127,855) and Ben Jee is crowned the new Sydney Championships Main Event champion!

Thanks for following along with our coverage over the Sydney Championships and particularly the Main Event. We look forward to bringing you more poker coverage soon.

Ben Jee is now using his stack to his advantage. He’s now up near 7m in chips whilst Yusuf Dib continues to go backwards, on 1.4m. We heard Dib mentioned to Jee, “don’t worry, it’ll be over soon.” Jee chuckled, hoping he will be right! 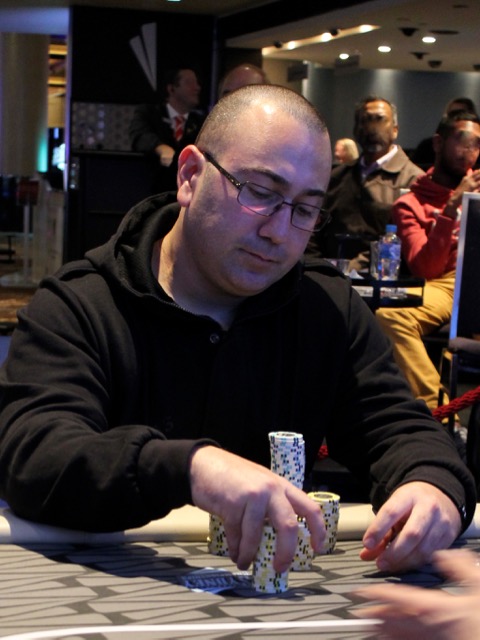 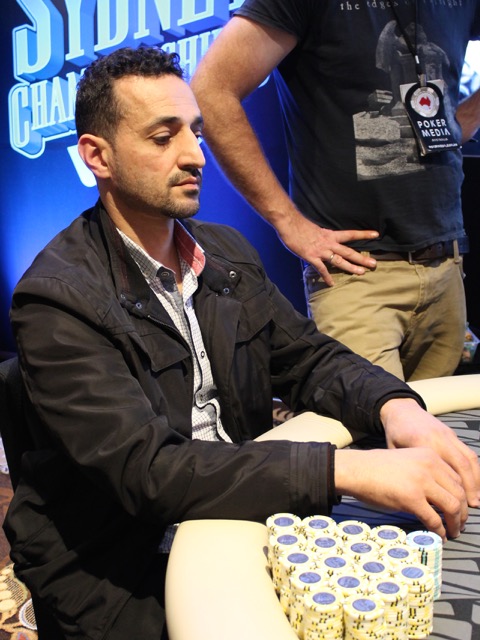 On a board of A A 5 K 8, Yusuf Dib bet into the pot, Adam Hamkin (pictured) re-raised all-in and Dib called, having him covered. Hamkin tabled K-3 to Dib’s K-Q, ending Hamkin’s tournament.

Heads-up play will now begin between Dib and Ben Jee. Dib has 5m in chips while Jee has 3.5m. 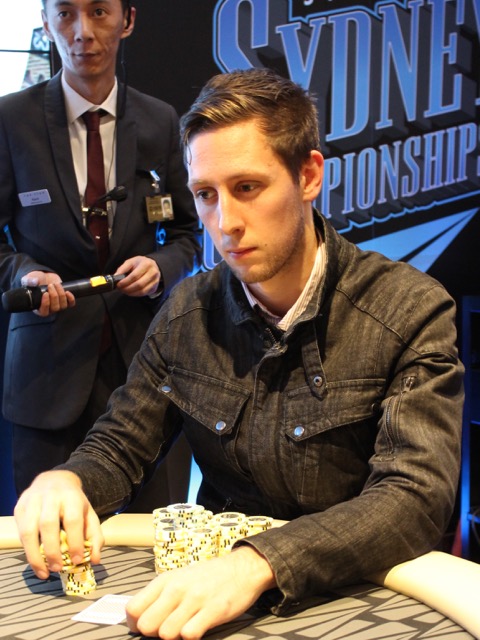 In pre-flop action, Sam Steidle (pictured) was all-in with his tournament life on the line against Yusuf Dib. Steindl held 8-8 and Dib A-K. The board ran out Q A 2 3 Q to award the hand to Dib, sending Steindl to the rail in a well-deserved 4th place. Current chip counts are: 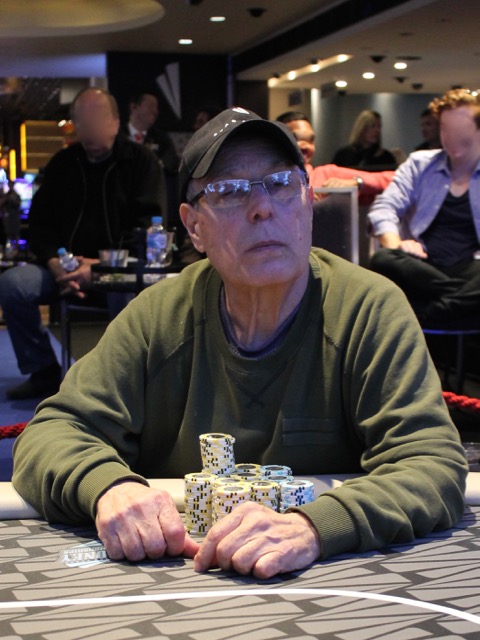 Tony K (pictured) shoved in mid-position to 560,000. It folded around to Sam Steindl in the big blind who instantly called. Steindl showed Q-Q to Tony K’s 2-2. The flop came down Qh 7h 10h 6h 5c to send the pot to Steindl and see Tony K make his exit. Steindl jumps back up to 1.4m in chips.

On a board showing 8h Ac 7c 2d, action erupted on the final table (compared to much of this level). Yusuf Dib bet 150,000, Tony Kambouroglou responded with a raise to 500,000, and Dib tanked for a while before moving all-in. Tony K snap-called and Dib rolled over As Ah, Tony K 7-7 for the lesser set. The river was a 3s sending a massive double to Dib and crippling Tony K, now down to 420,000. Dib takes over the lead with 2.9m in chips.

Shuffling the chips around 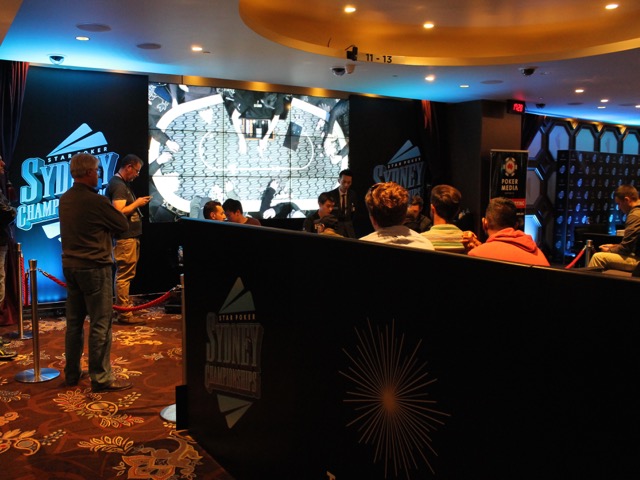 While the players continue to shuffle the chips between themselves, we thought we’d display part of the new poker room and the space where the final table is being held. As you can see above, the final table is being televised on the big screen and a number of smaller screens around the room. The Star have also erected a viewing area where people can watch the table and the screen as the action takes place. We think it looks great!

During the break a deal has been discussed. Perhaps this will continue to keep things moving given they all have over 1m in chips. When play starts again they will enter level 24 where blinds will be 15000/30000 with an ante of 5000.

Players are currently on another 10-minute break while they look to fix the automatic shuffle machine in the table. The current chips counts are as follows: 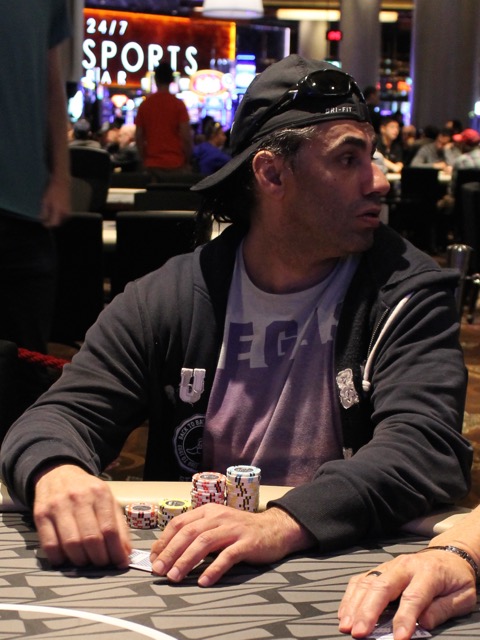 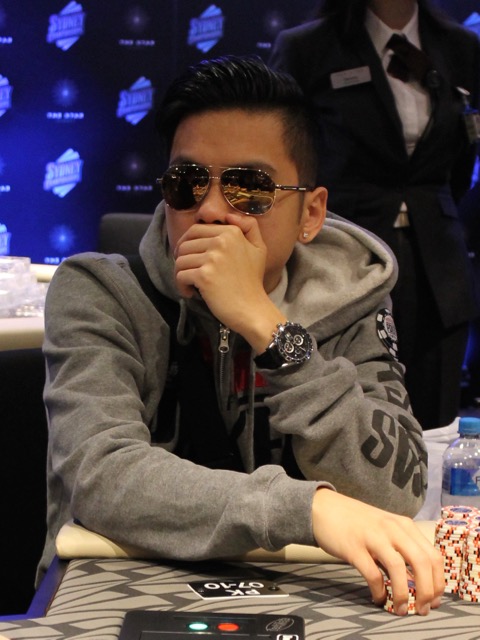 In one of the first hands of the final table, Tony Kambouroglou raises to 60,000, Adam Hamkin calls and Duy Quoc Vu (pictured) pushes all-in for his remaining 250,000. Tony K decides to call while Hamkin gets out of the way. Tony K tables J-J to Vu’s 6c 6h. The board comes J 9 9 K 5 to knock Vu out of the tournament. 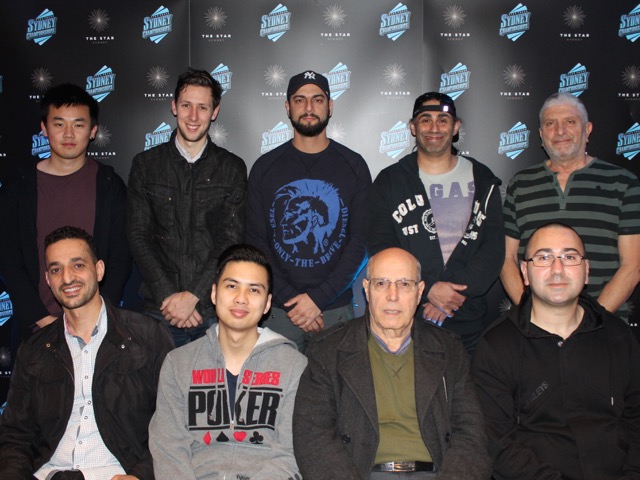 The fine gents at the final table

And there she blows

Peter Matusik’s tournament ends in 10th place as the final table is now set. Matusik had his remaining 24,000 in chips in the middle when Ismail Ismail isolated him, raising to 61,000, holding Ks Qh. Matusik’s 8d 3d blanked out as the board ran out Jh 10h 4c Kh 4h.

Players are now on another 10-minute break ahead of the final table beginning.

The final table of nine players is likely not far away as Ismail Ismail destroys Peter Matusik. Ismail held K-9 to Matusik’s A-Q but when a king hit on the flop, Matusik was left crippled with only 27,000 in chips. Ismail is up to 400,000.

Charbel Boustani has doubled through Peter Matusik when his K-K stayed ahead of Matusik’s A-K when all-in pre-flop. Boustani stays alive with 300,000 in chips while Matusik drops to 355,000. 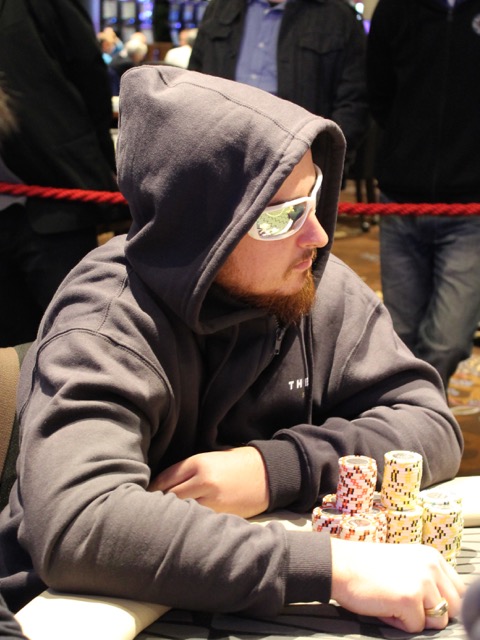 In other recent news, Henry Szmelcer has had his tournament ended by ‘Toothpick’ Tony Kambouroglou. Szmelcer held Ks 8s to Tony K’s A-K. The board ran out 6 10 K 6 9 to knock Szmelcer out in 12th position for $11,802. Tony K now has 1.3m in chips.

Henry Szmelcer has doubled through Adam Ratten when his K-Q beat out Ratten’s pocket jacks as the board came 9s Ks Ad 7c 8s. Szmelcer moves to 500,000 in chips while Ratten drops down to 270,000.

Rolfe out in 14th 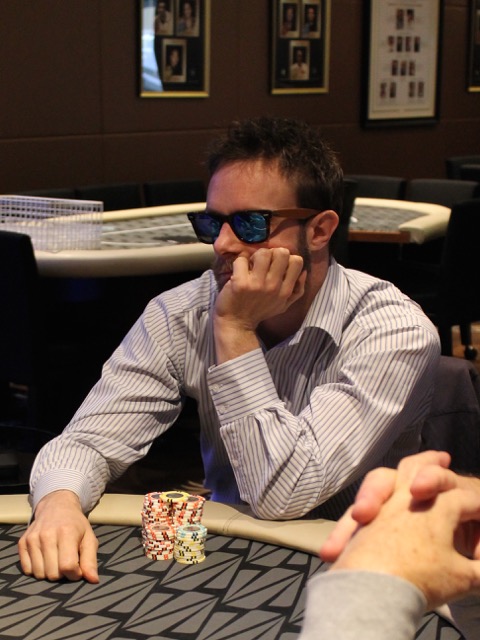 Matt Rolfe (pictured) pushed all-in for his remaining 150,000 and received the call from Michael Fraser. Rolfe tabled Ac Qh to Fraser’s two black sevens. The board failed to hit anything for Rolfe, running out 10 2 6 10 6 and ending his tournament for $10,228.

Players are on their first break of the day for 10 minutes. 14 players still remain. The current chip counts are:

A bit of action 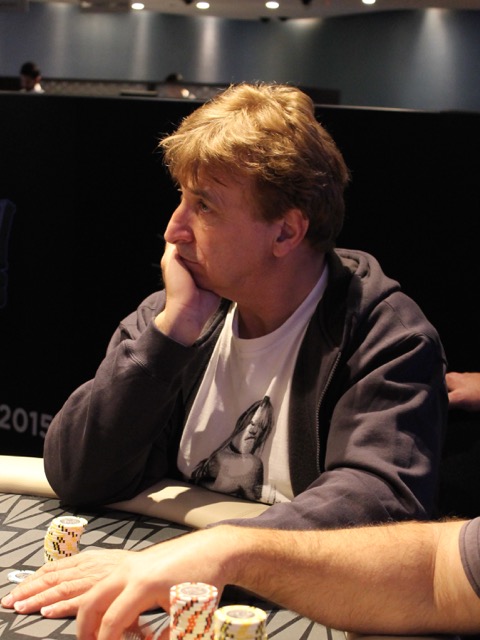 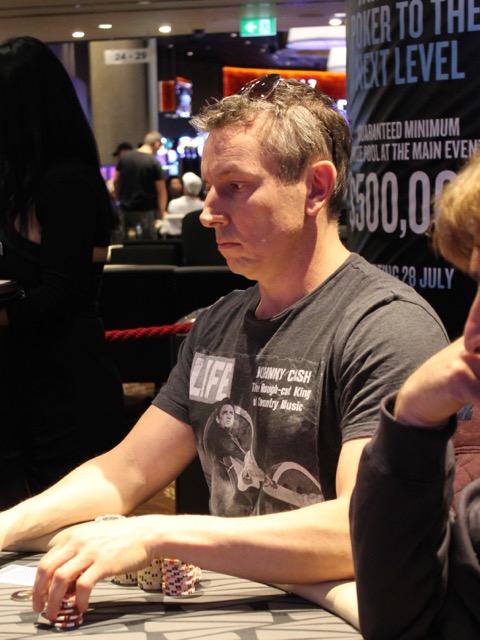 With regular shoving from the short stacks, it was bound to happen that someone would get covered. Sam Steindl and Nick Williams (pictured) were at it again when Steindl raised it up to 35,000, Williams going all-in for his remaining 109,000, and Steindl calling. Williams tabled Ah 10h to Steindl’s Ad Jd. The board came Qh 2c 5c Qs 7h to knock Williams out of the tournament in 16th place for $9048. Steindl moves back up to 1.04m in chips.

The short stacks are getting their chips into the middle and coming up trumps at the moment. In most recent action, Sammy Lucisano shoved pre-flop for his remaining 103,000 in chips and was called by Sam Steindl. Lucisano tabled As Ks to Steindl’s 9d 10d. The board ran out 9s Qd Kh 2h 4s to double Lucisano up to 270,000 in chips. Steindl still has plenty, sitting on 900,000, having taken all but about 100,000 of Nick Williams’ chips when he rivered a flush.

A short stacked Charbel Boustani pushed all-in and was called by Ricardo Faura. Boustani turned over As Ad to Faura’s Ac Ks. The board was no help to Faura who doubles Boustani up to 230,000 in chips. Faura drops to 200,000. 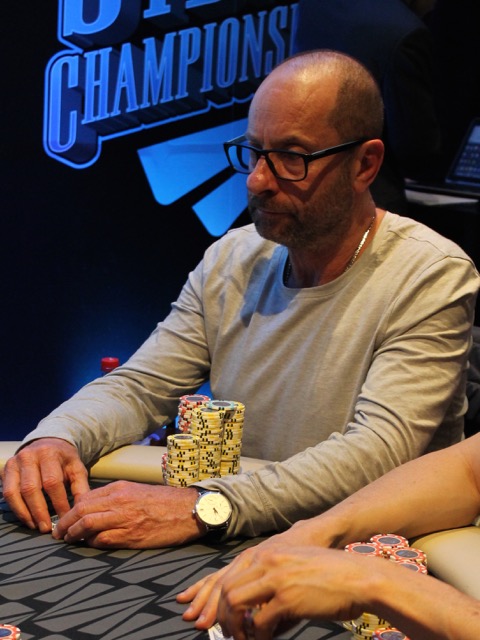 Nicholas Roth (pictured) has continued to lose chips, open shoving this time for 154,000. ‘Toothpick’ Tony Kambouroglou calls tabling Kh Kc while Roth rolls over Ac 7h. The board runs out 9d 3s Jd 5c Qs to knock Roth out of the tournament in 18th place for $9048. Tony K moves up to 1.1m in chips.

Fraser powers to the lead

When two blinds go to war

Nick Williams has doubled through Nicholas Roth when Williams woke up with A-A in the big blind and Roth with K-K in the small blind. With the money all-in pre-flop, the board ran out Qs 6c 5h 5s 3d to double up Williams to 500,000, while Roth keeps dropping, now down to 200,000 in chips. 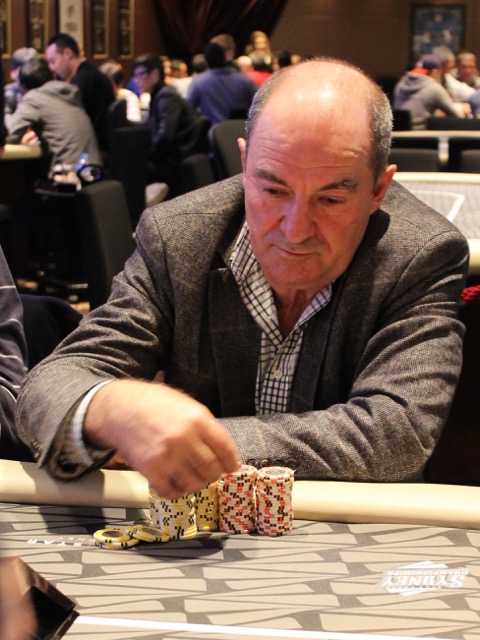 Constantin Stanciu (pictured) has been eliminated in 21st place at the hands of Matt Rolfe. Stanciu was all-in on a board of 5 2 3 J A with 3-7 but Rolfe could do slightly better, turning over 5-6.

The tournament is also over for Tien Pham who hits the rail in 20th place. Pham was all-in with A-10 but Sam Steindl woke up with Q-Q. On a jack-high board, Pham can’t improve and Steindl delivered the knockout.

Play is underway with players entering level 20 where blinds are 6000/12000 with an ante of 2000. The average chip stack is just over 400,000, with 7 of the 21 players starting with that amount or greater (see starting stacks in initial post below).

We’re back in the Star Poker room with play about to resume in the $3000 Main Event, where 21 players remain. There were 281 runners across two Day 1 Flights, which generated a prize pool of $786,000. Play will continue today until a winner is crowned. The final 30 players have made the money with payouts as follows. We hope you enjoy the coverage today.

Play will resume at 12.30pm from The Star poker room. Chip counts going into the final day are:

Honglin Jiang leads field into PMA $1k Special final table It’s been a long, colourful and eventful day here at The Star for the running of Event 3 of this year’s ANZPT Sydney – the […]