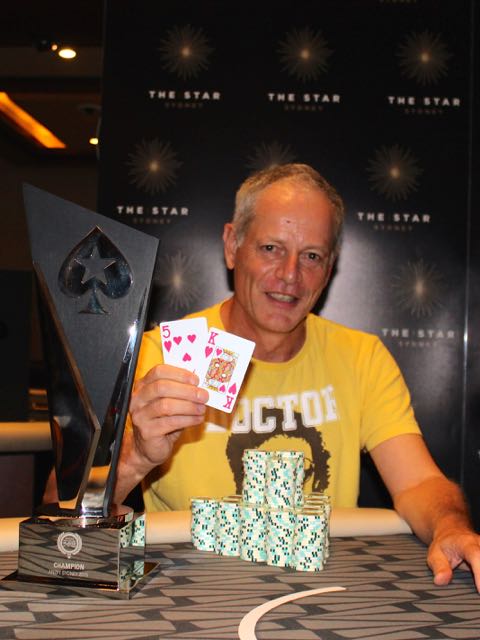 On a board of Jh-Qh-Qc, Emanuel Seal went all-in for his remaining 1.7m in chips, having steadily fallen behind Jim Psaros over the previous 45 minutes. Psaros weighed up the situation and decided to call, tabling Kh-5h. Seal turned over 8h-4h. The turn was a 2s, the river a 5c, the river card music to Psaros’ ears (and his entourage).

Thanks for following along throughout the series. We look forward to being back with you at the Sydney Championships from the Star. We’ll be posting the final payouts on pokermedia.com.au and you can check starpoker.net.au for further details.

It’s a tough head’s up battle with neither gent wanting to lay down. Apparently a new deal has been done where each player with receive $175,000 with the winner getting an extra $8,000 and the trophy. Jim Psaros has around 5.2m in chips while Emanual Seal has 3.7m.

In pre-flop action, Emanuel Seal (pictured) raised two 225k, Jim Psaros made it at total of 625k which Seal called. The flop came A-7-K. Psaros checked, Seal went all-in and Psaros snap-called. Seal turned over A-6 to Psaros A-9. Psaros stayed ahead as the turn came 10 but on the river a 6 fell to make Seal a two pair. Seal is now 5.5m in chips, Psaros 3.4m.

The final two players have returned and it’s first blood to Jim Psaros who takes down a big pot. In pre-flop betting, Jim made it 675k which Emanuel Seal snap-called. The flop came Q-6-A. Psaros checked, Seal fired 700k, which Psaros called. The turn came 6 and both players checked. The river came a 5 to which Psaros bet 1.2m. Curly considered things and folded. Curly sits on 3.8m while Psaros is up to 5.1m in chips.

The heads-up battle between Emanuel Seal and Jim Psaros has begun. Psaros has 5m in chips while Curly has just under 4m.

After one more hand ends, the gents are now on a 15-minute break. 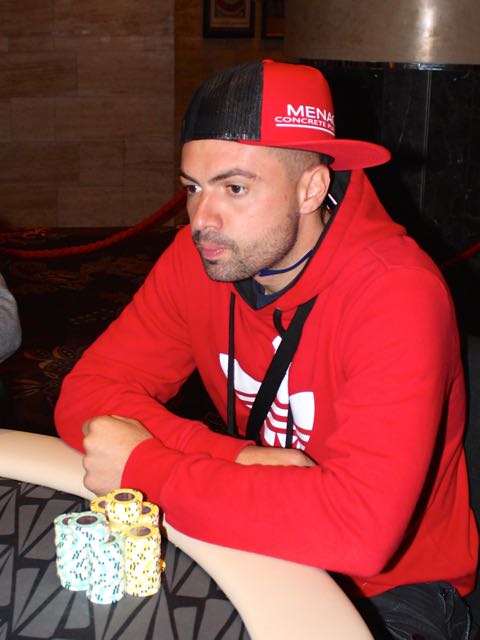 On a board of 4-2-7-8 Denis Sekuloski (pictured) bet 140k, Emanuel Seal pushed all-in over the top and was snap-called by Sekuloski, turning over K-K. Seal tabled 2-2 for trips and the 9 on the river couldn’t help Sekuloski who busts out in 3rd place.

The three remaining players are raising and re-raising each other but not letting it get out of hand. We’ve seen a few flops and the occasional turn card but the raises have brought about folds each time. The chips have therefore flowed across the table, with approximate chip counts: 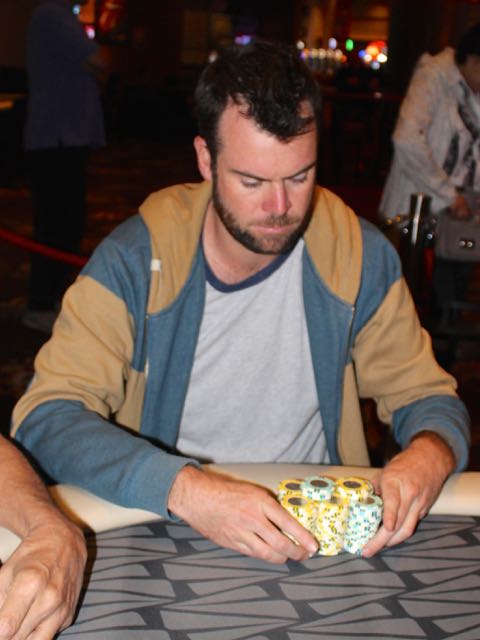 And just like we lose another player. Murray Roach (pictured) was all-in with A8 against Emanuel Seal’s JJ. Seal stayed ahead, sending Roach out in 4th place. 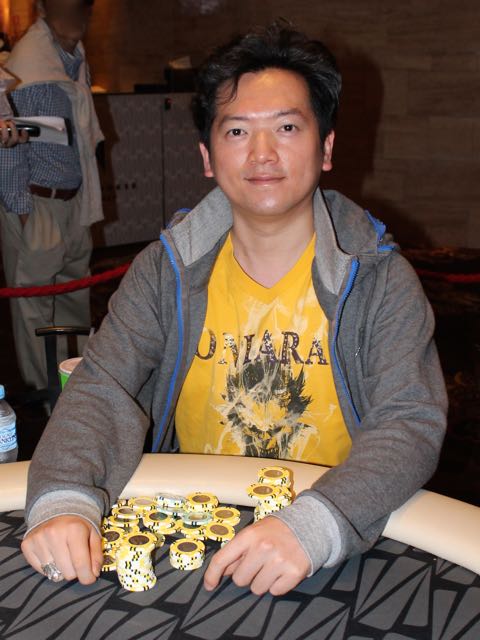 Li-ta Hsu (pictured) was under the gun and shoved for his remaining 500k. Jim Psaros in the big blind woke up with Aces and called the bet. Hsu turned over A-J and got no help from the board, sending him to the rail in 5th place.

Is some pre-flop betting where Denis Sekuloski raised to 125k, Jim Psaros re-raised to 375, Sekuloski called. The flop came 5h-7s-9h. Psaros bet 545k to which Sekuloski went into the tank. Murray Roach eventually called time on him and within the last second, Sekuloski called. The turn came 4s and Psaros went all-in for his remaining 500k. Psaros had stated in the banter with his opponent that he’d go all-in on the turn so hurry up and make a decision, “I don’t lie unless I have to,” he said . Psaros then started to walk away, being called back by Star Poker staff to stay with his cards. Psaros replied, “I was just going to go play craps for a while because it’ll take that long for him to make a decision.” Sekuloski eventually folded, commending Psaros on his play.

Psaros is back up to 2.3m in chips while Sekuloski drops to 1.5m.

There’s been some movement with chips moving from Jim Psaros around the table. Psaros doubled Li-ta Hsw earlier then lost another big pot to Denis Sekuloski. Sekuloski then lost a pot to Hsu, then Sekuloski lost another to Curly Seal. In that hand there was some initial pre-flop betting which got checked down to the river, with the board Ah-2h-8s-4d-8h. Sekuloski had talked up that he thought he was good but after a tester bet from Sekuloski of 60k, Seal made it 310k which Sekuloski eventually called. Seal had made his flush, tabling Jh-9h. Sekuloski said, “my mistake, I should have fired on the turn.” To which Seal replied, “Yep, then I would have gone away.”

Li-ta Hsu has taken the slight chip lead with all players having reasonably even stacks. Hsu was able to take a few chips off Denis Sekuloski when he pushed him off a hand with a bluff. Approximate chip counts are now:

Li-ta Hsu has had the smallest stack but has built it to be the tallest. It will now have more substance after Jim Psaros lead out for 135k pre-flop, Hsu went all-in for another 675k which Psaros called. Hsu tabled K-7 to Psaros’s A-Q. The board ran out 10-7-5-3-10 to put Hsu ahead. He’s now dented Psaros’ stack a little and now approaches 1.4m in chips.

Players are on a 15-minute break. Approximate chip counts are:

Levels are now 75 minutes long and with about 25 minutes left in this level the approximate chip counts are: 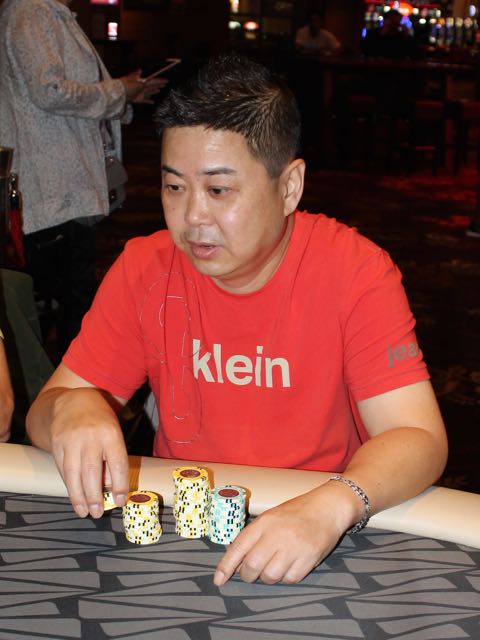 And just like that we lose another player. Zhi Ma (pictured) had his tournament life on the line against Denis Sekuloski yet again. Ma tabled As-Ks while Sekuloski had Q-Q. The board didn’t help Ma with either his spades or over cards and his busted in 6th place. 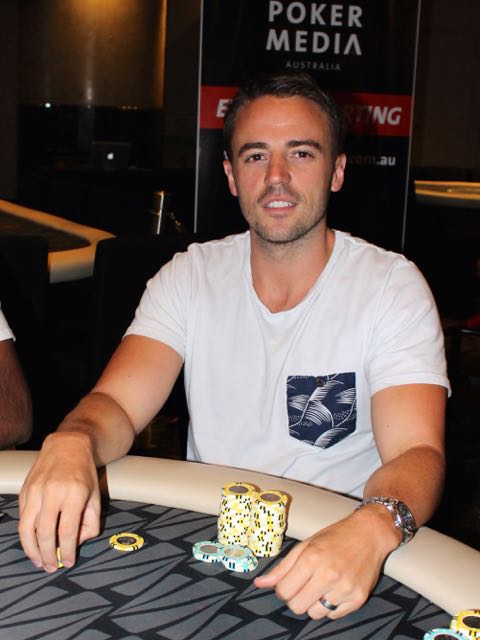 In pre-flop action, Denis Sekuloski raised to 200k, Tom Rafferty (pictured) with only 190k left announced all-in, while Curly Seal folded. Sekuloski tabled 4-4 (a bit of a joke at the table as he’s twice had pocket fours and made a pair of fours in an early hand) while Rafferty had Q-10. The board ran out 7-8-9-4-10 to keep the fours lucky for Sekuloski, sending Rafferty out in 7th place. 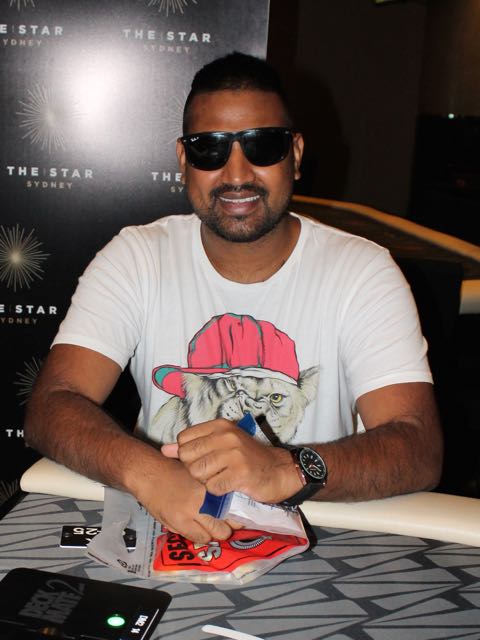 Shaneel Chand (pictured) pushed all-in pre-flop for his remaining 180k which was called by Zhi Ma. Chand tabled 2-2, Ma A-J. The board ran out J-9-9-7-K to send Chand to the rail in 8th place. 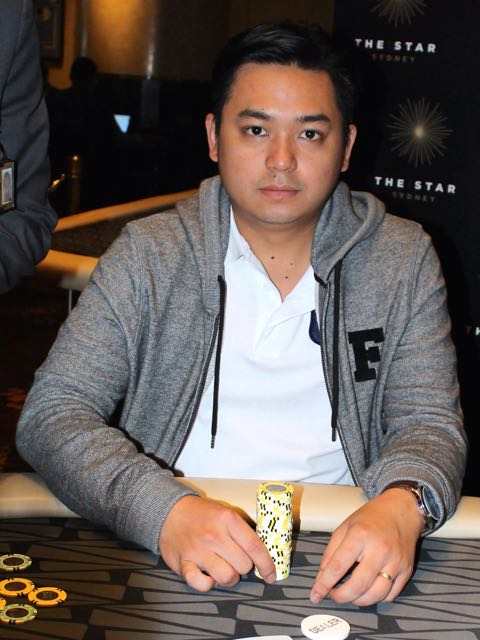 With Jim Psaros, Li-ta Hsu and Denis Sekuloski getting into the hand pre-flop, Chung Liew (pictured) in the big blind went all-in for his remaining 80k. All gents saw a flop of As-4c-10c. Psaros checks, Hsu makes it 100k, Sekuloski calls while Psaros folds. The guys then check down to the river with the two cards coming 9-2. Sekuloski turned over 4-5, Liew A-6 while Hsu had A-8, winning the hand with his 8 kicker. Liew hits the rail in 9th position.

In pre-flop action, Emanuel Seal lead out for 100k when it came to Danis Sekuloski in the big-blind. He asked Curly how much he had left (780k) and proceeded to go all-in (with 1.5m). Curly thought for some time before making the call, turning over J-J. Sekuloski had 10-10 with the Jacks holding up as the board blanked out.

2.15pm: Rafferty with another decision

On a board of 6s-7c-As-8s-7s Murrary Roach fired 300k into a pot of about 300k. Tom Rafferty appologised to the table in advance stating his decision will take a little time. He eventually called. Roach tabled 6d-6c for trips and Rafferty mucked, not having the flush!

Tom Rafferty found himself all-in for his remaining 480k with Shaneel Chand. Rafferty had 9-9 v Chand’s A-9. The board blanked out for Chand with J-K-7-10-K to take Rafferty to 800k while Chand drops to 300k in chips.

Play has started midway through level 25 where blinds are 20,000/40,000 and an ante of 5000. Chung Liew did remarkably well to hang on last night but will need to double up pretty quickly to stay in the race. 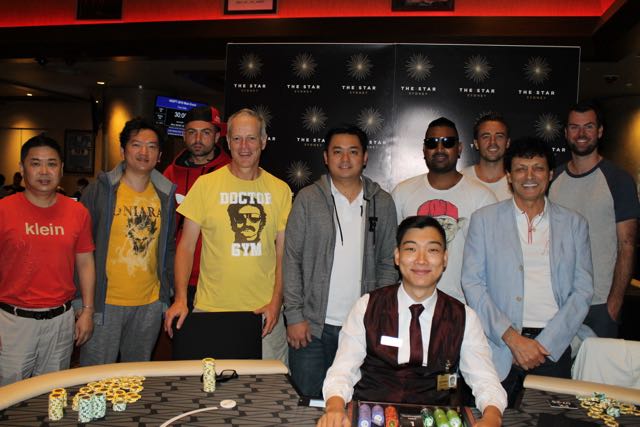 Welcome back to The Star where the final table of the ANZPT $2300 Main Event will be played out today. The starting chip counts are as follows:

Play will commence at 2pm on Monday, March 23.

Welcome to the live reporting of the 2016 Sydney Championships from The Star. The final table of the Pot Limit Omaha event began at 9pm after the field of 141 was whittled down to nine. […]

1.25am: Tom Rafferty wins $5k Challenge ($152,500) Tom Rafferty (pictured) has emerged victorious after a long two days featuring a marathon 3-handed battle at the final table. But when it ended it ended quickly. First, […]

Event reporting brought to you by:   End of play, day 1 flight 1 Flight 1 of the ANZPT Main Event has now been completed and for sure the story of the day is Jazz […]