Chip counts of those that survived Day 1 Flight 1 are as follows:

Play has finished for the evening.  Sayed Jabbour is the chip leader while Octavian Voegele is second.

Join us later today (Friday) at 12.30pm when the second Day 1 flight will begin.

Chip counts of those coming back for Day 2 on Saturday will include:

The clock has been stopped with fifteen minutes left in the level. All tables will now play three more hands and then bag up their chips.

Grandpa in my pockett

Ben Pockett had been nursing his short stack for most of the day and only said to us at the start of this last level that he just wants to double up once and he’ll be happy for a return on Day 2. Well, his wish has come true. On a flop of 7-2-3 there was some standard action to which Pockett and his opponent remained. The turn came 3 to which player X bet 11k. Pockett announced all-in for his remaining 20k which was called. Pockett turned over 2-2 for trips to his opponents 5-7 for top pair. The river came an A to seal the double up. Pockett is now up to 63k.

A couple of players have reached the 100k chip mark while the number left in the field is 91 of the confirmed 189 starters for the day.  Various chip counts are follows:

One more level to go

I don’t know about the players but I’m starting to turn into a pumpkin. Level 6 is now complete with 100 players remaining from the 189 total entries (this number has been adjusted down slightly). There’s a short 10-minute break ahead of level 7 that will bring blinds of 400/800 and an ante of 100. This will be the last level of play for the night. 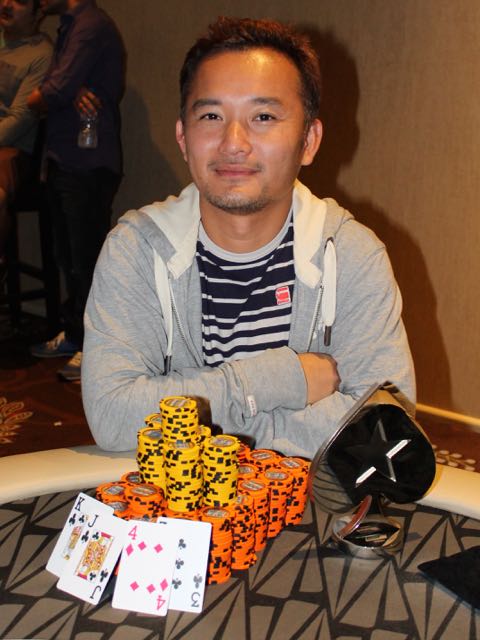 Tam Truong (pictured) has performed well yet again to win the $550 Pot Limit Omaha re-entry event for $14,023. He was able to overcome Michael Guzzardi in heads-up play who won $9,690 for his troubles. Geoff Henshaw finished third, Sam Khouiss fourth and Mel Judah 5th. 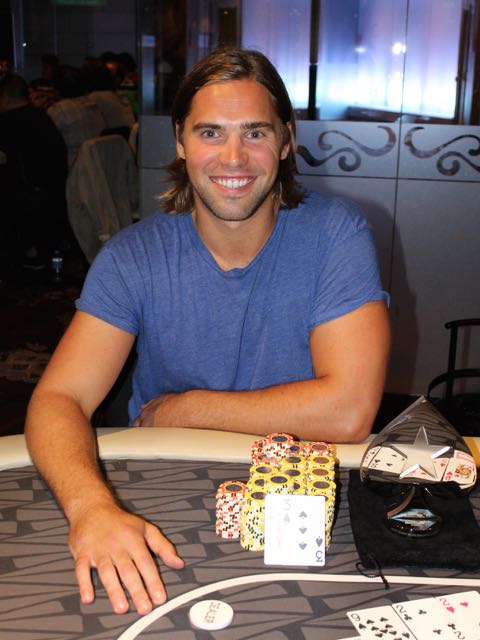 The $5k Challenge has recently finished with Elliot Smith (pictured) the winner after a long tussle with Joel Douaglin. The head’s up battle went back and forth for some time but in the second last hand, on a board of 2-8-7-5, Douaglin started the betting, Smith re-raised, Douaglin announced all-in which Smith called. Douaglin turned over J-J while Smith had made his straight on the turn holding 9-6. This crippled Douaglin to the point of no return and Smith took home the bacon and the first prize of $116,850. Joel Douaglin won $77,900 for his well-deserved second place.

Jeff Lisandro is another player knocked out of the Main Event. 122 players remain with the average chip stack at 31k.

Play is still going in the $5k Challenge event which re-started at 2pm today with 15 players. It’s currently heads-up with a couple of experienced internationals in Joel Douaglin from New Caledonia, who was third in the Aussie Millions main event earlier this year, and Elliot Smith, the Canadian who himself finished 3rd in the Aussie Millions main event in 2009. Douaglin has a slight chip lead.

Onto the next level

Players have returned from their break to face level 5 where blinds are 200/400 with an ante of 50. 168 players still remain from the 195 that have entered so far.

Players are now on a 20-minute break. 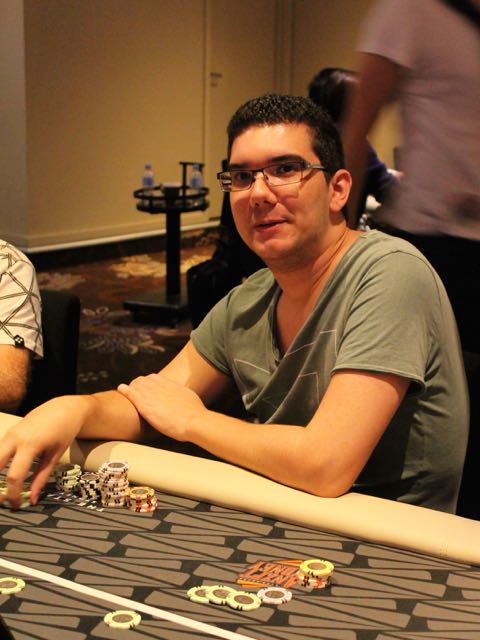 Michael Kanaan (pictured) has recovered somewhat to an average stack after dropping down to only 4k. The average stack is 23k.
Various chip counts at the end of level 4 include:

Some of the current chip counts towards the end of level 3 include:

Daniel Neilson, Sam Capra and Tyron Krost (all pictured above L-R) have been seated next to each other at the same table. However, it hasn’t worked our well for Neilson in particular as he’s already hit the rail. Capra sits on 21k while Krost has about 14k. 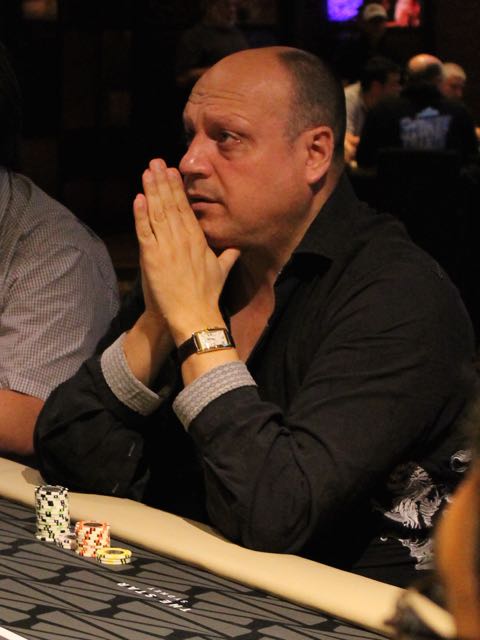 Jeff Lisandro (pictured above) is one of the biggest names in the field today. He’s sitting on around 28k in chips, above the average of 20k, but he may also benefit from a little praying, ’give me a big hand, give me a big hand.’

A few others pop in

A few others have joined play including Tyron Krost, John Caridad, Robert Spano and Bryan Huang. We also ran into Billy ‘The Croc’ Argyros in the break who confirmed he’ll be a late registration for the flight tonight.

Players have returned from their 10-minute break to face level 3 where blinds are 100/200 with an ante of 25 now introduced.

A bit of relief

Players are now on a 10-minute break to go get a quick bite to eat, relieve themselves, have a smoke or just chill out.

Who’s in the field?

One down, six to go

Level one has been completed and all players remain. 178 have currently entered. Blinds have now increased to 100/200.

The number of entries is creeping up, now at 165. Tables are set for 10-handed play, although most tables have at least one stack without an owner.

Live reporting for this event is proudly brought to you by PokerMedia Australia partners The Inside Word who provide detailed sports betting analysis, and insightful, independent commentary about local and international sports. Check them out!

Fifteen players started Day 2 in the $5k Challenge and currently seven remain. Rory Young and Emanuel Seal were part of the starting pack but have since busted. Michael Kanaan is still in with a chance, although he could do with a chip up given a couple of big stacks having developed at the table. The winner will receive a little over $116,000.

Play is underway in the Main Event

Play has just started with blinds at 50/100. 157 players are listed as having entered so far. Registration will remain open until the end of the third break or if we reach sell-out of about 250 players.

Star Poker manager Stephen Ibrahim has announced that the plan is to play to the end of seven levels tonight. Each level is an hour long, with a 20-minute dinner break and a number of 10-minute breaks along the way. That should take us to about 2am in the morning.

Welcome to our coverage of the 2015 ANZPT series live from The Star poker room in Sydney. Today sees the first of two Main Event Day 1 flights with play scheduled to get under way at 6.15pm. The tournament buy-in is $2300, levels will increase every hour and players will start with 20,000 in chips.

Last year’s main event saw 458 entrants play for a near $1m prize pool. The most recent Star Poker Summer Series Main Event attracted 345 at a $3,000 entry point, so participation is expected to be solid yet again. Satellites having been running for some time now so that should bode well for a decent field.

Last year’s winner, Joshua Redhouse, was crowded champion for over $130,000 after a four-way deal was done. He joined Dinish Alt who won in 2013 and Gordon Huntly, the 2012 winner, who have made recent ANZPT Sydney history.

PokerMedia Australia is proud to enter the fifth year of our association with Star Poker after the tenth running of the PMA Special Event was held over earlier this week. Congratulations to the winner, Michael Seymour, who won almost $30,000 after a deal was done heads-up.

So stay tuned for a big night of tournament poker with play to begin shortly.

Sydney’s Van Nguyen has bagged close to 900,000 in chips after a huge elimination in Day 1A of the WPT League Sydney QPC Main Event. The Sydney local was rocksteady amidst the frenetic action across […]

South Australian ex-pat Chin Wang has defeated a field of 161 entries to win the Star Gold Coast Champs $660 Big Wave. Now residing in Queensland, Wang was ecstatic to have finally laid claim to […]