The 2015 ANZPT Sydney poker series is fast approaching. Held at The Star in Sydney, this year will see eight events conducted with buy-ins ranging from $330 to $5000. The tournament series will begin on Wednesday March 11 with the $330 No Limit Hold’em Opening Event and culminate on Monday March 23 with the final table of the $2300 Main Event.

Last year’s main event saw 458 entrants play for a near $1m prize pool. The most recent Star Poker Summer Series Main Event attracted 345 at a $3,000 entry point, so participation is expected to be solid yet again. Satellites having been running for some time now and will continue until the start of the main event. The final scheduled live satellite will be held on Wednesday March 18 at 6.15pm for $500 where one-in-five seats will be awarded to the Main Event.

Last year’s winner was Joshua Redhouse who was crowded champion for over $130,000 after a four-way deal was done. He joined Dinish Alt who won in 2013 and Gordon Huntly, the 2012 winner, who have made recent ANZPT Sydney history.

PokerMedia Australia is proud to enter the fifth year of our association with Star Poker with the tenth running of the PMA Special Event. Once again our $1100 No Limit Hold’em Event will be a six-handed affair and also include one re-entry opportunity. We’re hoping to again have a field in the vicinity of 120 players. Our live reporting team will be on hand and will also be covering the Main Event. 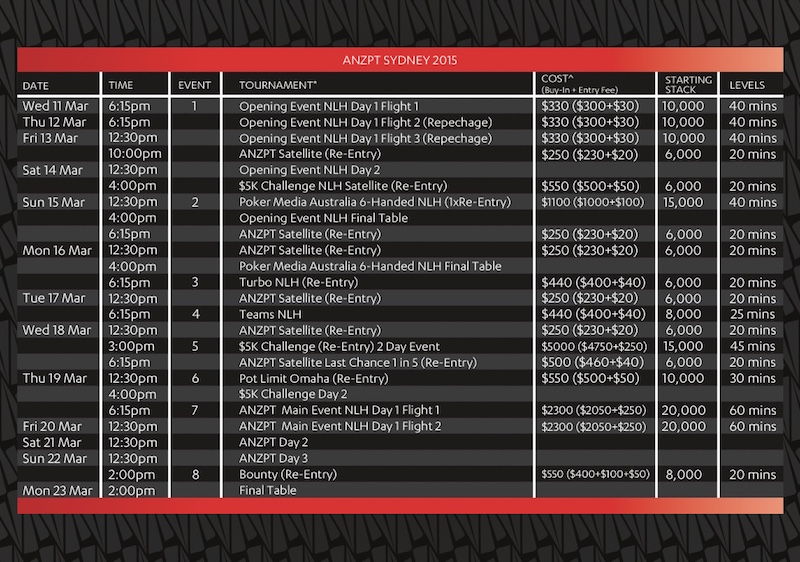 STAR POKER: Tam’s the man on day 1B in Sydney Champs Main Event

David Tam leads the field into day two of the 2012 Sydney Poker Championships Main Event after another eight levels of action on day 1B in the Sports Theatre at The Star. A total of […]

Mladen Avramovski played his first tournament at The Star more than three and half years ago. It was an auspicious debut, with Avramovski placing second in that Anzac Day special event and taking home almost […]

A total of 175 players will return to Star Poker today for day two of the ANZPT Sydney Main Event with the UK’s Ashley Mason (pictured) holding a comfortable chip lead. A huge line-up of […]