The 2014 Star Poker Summer Series schedule has been released. This year will see eight events held ranging from $330 to $5000 to enter. The tournament will begin on Wednesday November 26 with the $330 NLH Opening Event and culminate on Monday December 8 with the final table of the $2000 Main Event.

The Star poker room is continuing to be one of the most popular tournament and cash venues in the country. Most recently it held the APL Showdown event with large numbers of ‘pub poker’ players filtering through, experiencing the world-class tournament services on hand. In August a successful Sydney Championships series was held where 235 runners played for a prize pool of over $650,000 in the main event.

The Summer Series this year will be hoping for similar numbers, with the schedule very similar to the Sydney Championship series. The main event will remain a $2000 event for the second year running, having been a $5000 event in 2011 and 2012. Last year it was Tristan Bain who was crowded champion for $281,685 when the Summer Series teamed up with the NPL and APT to run a super series. Bain joined Joel Feldman who won in 2012 and Andy Lee, the 2011 winner, who have made recent Summer Series history.

PokerMedia Australia is proud to enter the fourth year of our association with Star Poker and the Summer Series with the ninth running of the PMA Special Event. Once again our $1100 No Limit Hold’em Event will be a six-handed affair and include one re-entry opportunity. We’re hoping to have a field of over 100 players to match the efforts at the Sydney Champs. Keep up to date live during the event with our live reporting team, who will also be covering the Main Event. 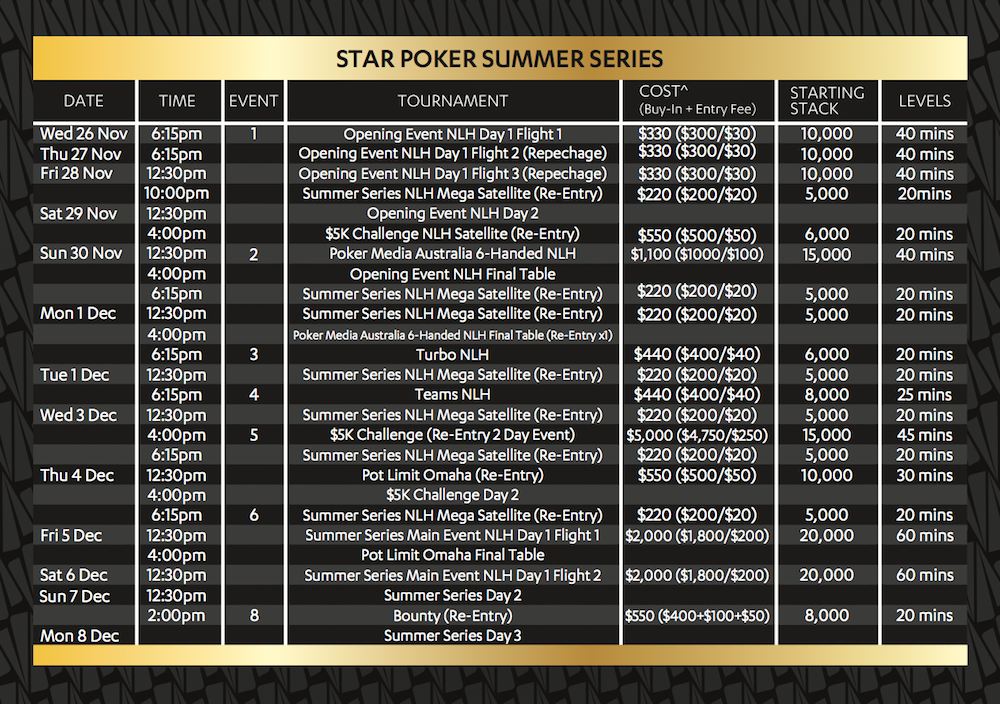 As players took to the felt for the Sydney Poker Champs $1650 Main Event starting with tonight’s (Thursday’s) first flight, several players have already tasted success as part of the preliminary schedule. Having already tasted […]

The only mixed event on the Star Poker Summer Series schedule was a Pot Limit Omaha/No Limit Hold’em affair, which drew a field of 60 players and created a prizepool of $24,000. Despite the presence […]