The 2014 Sydney Championships Main Event Day 1 Flight 2 is now complete. 125 players began the day and 74 remain (subject to final counts), who now qualify for Day 2 tomorrow. Daniel Neilson kept near the chip leaders for much of the day but was pipped by Esan Tabrizi (pictured) for the lead who gained a bunch of chips towards the end of play. Closely following are Musang Kim and Lukas Byrns, players who will be well placed to go deep in Day 2. Unfortunately for Joe Hachem he didn’t make it through, busting in the last 20 minutes of play. Other notables to make Day 2 include Grant Levy, Tony Hachem, Jarred Graham and Suzy Khouis. 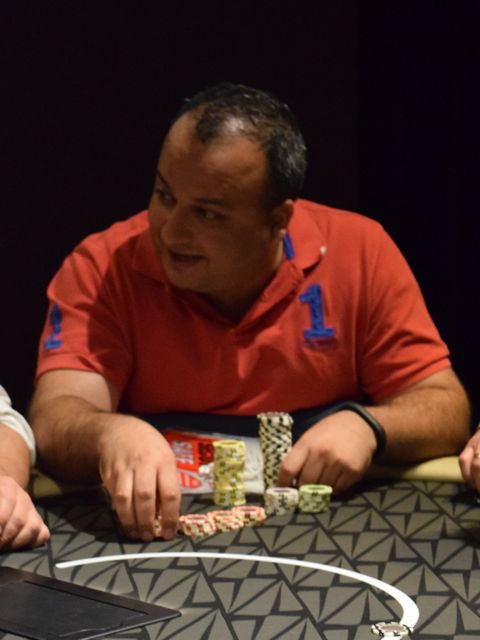 Day 2 will commence tomorrow, Sunday August 10, at 12.30pm where both Day 1 flights will combine for a field of X players (subject to final counts). It is very unlikely that play will reach a final table tomorrow but we will provide exact updates about level expectations when they become available.

Stay tuned to PokerMedia where we’ll be bringing you all the details from the Star Poker room.

Tony Hachem doubles with a bit of lady luck

We pick up action on the flop with the board Jd-4d-3s and Tony all-in for 33,600 after David Tam had led out the betting for 10,000. Tam agonised over making the call but felt he couldn’t lay his hand down and would eventually make the call. Hachem tabled Q-Q to Tam’s A-J. Upon the cards being shown Grant Levy threw in a cheeky “unlucky Hach,” before a Q dropped on the turn. That left Tam drawing to a 10 to complete a straight. The 7d on the river was no help to Tam so Tony doubles to over 70,000 in chips.

Trevor Marmalade has hit the rail after running his sixes into aces. After some action leading to a flop of 3-4-3, Marmalade went all-in for his remaining 9,000 and got the call. The cards didn’t help Marmalade as the turn came 3, the river a 9.

First out is a Banana!

These boys just love competition. Rory Young, Shivan Abdine, Luke Spano and Trevor Saunders have agreed that whoever busts out first will have to wear a banana suit during the ANZPT Melbourne Main Event (let’s hope security in Melbourne is more relaxed than here in Sydney). According to Rory Young, “Trevor had both feet and an arm already in the suit earlier before spiking a 9 on the river to stay alive.” The battle between these guys still rages on. 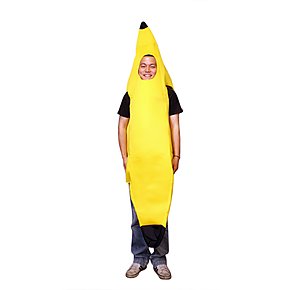 Play suspended for a moment

A large congregation of players have gathered around table 7 to see what has caused play to be paused for a moment. Apparently the dealer didn’t hear a raise made by Trevor Marmalade and hence scooped in bets to the pot prematurely. The hand had to be reconstructed with the raise to stand. All players folded and Marmalade won the hand. He has 15,000 in chips.

Final level of the day

Blinds are up with players facing 400/800 with an ante of 75. This is the last level of play tonight. Currently 84 players remain of the 125 that started play.

With the most recent table closures Luke Spano finds himself seated next to his father Robert. As mentioned earlier, Robert has been leading the banter in this area of the room. What will he make of things with his son seated to his immediate right? We did ask Robert about his thoughts on Luke’s pretty nails and he stated, “he’s not my son!” Spano Senior has 27,000 chips while Spano Junior has 34,000. 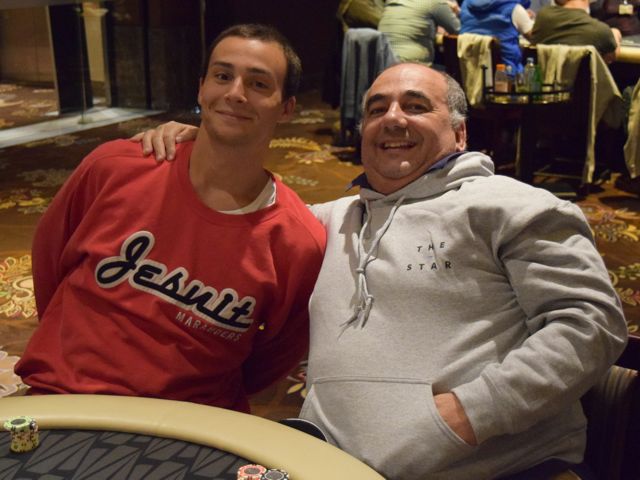 Lucas Byrns (pictured) has been in the leading pack much of the day but he’s now overtaken Dan Neilson to take the chip lead. The top four stacks at the start of level 7 are: 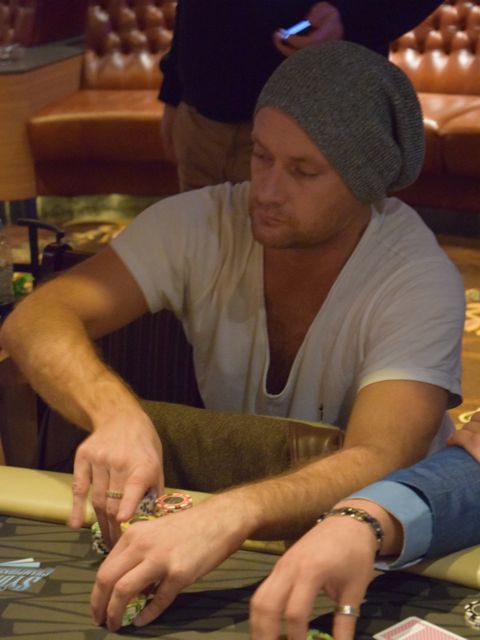 Play has resumed. We’re now beginning level 7 where blinds are 300/600 with an ante of 50. 92 players remain from the 125 that entered today. Yesterday’s flight 1 had 85 left at the same time and finished dropping 26 players in the last two levels to qualify 59 through to Day 2. Will it be a similar story today?

Paul Tartak (pictured) along with Robert Spano have kept table 6 and other surrounding tables entertained all day with plenty of banter back and forth. Apparently it’s been hard work and now Tartak is in need of a massage. He’s taking full advantage of the Best Hands Massage service available to players throughout the entire Main Event. 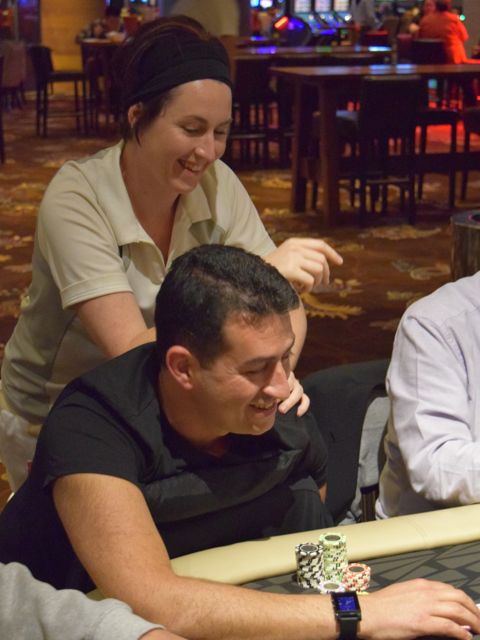 Live reporting for this event is proudly brought to you by PokerMedia Australia partners The Inside Word who provide detailed sports betting analysis, and insightful, independent commentary about local and international sports. Check ’em out!

With the latest in table breaks we’ve now got a table that includes a little poker experience! (In no particular order) it seats multiple ANZPT player of the year winner Tony Hachem, 2007 APPT Sydney and 2012 APPT Seoul winner Grant Levy (pictured), Sydney Champs ME winner 2011 Errolyn Strang and 2009 ANZPT Sydney and 2010 Sydney Champs High Roller winner Daniel Neilson. Good luck to the other players on that table! 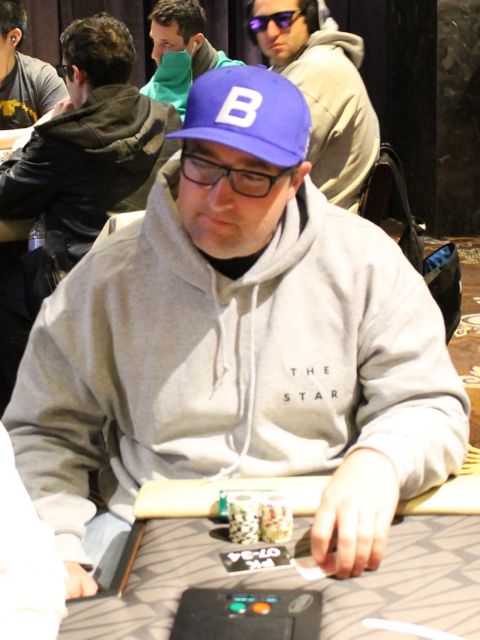 Trevor on the tear, well not quite yet

You may be fooled to expect that legendary TV personality, comedian, long-time AFL Footy Show and Hey Hey It’s Saturday favourite Trevor Marmalade is not too good at poker. However, you may be interested to learn that he actually played in this year’s WSOP Main Event and cashed! He finished in 651st place out of 6,683 entries for US$18,406. He’s in the Main Event here today and currently sits on 24,000 chips as we head into level 6. 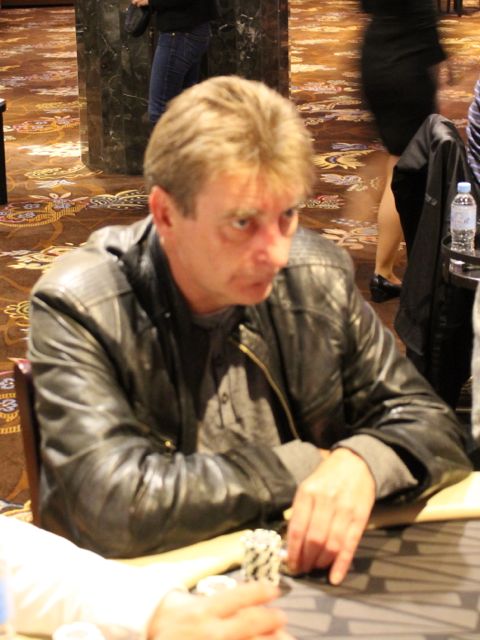 In an earlier post we showed Shivan Abdine (pictured again) in his onesie outfit! After his brush with Star security he was made to change into more appropriate attire in the first break. We understand that the issue was because it was a one-piece outfit. Threats to cut the onesie in two didn’t impress the security who stood firm for the change in clothes. Poker is no fun! 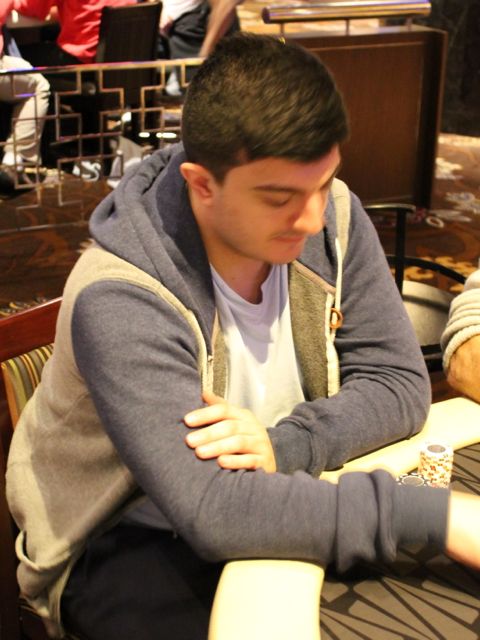 Players have returned from their break to face level 5 where blinds are 150/300 and an ante of 25. The chip leaders and a number of notables at the start of the level are:

Registrations to close at the end of the break

Players are now on a 30-minute break. 110 players remain of the 125 who entered today. Registration is actually still open until the end of the break. At that time we’ll aim to bring you the total prize pool and payouts when they become available.

We pick up action on table 4 with the flop Kc-Qd-10c and roughly 6,000 in the pot. Alex Falon is UTG and opens for 5,000. Yalcin Kaya on his immediate left calls with Joe Hachem folding in the cut-off to leave the pair to battle it out.

The turn falls 9d. Falon takes his time before firing out 7,000, sending Kaya into the tank. Eventually Kaya announces all-in. Falon asks for a count, realising this call could cost him his tournament life with Kaya having him covered.

Falon deliberates briefly before calling and tabling K-K. Kaya shows J-J. After flopping a set, Falon would need a King or the board to repeat after Kaya turned the straight. BINK! The King of hearts was Falon’s saviour, keeping him alive and doubling him up! Kaya is going to have to grind his way back after losing all but roughly 7,000. 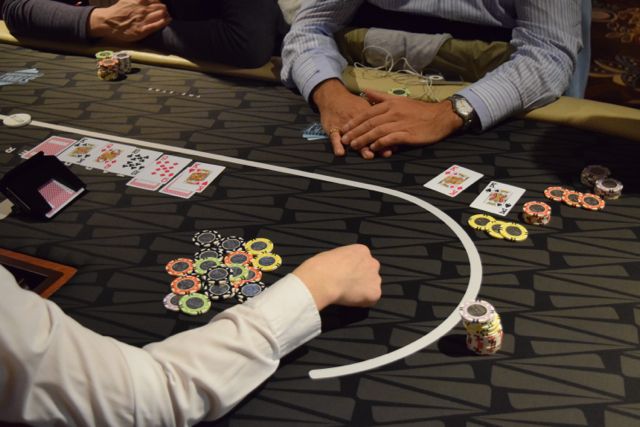 The poker room is in uproar about what program should be shown on television. Tony Hachem had asked staff to have his beloved Blues be shown in their AFL clash with the Gold Coast Suns. To constant jeering from the crowd of unhappy Sydneysiders, they plot to get the horse racing back on. The Sydneysiders win, horse racing it is.

Joe and Tony Hachem (pictured) have recently taken their seats in the Sydney Champs Main Event. And it was Tony who wasted no time picking up a pot shortly after sitting down. Firing 5,200 on the river into a pot just shy of 8,000 with the board showing 5d-As-Ks-4s-9s, the bet ended up being enough to take down the pot and make up for lost time after entering late. 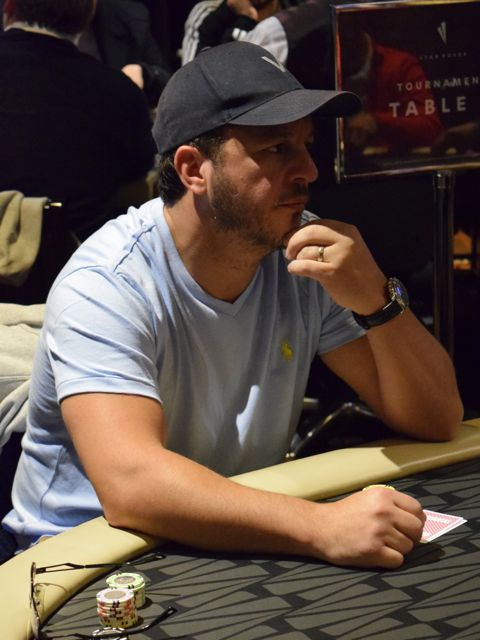 Play is continuing through level three with a total of 123 players having registered for the Main Event today. Therefore, total entries currently sit at 234, having beaten the number for last year’s event.

Awerbuch sends player to the rail

We caught the action on the turn with the board 6-4-J-2. After several raises and re-raises Chad Awerbuch eventually went all-in and was called by his opponent who turn over J-J. His heart sank to the floor as Awerbuch turned over 5-3 for his made straight. The river card made no difference, sending the player to the rail and pushing Awerbuch up over 60,000 in chips.

Big stacks a bit of a surprise

Several stacks have already built steadily beyond the 50,000 mark yet only one bust has occurred to date. At the end of level 2 the chip leaders were:

Players on a break

Players are now on their first break of the day, a 10-minute breather. After the break players will be faced with level 3 where the blinds will be 100/200.

Like to have a punt? PokerMedia Australia partners The Inside Word provide detailed sports betting analysis, insightful and independent commentary about local and international sports, and membership benefits for the sports enthusiast who has an interest in betting. Access to all information is currently free. But this won’t last! Find out what’s hot in sports betting while you can and be first to receive free membership offers by liking their facebook page.

In another likely prop bet, Luke Spano (pictured) has showed off his beautiful nails to the camera. He’ll be hoping to use them to scratch and claw his way through the field to make it to Day 2. 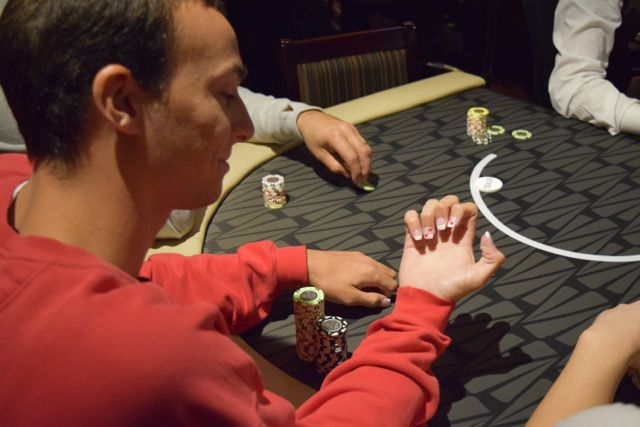 Notables in the field

Blinds are up as players are into the second level of play. Blinds are now 75/100. Currently 114 players have entered today with no busts to date.

Did you lose a bet Shivan?

Shivan Abdine (pictured) has come dressed in a onesie! We wondered if he’d lost a bet or simply felt more comfortable in such dress. While it created some laughter throughout the poker room, no-one was expecting the commotion that would ensue. A group of six security staff gathered nearby discussing their clear issues with his attire. Star Poker staff were then spoken to and Abdine has been remonstrating with security for the past ten minutes. It’s currently unclear whether he will be forced to leave and return in more appropriate clothing. Oh dear! 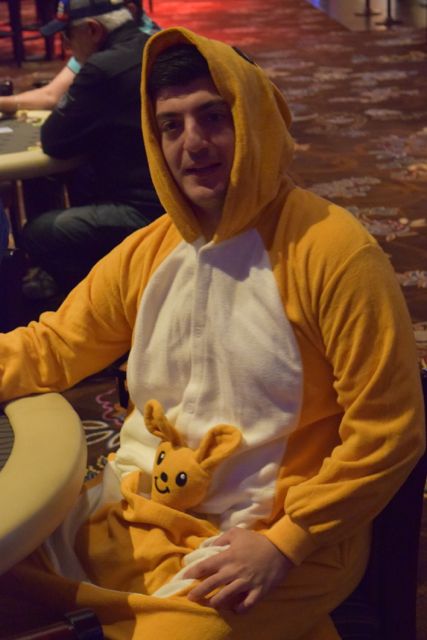 Hoping for a big day

With 111 runners in flight 1 of the Main Event yesterday, organisers are hoping for a big field today for flight 2 to hopefully reach a grand total of 250 runners to create a $700,000 prize pool. The Main Event in 2013 attracted 227 runners so we’re at least on track to reaching that number with 109 registered today so far. Registration will remain open until the start of level 5 which will be approximately 5pm today. 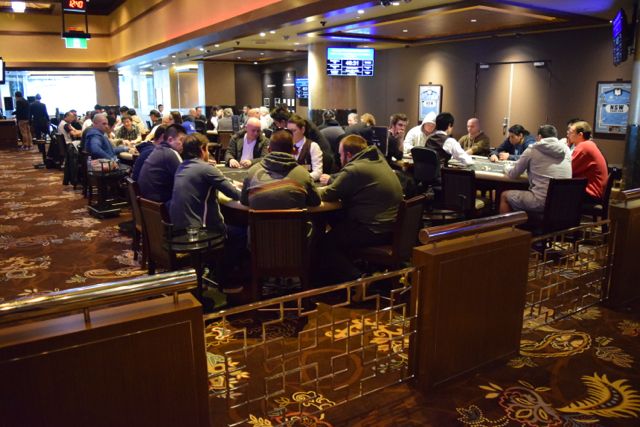 Welcome to PokerMedia Australia’s coverage of the 2013 Sydney Poker Championships Main Event, live from The Star in Sydney. Today is the second flight of Day 1.

Levels are scheduled to run 60 minutes and 8 levels will be played today.

Last year’s winner was Daniel Laidlaw who joined previous champions Errolyn Strang who won in 2011 and Dean Yuen, winner in 2012. Follow our coverage over the next three days as play continues towards crowning another Sydney Champs Main Event champion.

5.00am: Tristan Bain wins APT Sydney main event ($281,685) It took a 15-hour day and a final table that lasted the best part of eight hours but Tristan Bain has managed to grind it out […]

Fit for a king: A new beginning for Sydney’s Poker Palace

Regarded as the very first standalone poker room established outside the confines of an Australian casino, the Poker Palace has remained an icon on our poker landscape since its doors first opened at Club Marconi […]