Zhong chips up to take the lead

The 2014 Sydney Championships Main Event Day 1 Flight 1 is now complete. 111 players began the day and 62 remain (subject to final counts), who now qualify for Day 2 on Sunday August 10. Michael Kanaan, Josh Barrett and Sam Higgs had chips most of the day but it was Danny Zhong (pictured) who chipped up later in the day to end with the chip lead. 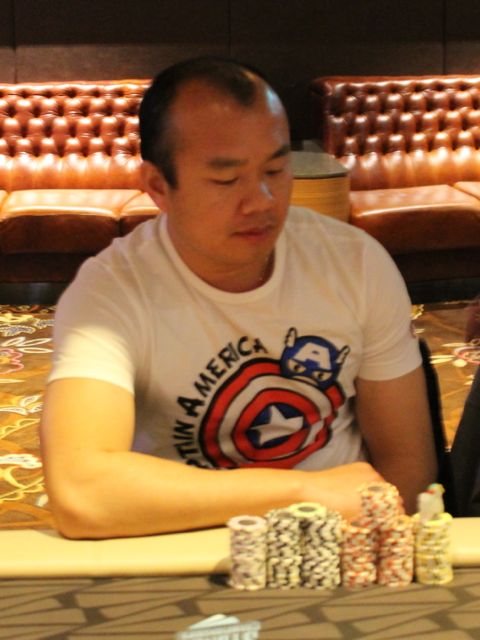 The top five chips counts are (subject to final counts):

Day 1 Flight 2 will commence tomorrow, Saturday August 9, at 12.30pm where another 8 levels will be played. Stay tuned to PokerMedia where we’ll be bringing you all the details from the Star Poker room.

Live reporting for this event is proudly brought to you by PokerMedia Australia partners The Inside Word who provide detailed sports betting analysis, and insightful, independent commentary about local and international sports. Check them out!

Unfortunately for a number of players the Main Event dream has already ended for them this year. 64 players remain midway through level 8 but notables Tyron Krost and Aaron Benton have busted recently this level.

Final level of the day

Blinds are up with players facing 400/800 with an ante of 75. This is the last level of play tonight. Currently 73 players remain of the 111 that started play.

Phil Willcocks (pictured) has been busted largely due to a hand involving Josh Barrett. Barrett lead out UTG and received four callers. After a flop of A-7-8, betting saw Barrett and button player Willcocks remain to the river. The turn was a blank but the river came J. Barrett lead out for 15,000, Willcocks made it 51,000 and Barrett called. Barrett showed his made straight 9d-10d to Willcocks’ AJ to win the hand and cripple Willcocks, who was railed soon after. Barrett shoots back up the leader board with 125,000 in chips. 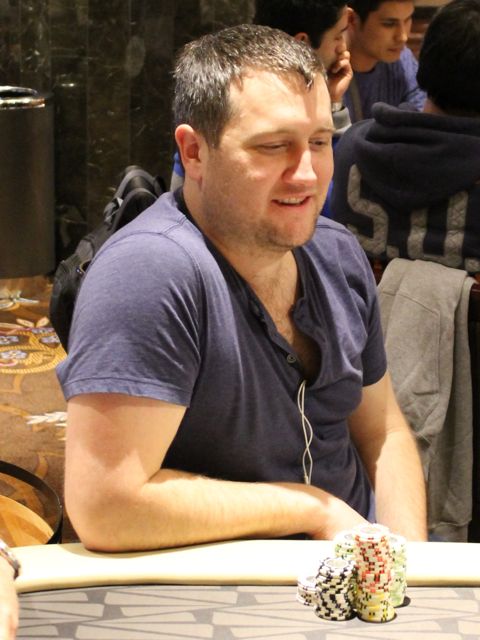 The PLO re-entry ($550) final table has reached its climax with Trung ‘Max’ Trinh triumphing over Nick Lamport.
The final results were as follows:

Greg Cook is the current chip leader early in level 7 but don’t tell him that. He says he never likes counts his chips. The top five are as follows:

Play has resumed. We’re now beginning level 7 where blinds are 300/600 with an ante of 50. It’s also been confirmed that play will stop after level 8 has been completed tonight.

Currently there are 85 players left as we approach the end of level 6. Play is expected to continue for another two levels. Those that have hit the rail to date include Michael O’grady, ‘Toothpick’ Tony Kambouroglou and Peco ‘The Magician’ Stojanovski.

2010 Aussie Millions champ Tyron Krost (pictured) has had his tournament life on the line at the hands of John Caridad. On a flop of Qc-10c-3s, Krost was all-in for his final 8,000. Caridad, also short stacked, decided to lay it down for both players to remain alive to fight another day. 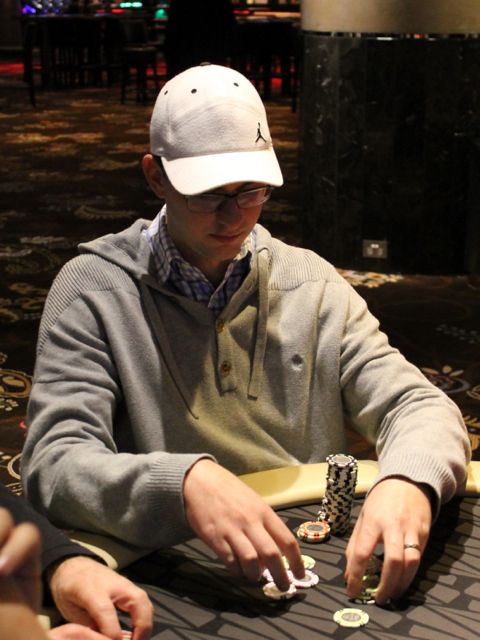 A number of chip stacks are now heading towards the 100,000 mark and the aggression has certainly become more apparent. One of the tougher tables includes Australian Poker Hall of Famers Gary Benson and Leo Boxell, seated opposite each other, as well as ‘Mick’ Morgens Hansen, Sam Capra and Toan Nguyen. In a recent hand Benson was able to chip up through Boxell after his pocket aces made a set on the flop and a full house on the river. Boxell has dropped back to 65,000 while Benson has 66,000.

Players are back, bring on Level 5

Players have returned from their break to face level 5 where blinds are 150/300 with an ante of 25.
The chip leaders at the start of the level are: 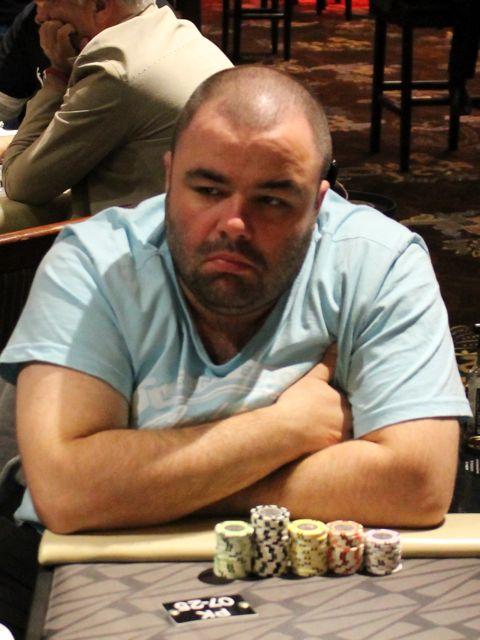 Registrations to close at the end of the break

Players are now on a 30-minute break. 95 players remain of the 110 who entered today. Registration is actually still open until the end of the break.

The PLO re-entry ($550) final table began recently. The seating chart and chip counts going into the final table were as follows:

Top 3 in the room

Chip leaders midway through level 4 with 96 remaining are: 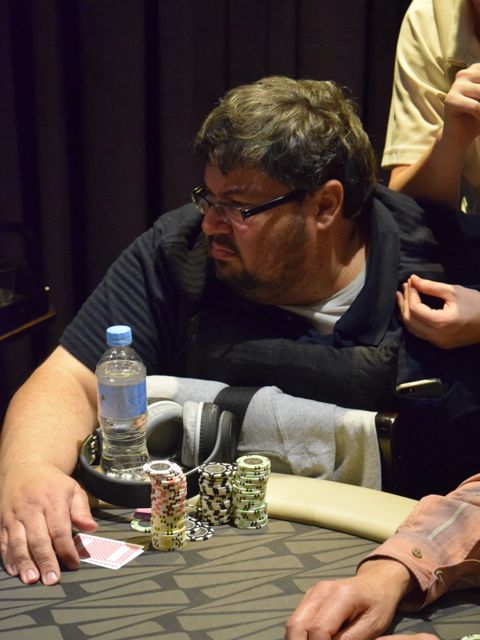 As we pick up the action with three players on the turn and the pot at roughly 13,000, action is on Peter Dykes after Roman Kristek checks from the small blind. The board comes 6c-2c-Jd-9c as Dykes leads out with a bet of 5,100. Nathan Sawyers in the hijack calls after a short deliberation with action back on Kristek in the small blind. Kristek assesses the situation before pushing all-in for 14,750.

Dykes then goes into the tank for several minutes, requiring 9,650 more to make the call that would leave him with just over 2,000 in chips. Dykes does eventually make the call handing it over to Sawyers to act.

Sawyers has both players covered but makes way for the two to showdown. Much to Dykes dismay, Kristek reveals Ac-5c which is too good for Dykes’ Jc-10c leaving him drawing dead.

Have confidence, aces are good!

A collective groan has caught our attention over at table 1. After further investigation it turns out that groan was well deserved. We arrived to find a board of 5-8-9-A-8 with exposed hands of 7h-6h v As-Ad. Apparently players had eventually got their stacks in the middle on the flop with the A-A hitting running cards to best the straight with a minor miracle full house! Yes, the winning player preferred to remain anonymous.

Tenth place finisher in the PMA 6-handed event earlier this week, Tszhin Ng (pictured), is battling his table to stay alive with his short stack. He was recently all-in pre-flop when he was called, tabling A-10 v his opponent’s 9-9.  Thankfully for him the board ran out 10-A-5-K-J to keep his preserve his tournament life for now. Soon after he was all-in again for his remaining 6,000 chips but he wasn’t called this time, stayin’ alive. 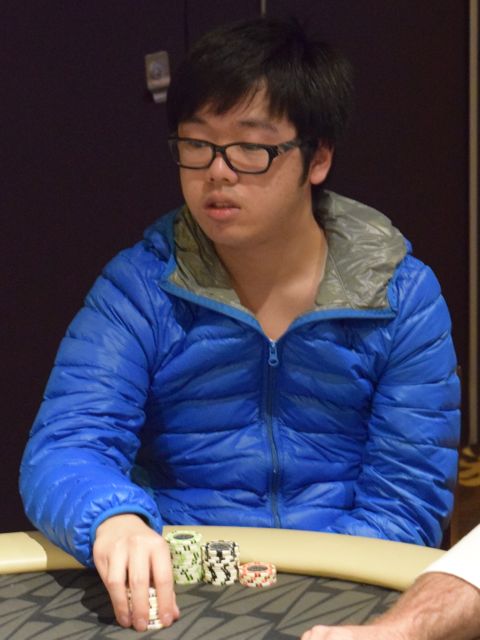 Something’s in the air

After a previous post where we stated that the chips were in the air, esteemed poker player Grant Levy kindly suggested that it was a strange place for the chips. We had to agree, although we do contend that with the dealing style here in Sydney the cards are not quite in the air either. Either way, players are back from their break and into level 3. Current chip leaders are:

Players on a break

Players are now on their first break of the day, a 10-minute breather. After the break players will be faced with level 3 where the blinds will be 100/200.

We were able to pick up the action on the river after a player announced all- in. With a board of 5c 7c 2d 10d Jd Josh Barrett (pictured) had fired 5,000 into a pot of roughly 17,000. This prompted Michael Sorbara to push all-in for 21,975 after checking the action to Barrett.

Barrett took his time to evaluate the situation, eventually making the call with his QQ. Sorbara tabled 88 which wasn’t good enough, sending him to the rail, leaving Barrett to scoop a huge pot and climb up to 66,000 in chips. Barrett, who discussed the play afterwards, was pretty pleased with his call having read his opponents’ physical tells correctly. 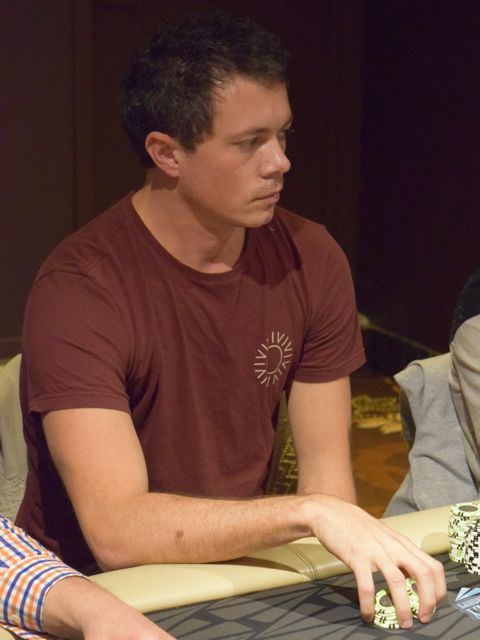 Like to have a punt? PokerMedia Australia partners The Inside Word provide detailed sports betting analysis, insightful and independent commentary about local and international sports, and membership benefits for the sports enthusiast who has an interest in betting. Access to all information is currently free. But this won’t last! Find out what’s hot in sports betting while you can and be first to receive free membership offers by liking their facebook page.

Entries have climbed to 110 but it’s currently all a bit quiet here during the early levels with players seemingly content to keep the pots small while still deep-stacked.

First level all over

Who’s in the field today? 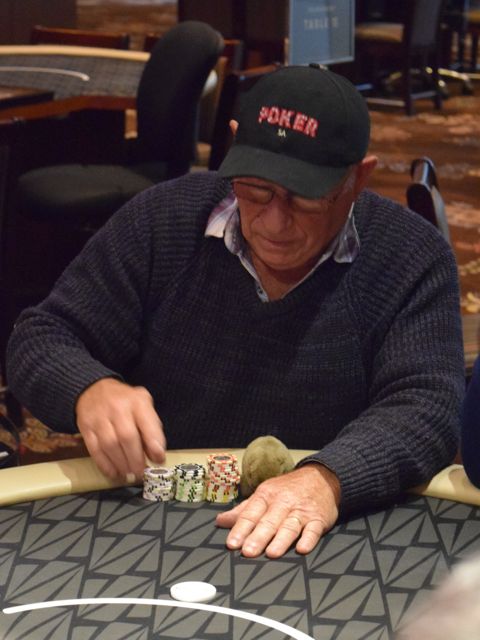 Within the first half hour of play we’ve had an all-in call and a player bust from table 7. The player in question had apparently been VERY active in hands to date and eventually ran out of luck (and chips) when he was all-in with 44 against QQ. With the chip stacks having risen to 30,000 this year Michael O’grady’s comment was fitting, “imagine how long he would have lasted if he only had 20,000 in chips!”

We’re already being entertained. Peco ‘The Magician’ Stojanovski (pictured) made a $50 note disappear into his fist and then miraculously brought it back again. How does he do it? He’ll be hoping to create some magic today at the table in the Main Event. 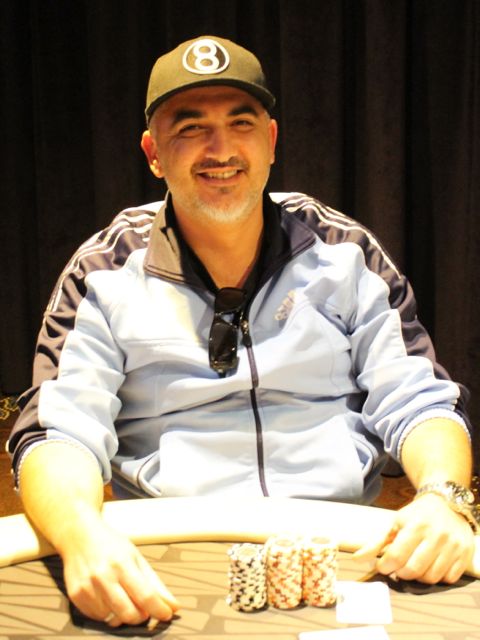 Welcome to PokerMedia Australia’s coverage of the 2013 Sydney Poker Championships Main Event, live from The Star in Sydney.

Levels are scheduled to run 60 minutes and we’re expecting a minimum of 8 levels will be played today. There is one other day one flight scheduled, which will start at 12.30pm tomorrow (Saturday August 9).

Last year’s winner was Daniel Laidlaw who joined previous champions Errolyn Strang who won in 2011 and Dean Yuen, winner in 2012. Follow our coverage over the next four days as play continues towards crowning another Sydney Champs Main Event champion.

Thanks to our live reporting partners The Inside Word

Live reporting for this event is proudly brought to you by PokerMedia Australia partners The Inside Word.

12am: End of pl That’s a wrap here at The Star on Day 2 of the ANZPT Sydney main event. After 10 long hours of play, we head now wait until tomorrow to crown a […]

9:35pm: Bilby hops into Flight 2 lead Flight 2 of this year’s Sydney Championships is done and dusted with Thomas Bilby (pictured below) our chip leader after the day’s play with 118,525 – just ahead […]