Rory Young (pictured) has been crowned champion of the 2014 Sydney Championships PMA NLH 6-handed event. Throughout the tournament it was obvious that he was playing with confidence and built his stack early on. At the final table he got below 200,000 with six players left but stacks were still reasonably even then so he was never in significant trouble. As play progressed he watched as Ngyuen and Kambouroglou passed chips between each other. He always remained in contention, making his move against Kambouroglou to knock him out and take over the chip lead going into head’s up. Aka Victor Teng for a moment when he was playing a game of deception about his identity early in the tournament, the real Rory Young triumphed with pocket tens on the final hand and walks away with a much deserved title and over $30,000. 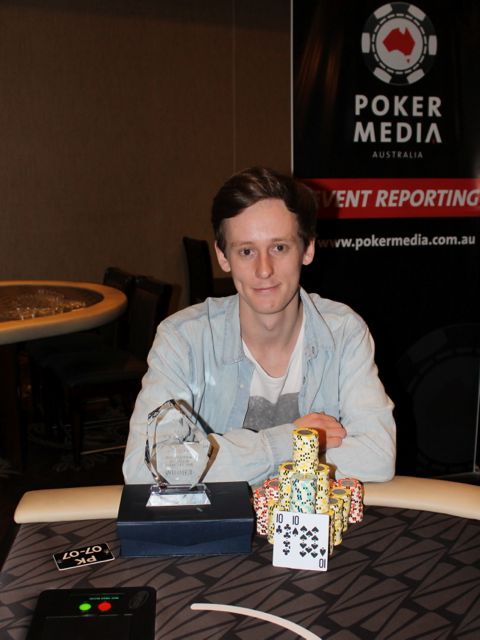 Once a deal had been made both players lost their inhibitions. It looked like they were happy for the tournament to be over. And it was…early in level 24 Minh Nguyen (pictured) went all-in and was snap called by Rory Young. Young was full of confidence when he tabled 10s10c against Nguyen’s Ad5d. The board fell Jc Qs 7h 8s 4s to knock Nguyen out in 2nd place. 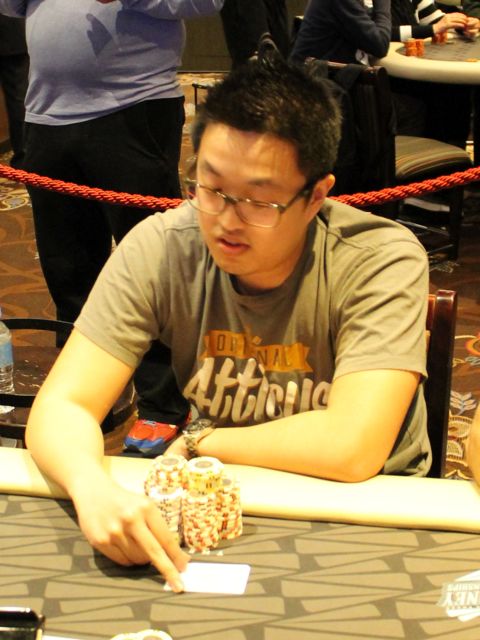 Is a deal on the table?

Players are discussing a likely deal. Rory Young has 1.05m in chips and Minh Nguyen 750,000. And we believe it has been agreed that the money split will be taken care of but they’ll be playing for the title and trophy.

Rory Young raised on the button to 50,000, Tony Kambouroglou (pictured) went all-in for his remaining 400,000, Minh Nguyen folded and Young called. Young tabled AJ to Tony’s Q7. The board ran out K K 3 10 A to seal Tony’s fate in 3rd place. 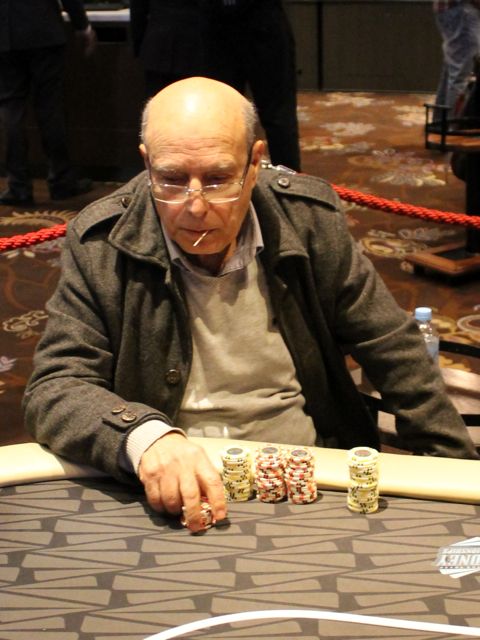 Just can’t put the youngsters away

Toothpick Tony’s stack has been going south ever since he cracked the million mark. In a hand again with Minh Nguyen both players called and min-raised to the turn with the cards showing Qd 4s 4c Kh. Nguyen then made it 64,000, Tony called and the river came 3d. Tony checked prior to the card even hitting the table, Nguyen made it another 117,000 and Tony called. Tony turned over pockets jacks and when he saw Nguyen turn over 42 he was not happy having been slow played! Chip counts are now:

We are now at level 23 where blinds are 12000/24000 with an ante of 2000. Toothpick Tony is well ahead of his two oppenents although he doubled Minh Nguyen back up in the first hand of the level.

We enjoy a good race

While most of level 22 has seen folding and the shuffling of chips around the table, late in the level Toothpick Tony min-raised to 50,000 when Minh Nguyen went all-in over the top. Tony considered things as he does, before making the call, tabling 4c4d. Nguyen tabled KdQc and we saw the board run out 10c 7c Ah 9s 8h to provide no luck to Nguyen and send Tony northward with his stack. Tony has now cracked the million mark with 1.12m in chips while Nguyen drops to 350,000. Rory Young has 325,000.

Rory Young raised to 50,000, David Tam (pictured) to his immediate left moved all-in for 247,000, Toothpick Tony then started his antics. He wasn’t sure how to play this (so he was portraying) but eventually went all-in himself! Rory got out of the way as Tony tabled AdAc v Tam’s 6d6h. The board provided Tam with some outs but Tony’s aces held as the board ran out 7s 5h Qh 9s 9c to send send Tam to the rail. 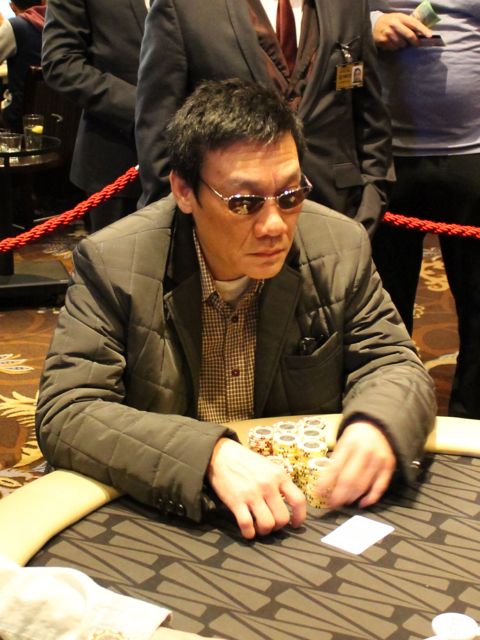 Players have returned from their break and have now reached level 22 and will be faced with blinds of 10000/20000 with an ante of 2000. Four players remain with Minh Nguyen chip leader.

Minh Nguyen started proceedings by raising 50,000 and Toothpick Tony called to see a flop of 6c 5h Ac. Tony checked, Nguyen raised another 50,000 and after some consideration and table gesturing, Tony moved all-in over the top for another 260,000. Nguyen went into the tank for a while before laying down his hand. 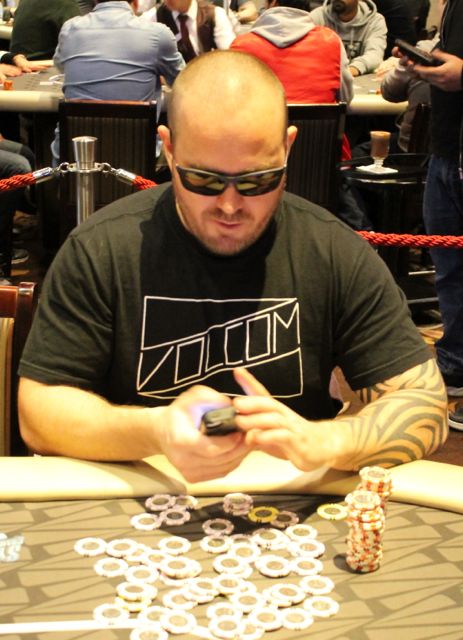 Adrian Salter (pictured) had been picking his moments throughout the final table and he found another spot in this hand. The fireworks started when Rory Young went all-in for 215,000 and Salter called. Young tabled KK to Salter’s A10. Young looked the favourite but as the board ran out, the crowd yelled and screamed as they saw the board fall K K 10 10 5 to send Salter to the rail. 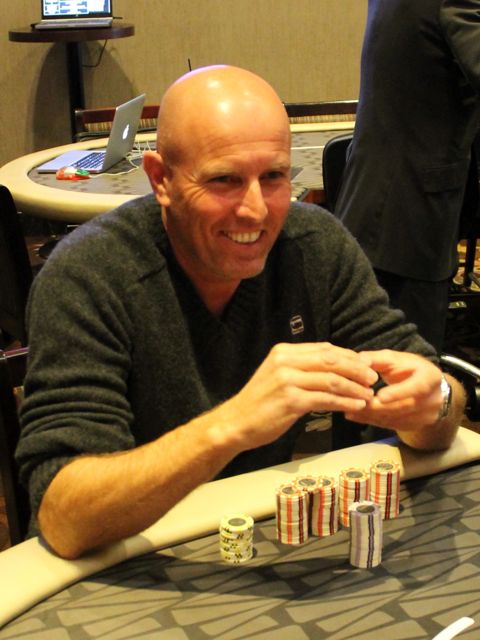 In pre-flop action, Minh Nguyen raised to 100,000. All players got out of the way except for Tom Rafferty (pictured) who went into the tank. He sat with 120,000 so a call (or re-raise) would put his tournament life on the line. After some time he decided to go all-in and was called by Nguyen. Nguyen tabled 10hJd to Rafferty’s Ac5c. The board provided some hope for both players as it came 7h 6d 10s 5s 6c but it would favour Nguyen to send Rafferty to the rail. 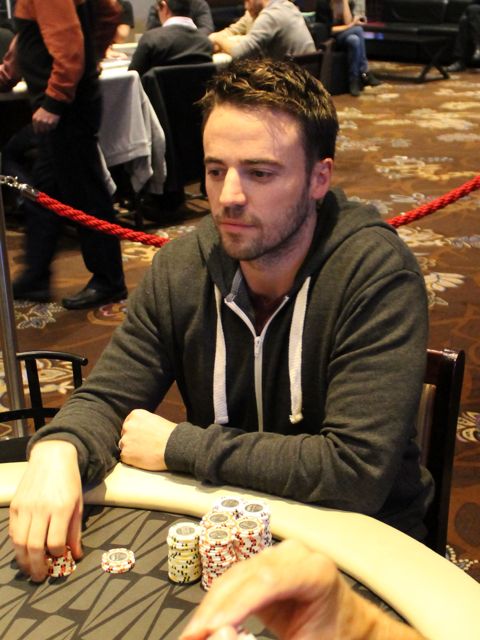 Minh Nguyen has been shoving whenever possible and this time the target was Rory Young. In pre-flop action, Young raised, Nguyen re-raised all-in and Young called. Nguyen tabled 55 and Young K10. The board wouldn’t help Young as it came 9 6 3 7 2 to chip Nguyen up to almost 300,000.

Chip counts as we approach the end of level 19:

What are players playing for?

The payouts are as follows for the final seven players at the final table:

David Tam has taken the opportunity with his big stack to call Aaron Benton who committed his remaining 42,500 in chips to the pot to be all-in. Tam considered the relatively small amount and quickly called to put Benton at risk. Benton turned over KsKh v Tam’s Kc9c. The board ran out 4d 5h 8s 8d Ad to keep Benton’s hope for another title alive.

Minh Nguyen has already put his tournament life on the line. After some pre-flop action, Nguyen went all-in for his remaining chips. It was over to David Tam who had to make the decision. He had Nguyen well covered with another 172,000 to be committed if he called. He made his calculations and decided to fold. Nguyen stays alive.

Cards are in the air

Play has started at 4pm sharp here in the Star Poker room for the PMA NLH 6-handed event. Last night play had continued into part of level 19 but for the start of play today the clock as been wound back to the start of the level. Blinds are therefore 5000/10000 with an ante of 500.

Welcome to our live reporting coverage from the Star Poker room at The Star in Sydney. Coverage today will focus on the PokerMedia Australia 6-handed NLH event final table scheduled to begin at 4pm.

Seven players remain. The chip counts leading into the final table as follows:

Stay tuned throughout the afternoon and evening for all the details. Good luck players.

Thanks to our live reporting partners The Inside Word

Live reporting for this event is proudly brought to you by PokerMedia Australia partners The Inside Word.

2.25am: That’s all folks And that does it for Day 1a of the 2012 Star Summer Series Main Event! With play starting at the unusual time of 6.15pm to accommodate the working crowd and those […]