The 2014 Sydney Poker Championships at The Star began in style last night with a complete sell-out of the Opening Event $330 NLH Repecharge Day 1 Flight 1. 275 players filled the Star Poker room to start the event. By the end of twelve 40-minute levels of play, 46 players remained to qualify for Day 2.

Last year saw records fall over the three Day 1 flights when 914 entered the Opening Event. Reaching or even surpassing this number will depend on Star Poker configurations but given that the event is a repechage, there’s every chance that records will tumble for a consecutive year. One thing is for sure though, a massive field will ensure a prize pool of around $250,000 will be up for grabs. The winner is expected to take home around $50,000.

Two more flights remain in the Opening Event. Flight 2 will begin at 6.15pm tonight. Flight 3 will commence on Friday August 1 at 12.30pm.  Those that qualify from the three Day 1 flights will earn a place in the starting list for Day 2 that will begin on Saturday August 2 at 12.30pm. Play is expected to continue on Day 2 until a final table is reached. Those players who make the final table will return on Sunday August 3 to compete for the crown.

The Main Event buy-in has remained at $3000 for the second year in a row, with the battle for the 2014 Sydney Champs title scheduled to kick-off on Friday August 8. The starting stack for the event has been updated to 30,000 in chips since the announcement of the schedule, so players will have plenty of opportunity to show their poker prowess. 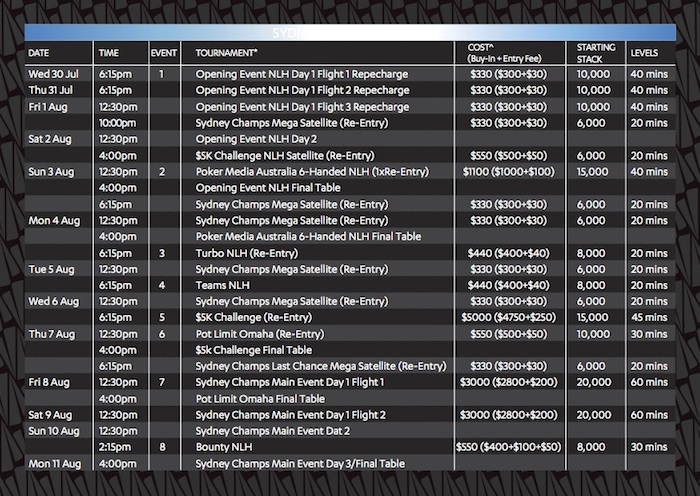 The 2018 APL Million is only weeks away!

The event that saw Wollongong’s Branko Usljebrka come from the clouds with an $11 satellite to walk away with $265,000 in 2017 returns to The Star Sydney’s Poker Room for its second year. Touted as […]

The Final Table has been decided for the latest edition of the PokerMedia Australia $1k Six-handed Special Event as part of the ANZPT Sydney series at The Star. A field of 113 players created a […]