Ben is the bubble boy

Unfortunately for Ben Williams he has finished on the bubble with all remaining players in the money at the ANZPT Sydney Main Event! The bubble took just shy of an hour to burst with Williams having to make his final move with Ad-3c shoving is remaining 12,000 UTG (blinds 2000/4000/500).

Williams would receive some protection from Karl Spiegel who would re-raise to 40,000 forcing all other players out of the hand leaving Williams and Spiegel heads up. It was Ad-3c for Williams while Spiegel showed As-Kc.

The flop fell Ah-2d-Kd meaning Williams needed running cards to save his tournament life. With the turn showing a Qc and a 6h on the river Williams hits the rail. We are now into the final level of the day. Blinds are now 2500/5000 with a 500 ante.

Blinds have ticked into level 14 (1500/3000 with a 500 ante) in the ANZPT Sydney Main Event. A total of 13 players hit the rail in the past hour with the several short stacks eliminated while players with the big stacks are picking their spots carefully as the money bubble approaches. Just 12 more players need to be eliminated until the first player is awarded a payout.

Alex Lee continues to roll on after collecting another short stack. The player to his immediate right decided that the time was right to push his remaining 6800 after everyone folded to him in the small blind. Lee, with his big blind of 2400 already in there, smiled as he throws in his chips to call. After all, it’s pretty easy to call a further 4600 when you have more than 350,000!

It was Qd-7d for the small blind while Lee showed 2s-5s. To underline the sort of run he’s on, the flop came 2d-2c-5c! With a collective laugh from the table after seeing the flop there was a glimmer of hope with the turn showing a Qh. Unfortunately it wasn’t to be with an Ad on the river as Lee gathered a few more chips to a stack now north of 360,000, which is more than three times the average stack!

Time for a Kit Kat

There are 79 players still seated in the ANZPT Sydney Main Event as we head off on a 30-minute break at the end of the fourth level of the day. There will be a minimum of four more levels played after this break. We will need to lose a minimum of 25 players in those four levels in order for play to cease for the night.

Our top 5 stacks are:

Jazz Mathis makes it 4000 to go from the cutoff and Jesse McKenzie raises to 40000 leaving 10000 behind. Jazz makes the call and doesn’t realise that Jesse is not all in and accidentally exposes the As. The flop falls the Kh-5h-7h and Jesse Mac shoves his remaining 10K. Jazz snaps it off. Jazz tables As-9c but is now behind the Ad-5d of Jesse. The turn is the 4c and the river is the 8s and Jesse doubles up.

Jazz Mathis and Eugene Zanozin have clashed in a big hand. Eugene had just moved tables to join Jazz at his table and he opens with a raise to be called by Jazz. The flop falls the Jc-6s-7s and Jazz leads for 4000 and is called by Eugene. The turn is the Jh and Jazz leads for 12000 and is raised by Eugene to 26000. Jazz tanks for a small amount of time and makes the call.

The river is the 4d and Jazz leads for 25000. Eugene smoothly announces all-in and Jazz snap calls! Jazz is holding 7x-7x for the full boat and Eugene is holding Ah-Jh for trip jacks. Jazz scoops the pot, eliminates Eugene and increases his stack to a mammoth 450,000!

A massive pot was brewing when we get to the table and the action has played out like this. The player in early position opens to 4100 and the next player in turn ships it all in for 35000. Karam Bahi makes the call and action passes to the small blind who shoves for 40,000. The player who opened the action shoved over the top for another 46000 and Karam makes the call having all players covered. Now in case we have lost you there are three players all-in and Karam has called them all.

Mathis back in the lead

We have completed the first two levels and players have taken a quick ten minute break. Here are the top 5 chip counts now:

Everybody is a winner (except the guy with queens)

An interesting hand just played out on table 11 and Josh Barrett was the big winner. After folding his Qx-Qx the hand before he wakes up with Ah-Ad UTG and raises but finds himself facing some heavy action when the player in the small blind raises and is raised again by the big blind. Josh moves all in for 53,400 but the small blind player moves all in for a total of 94,400 and the big blind player moves all in over the top to have them all covered. And we find all players have been dealt a hand!

The flop drops the 3c-3h-2c and the turn is the Tc giving the flush draw to the player in the big blind but the river is the 6s and Josh more than triples up to well over 170000. The player in the Big blind takes down the side pot worth 85000.

Nathan Sawyers commenced day 2 with a stack well under average at 26,000. He now sits on just above average with about 83,000 after we arrive to see a flop of 2s-Qh-As and a pot already worth 30,000. Nathan leads at the pot for 18000 and his opponent asks him how much he is playing behind and Nathan has about 40K behind. His opponent makes the call and the turn is the 5h. Nathan announces all in and his opponent insta mucks. Nathan flashs Ad-Ah for top set. 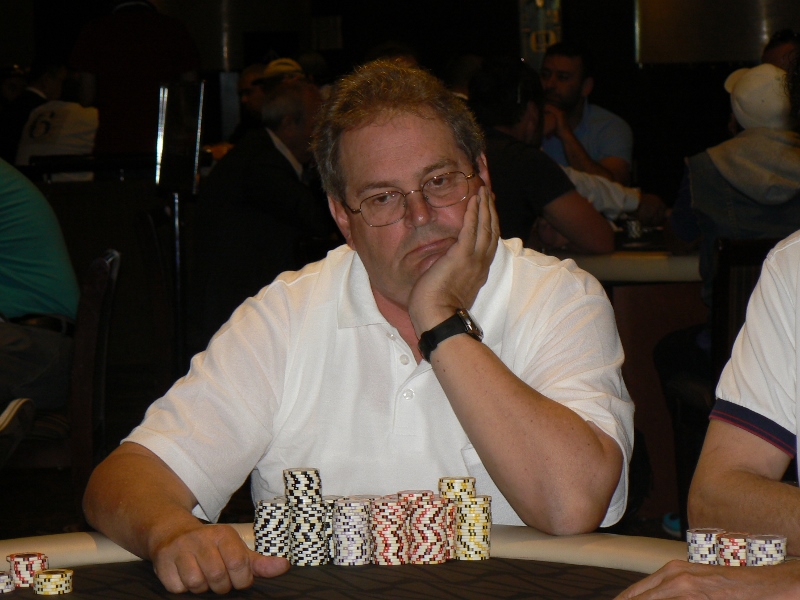 We have a new chip leader

Eugene Zanzino (pictured above) has hit the top of the leader board with a stack of 239000. Jazz Mathis still isn’t very far behind with a stack of 225,000. Michael Pinzone, our chip leader at the end of flight 2, is now over the 200k mark with his stack of 212,000. The break is 20 minutes away and we will supply a more concise top 10 leader board at that time.

We hear a yell of “three all-ins” from table 7 and we see three stacks in the middle and Joe Reina is the man who has everyone else at risk. Joe is holding As-Qh and his opponents hold 8h-9h and Ts-Td. The flop is a winner for Joe as it falls 2c-Ac-9d. Joe needs to dodge any T, 9 or 8 to claim the entire pot and sure enough the turn and river fall the 7d and 4s.  With that Joe eliminates two players and grows his stack to over 120,000.

On a board reading Ac-Tc-4c and with the pot sitting at 8000 Michael Pinzone checks to Brett Chaloub who bets out 3700. Michael raises this to 7400 and we see a four bet from Brett to 16800. Michael tanks but calls and the turn card is the 5s. Pinzone once again checks his option and Brett moves 17200 into the middle. Michael asks how much Brett is playing and then tanks for a couple of minutes before min raising to 34400 but Brett quickly mucks his hand and asks “did you flop it?” Pinzone replies that “you didn’t pay to find out”. Michael claims the pot and adds another 45000 to his stack moving him over the 200000 mark.

Mackenzie takes one down

Jesse Mackenzie re-raises from the small blind to 6600 and the player, who opened the betting in the hijack, makes the call. We go to a flop of Qc-9c-5c and Jesse takes a peek at his cards before leading out for 5600. His opponent immediately raises to 16000 and Jesse moves his remaining stack all in. His opponent quickly folds and Jesse scoops up an additional 25000 in chips with that hand.

We pick up the action with the board reading 5d-6h-7c-7s with the pot sitting at around 13,000. Eugene calls his opponent’s bet of 6500 and we proceed to the river of the Qc. Eugene is then faced with a bet of 35,000 from his opponent, with his sack at 15200 this is a call for his tournament life. After tanking for a couple of minutes he makes the call and his opponent tables 5c-5s for a fullhouse. Eugene mucks his hand and quietly walks away from the table.

Ross Johnson from Ireland has been eliminated at the hands of Jacques Ramsden. Action folds to the player on the button who raises to 2400 and Ross immediately moves all in and almost as fast Jacques moves all in over the top. The button quickly gets out of the way and Ross tables 4d-4s and finds himself a 4 -1 underdog to Jacques Qh-Qd. The board runs out 8d-3d-6s-Kc-Jd and Ross heads to the rail.

A chip and a chair

Jay Smith raises all in from the cutoff for 14,200 and finds a call from Michael Addamo in the big blind. Michael tables Tc-9c and Jay is in front with the Ad-Kd. The board is quickly run out to reveal Qs-5h-3h-3c-Jd and Michael doubles up whilst Jay is left with 200 in chips.

Karim Jomeen is the unfortunate player to have the privilege of being the first player eliminated today. Kaz moved all in with Kc-9c and was called and dominated by Ad-Ks. The board bricked out completely for Karim and he quickly leaves the tournament area. 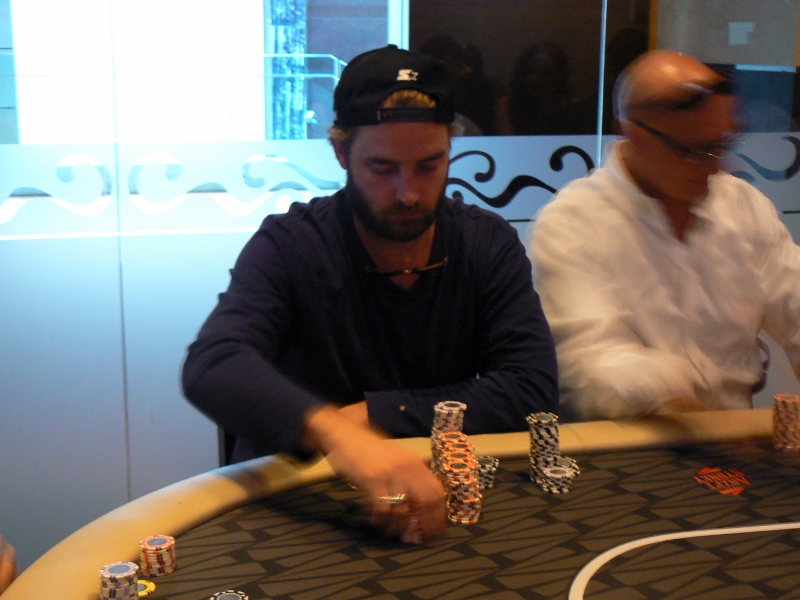 Cards are now in the air! Day 2 has kicked off with minimal fanfare; the 163 players have all take their seats and stacked their chips. Jazz Mathis (pictured above) has set his stack up and takes the lead at the start of play with his 195000 stack. He will be one of the players we watch closely throughout the day after his numerous solid reads and great plays from flight 1. Stay tuned as we progress through the day and report on the ever changing leader board and the big hands we view.

Event reporting brought to you by:

Play will commence at 12.30pm AEDT on Saturday March 21 from The Star, Sydney.