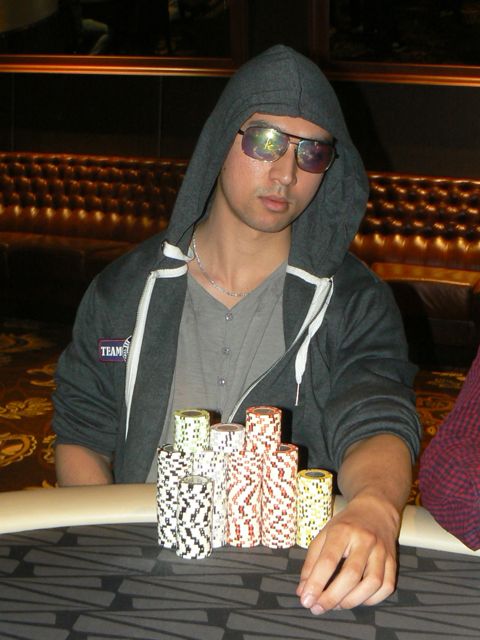 The inaugural APT Sydney event launched with a bang last night as 273 players converged for what is shaping as the biggest main event ever held at The Star. By the end of the night, just 152 of them remained with Ricky Lim (pictured above) leading the way with a whopping 254,300.

With the tournament formerly known as the Star Summer Series linking with both the Asian Poker Tour and the National Poker League, it was a unique mix of local tournament regulars, outright amateurs and full-time pros that took to the tables to do battle.

As always, some crashed and burned early while others shone through with Patrick Healy, Matthew Wakeman, Tristan Bain and Dale Marsland among those well placed heading into Saturday’s Day 2.

The top chip counts at the end of the day’s play are as follows:

We were also informed late in the evening that there are already 293 players confirmed for tomorrow with more likely to register late.

This not only means that we have moved past the $1 million prizepool mark, it also surpasses the 561 players who took part at APPT Sydney in 2007 as the biggest main event field ever assembled at The Star.

It’s been a long night but we’ll be back again at 12:30pm later today (Friday) for the second flight in what promises to be an exciting day in the Star poker room. Make sure you join us here at PokerMedia Australia for all the live action.

The tournament staff has just announced there will two more hands remaining at all tables tonight before the chips are bagged and tagged.

As Healy relayed it to us, Guerin opened in middle position and faced a 3-bet from Healy. He made the call as they saw an A-2-4 flop. Guerin bet out and Healy called. When the turn came a 9, Guerin bet again and Healy jammed.

Guerin went deep into the tank and eventually made the call but was in trouble with A-Q against Healy’s A-K. The river didn’t bring the Queen Guerin needed and he was off to the rail while Healy now has around 175,000 in front.

We’ve just been told some numbers in regards to player figures and it appears APT Sydney will break the record for the biggest main event ever held here at The Star.

The inaugural APPT Sydney back in 2007, which was won by none other than Grant Levy, attracted a field of 561 players but with 273 here today and 293 already confirmed for tomorrow (for a total of 566) we’re about to set a new mark.

This is also means the prize pool will be well over $1 million. Of course, we can expect a number of late registrations tomorrow and we expect the Star poker room will be pushed to its capacity of 340 seated players.

For the record, the official player cap for this event is 700 so if we do indeed have more players than seats we’ll be allowing for 27 alternatives to be fitted in once other players bust. That would mean a whopping prize pool of $1.26 million.

It looks like we’re in for a crazy day tomorrow!

One player in the field today who deserves a mention is 2009 Aussie Millions champion Stewart Scott (pictured above). If you haven’t seen or heard much from him in a while, there is good reason – this is his first live tournament in almost two years!

Having enjoyed a lengthy break, Scott seems fresh and relaxed and has grown his stack to a very respectable 90,000 “without any hard decisions,” he told us.

“I’ve just had a few good sports where people have tried to bluff me on the river and I’ve been sitting there waiting for them with chips in hand.”

We’ve just started out final level of the day with blinds at 400/800 with a 75 ante. There are still 166 players remaining in today’s opening flight!!

1.30am: Eliminations coming thick and fast

With the blinds now at 300/600 with a 50 ante, the pressure is starting to build on the shorter stacks and we’re seeing a lot more action than we did in the early rounds.

Players are on their final 10-minute break of the night.

Peco Stojanovski just explained to us why it’s not a good idea to slow play Queens.

“Want to hear about a sick hand?” the 2010 APPT Sydney final tablist asked.

“It’s not a sick hand because you flatted you idiot,” his mate Paul Tartak – seated at the same table – replied.

As it turned out, a player had opened UTG and Stojanovski called with Queens. The flop came 10-3-3, his opponent held 4-3 and, well, you know the rest. Stojanovski is still alive with around 10,000 but needs some help soon.

The hand began with a player limping for 400 in the cut-off before Dean Yuen bumped it up to 800. Didier Guerin and Levy called in the blinds before the limper re-raised to 1,200. Yuen, Guerin and Levy all called.

The turn was a 3 and Levy again check-called a bet of 2,400. When the river landed a J, Levy checked and his opponent bet 5,000, sending Levy into the tank. While thinking about the decision at hand, Levy was playing with a 5,000 chip in his right hand and accidentally dropped it onto the table where it crossed the line. He grabbed it back immediately and it was clear to all he hadn’t meant to drop it, but the dealer insisted the floor staff had to be called.

They eventually ruled it to be a mistake and that the call would not be enforced. Levy then said “I call anyway” but mucked when his opponent showed K-Q for the rivered straight. 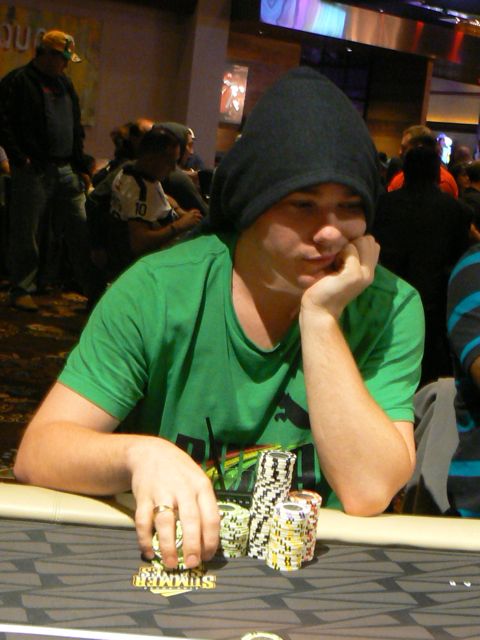 Benton had earlier run trips into a boat, top two into a set and two pair into a straight, and he finally met his demise when he again ran top pair into Bain’s flopped set when short-stacked.

Bain is our tournament chip leader as he moves to almost 130,000.

We currently have four players who have cracked the 100,000 barrier and will already be thinking of a deep run here at APT Sydney.

Our four chip leaders are:

The clock has just ticked over into Level 6 with blinds now at 200/400 with a 50 ante. We’re scheduled to play eight one-hour levels tonight with play to finish just after 3am.

Jonathan Karamalikis (pictured above) is starting to work his way up the chip counts and is up to 50,000 after taking down a handy pot. With blinds at 150/300, a player limped in late position and Karamalikis bumped it up to 1,200 from the button. The small blind came along for the ride and the limper called as well.

Karamalikis thought briefly before raising to7,000. His opponent shook his head in frustration as if he knew what was coming but made the call anyway – only to let out an audible sigh when Karamalikis showed A-10 for the rivered straight.

The 230 remaining players are on a 10-minute break 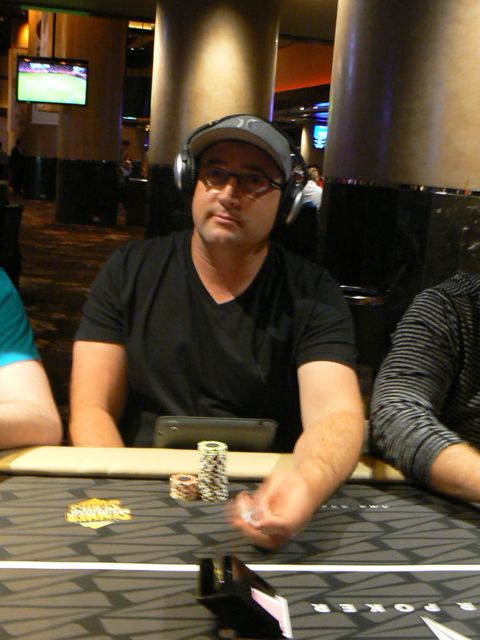 Grant Levy (pictured above) is sitting with just a touch under 20,000 remaining from his 30,000 starting stack, but it’s remarkable he has anything left at all.

Levy recently picked up Kings, raised and was 3-bet by an opponent. Sensing something was up, Levy flat-called the raise then check-called all three streets on a 9-high board as his opponent turned over Aces. As Levy explained, it was one of those spots where he was hoping his opponent held Queens but suspected the worst. 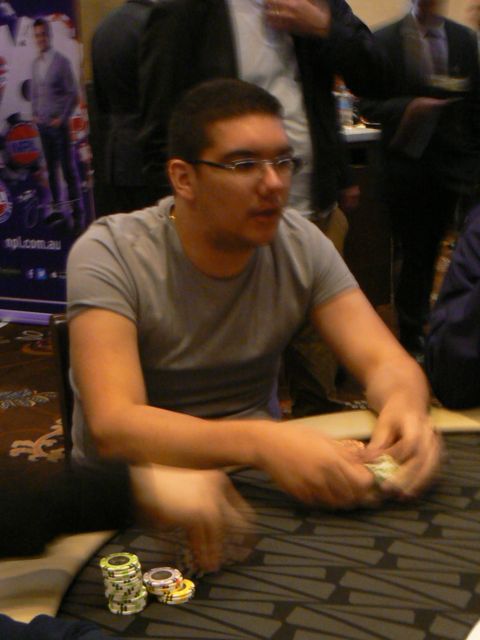 Michael Kanaan (pictured above) has had a tough day at the office so far but he just scored a fortunate and much needed double to at least keep himself alive.

Kanaan was all-in pre-flop for his last 5,000 with K-K but would need help against an opponent’s A-A. The 9-10-J flop gave him some extra outs and the river provided one of them as the Q landed to give him a straight. 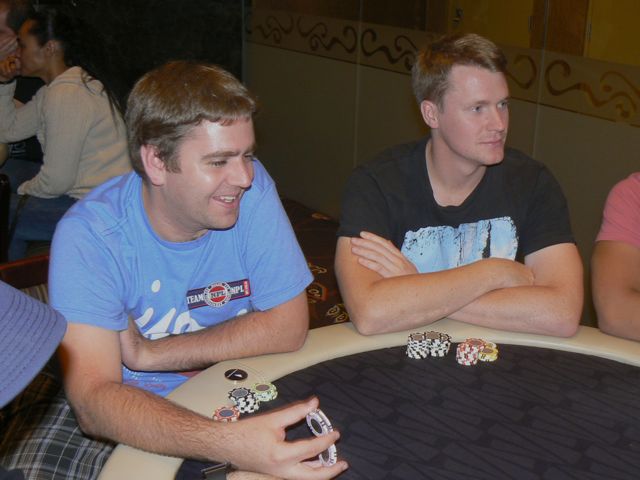 There are a few interesting table draws scattered around the room that should ensure plenty of action. Daniel Neilson and Andy Hinrichsen (pictured above) are seated alongside one another at the far end of the room at the same table as Tam Truong, while closer to our reporting desk Didier Guerin, Grant Levy and Dean Yuen are all seated in a row with Haibo Chu directly across from them.

Another nearby table sees Victor Teng, Peco Stojanovski and Dave Allan together. 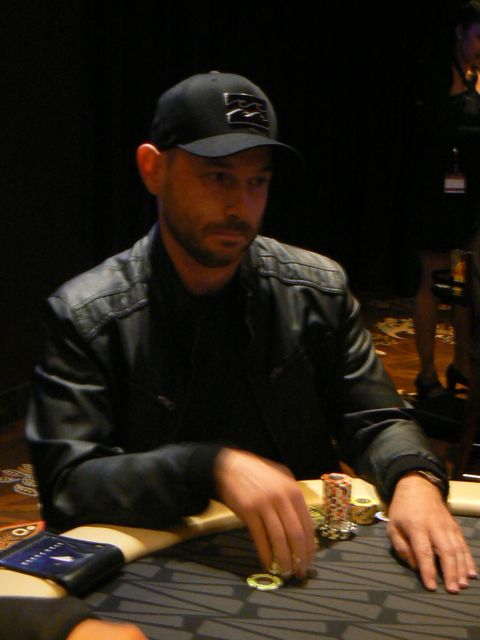 2008 APPT Sydney champion Martin Rowe (pictured above) has just won a nice pot to move to 58,000 in chips – but even he looked a bit surprised about how he eliminated an opponent a few minutes ago.

We caught the action on an A-Q-4 flop with 1,000 in the middle. The turn brought a 7 and Rowe’s opponent led for 4,000. Rowe called and they saw a 2 on the river. His opponent bet 6,000, Rowe raised him all-in and the opponent snap-called, then mucked when he saw Rowe’s A-Q before standing up and exiting the poker room.

As they say, easy money!

Players are heading off on a 30-minute dinner break. We’ve lost 14 of the 273 that started with 259 remaining.

It looks like the $1 million prize pool will be reached with ease here at The Star this week. 556 is the magic number of players we need to get there and with 271 registered for tonight’s flight and 265 already confirmed for tomorrow we’re getting very close.

However, it’s hard to imagine a field of any less than 300 tomorrow at the current rate which would see us create a very healthy prize pool. 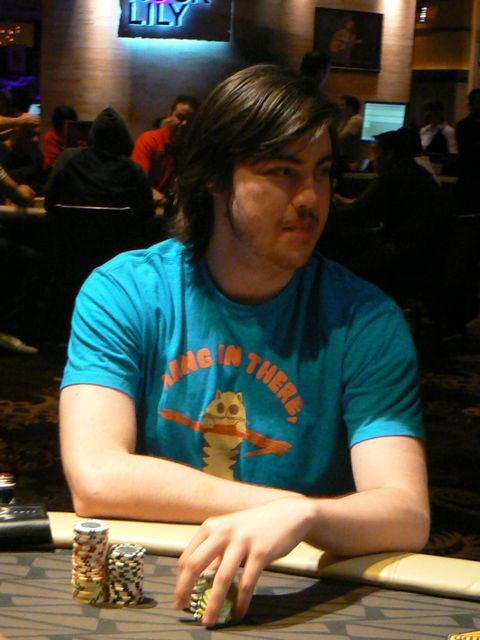 Didier “The Diddler” Guerin (pictured above) has just sent an opponent to the rail in a huge clash on the flop to move to a touch over 60,000 and become one of our early chip leaders.

As the familiar cries of “all-in, call” echoed around The Star poker room, we raced over to find Guerin holding J-10 and his opponent A-Q on an A-K-Q flop. The turn J and river 7 weren’t the miracle cards his opponent was looking for and Guerin is off to a flying start.

Unfortunately his opponent folded so we don’t have a bust-out to report on.Blinds have just jumped to 75/150 as we enter out second hour of play.

It won’t be easy going for the NPL qualifiers given the number of big names we’ve spotted in tonight’s field already. 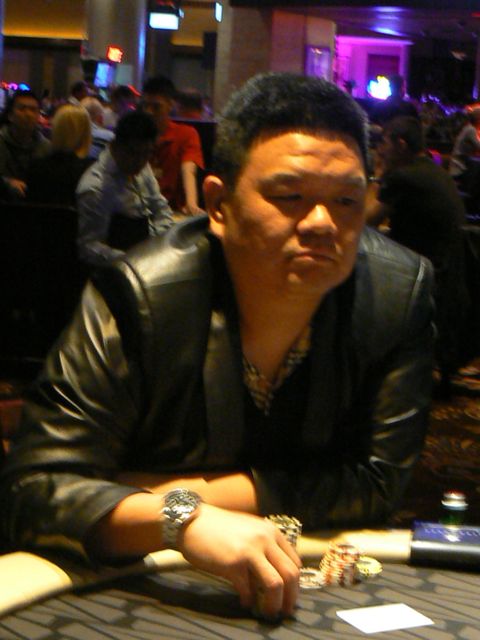 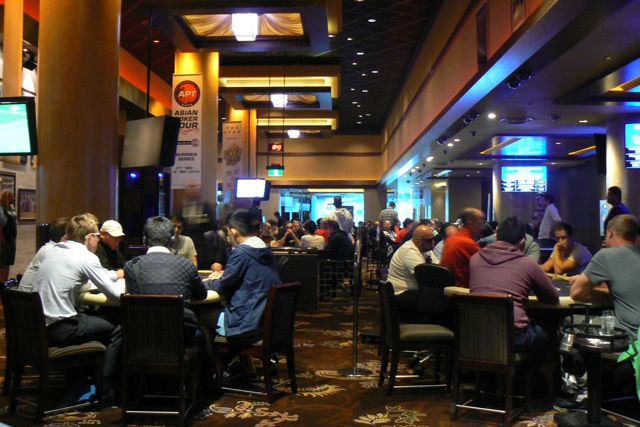 Welcome to The Star in Sydney and the 2013 Star Summer Series. The flagship event in The Star’s annual poker calendar has turned a new leaf this year, having teamed up with both Australia’s largest pub poker league, the NPL, and the rapidly growing Asian Poker Tour to create what is likely to be one of the biggest fields ever assembled in a major poker tournament in Australia outside of the Aussie Millions.

Aside from being able to buy-in for $2,000, players have also been able to satellite in through the NPL and there will no doubt be a number of newcomers to an event of this magnitude.

We currently have 251 players officially registered for tonight’s opening flight and that number should move closer to 300 over the coming hour or so.

APT ambassador and Australia’s 2005 WSOP main event champion Joe Hachem has just announced shuffle up and deal and the cards are officially in the air.

Stay tuned here at PokerMedia Australia for the rest of the night and across the weekend as we bring you all the action from this exciting new tournament.

The World Poker Tour is heading to Australia. Star Entertainment Group and the WPT announced on Wednesday a historic partnership that will see the famous poker tour head Down Under for the very first WPT […]