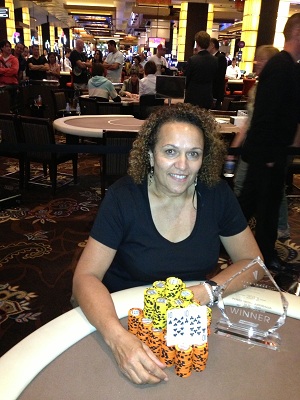 Errolyn Strang has been crowned the latest PokerMedia Australia $1k Special champion, outlasting a top quality field of 91 players to take down the $27,300 first prize.

This is Strang’s second tournament win here at The Star following her stunning success in the 2011 Sydney Championships main event and all of the hard work that she has put into her game in the time since paid off tonight as she rode the final table wave before eventually downing young gun Didier Guerin in a short but sweet heads-up battle.

While it didn’t take long for both players to get their chips into the middle, the final table itself was an exhausting affair – lasting a touch over seven hours including a three hour run between Victor Teng bowing out in 6th and Thang Truong exiting in 4th.

In that time we saw every one of our final five players spend some time at the top of the chip counts before Truong’s departure saw the final order start to take shape.

Soon after, Strang got it all-in against third-place finisher Wei Bing Low with an open-ender and an over-card, her K-7 getting there on the river against Low’s 9s on a 5-6-8-J-4 board to cut the field to two, then winning a classic race to steal the title from Guerin at the death.

Strang has come a long way since Sydney Championships win. Coached by Brendon Rubie, she has enjoyed a stellar few years that also included a second-place finish at last year’s NPL500.

The latest running of the PokerMedia Australia $1k Special saw 91 players take their seats including the likes of Grant Levy, Aaron Benton, Michael Kanaan, Jackie Glazier and Dale Marsland but at the end of their day there can be only one winner.

Congratulations to Errolyn Strang on her latest magnificent achievement!

Didier Guerin came so close to glory but in the end it was a flip for the trophy that saw him bow out in second. With both players feeling the pressure of the rapidly rising blinds, Guerin shoved over the top of Strang’s button open for 500,000 holding K-J and was called by Strang with 10s.

The board ran out 6-Q-3-3-2 and Strang emerges victorious!

As heads-up play gets underway following a short break, Errolyn Strang sits with about 900,000 and Didier Guerin 500,000.

Wei Bing Low has just been eliminated after losing a huge post-flop flip that left him clinging to life.

Two hands later he was eliminated after shoving his final three big blinds with 9-6 and finding no help against Strang’s K-J.

We are now heads-up!

After almost two hours of play we have finally lost another player with a short-stacked Thang Truong forced to shove with J-9 and running into the suited A-K of Errolyn Strang.

The board ran out A-10-8-4-K and Truong’s long and gallant battle comes to an end.

The blinds have just hit 10,000/20,000 with a 2000 ante which, incredibly, means they have no doubled since we last lost a player! Still four remaining and lots of folding going on.

Wei Bing Low just pulled the trigger on a huge semi-bluff with Didier Guerin making an agonised fold. In a blind v blind battle, Low opened to 32,000 with Guerin flatting in the big blind.

The Qc-6d-3h flop saw Low check-raise Guerin’s 25,000 bet to 78,000 with Guerin making the call. The turn was the 8d and Low announced he was all-in. Guerin went deep into the tank before folding with Low showing 3d-5d for a huge semi-bluff. He moves back up to 550,000 after that hand and is our chip leader.

Play has really slowed down over the past few hours with no one willing to get it in light. The current chip stacks are as follows.

Wei Bing Low had just enjoyed a triple-up after picking up Aces and he quickly finished off the night of Con Angelakis on the very next hand. Low opened to 23,000 on the button with Angelakis making the call. The flop came 9-9-8 with both players checking through. When a Q came on the turn, Angelakis check-shoved but didn’t like what he saw when Low snap-called.

Angelakis needed help with his Q-J well behind the A-9 of his opponent and when the river blanked he was off to the cage to collect his winnings.

Didier Guerin has just scored a crucial double to roar back into the race and bring Thang Truong back to the field. The hand started with Truong raising to 22,000 and Guerin making the call on the button.

Guerin showed 10-9 to be ahead of Truong’s K-J but needed to dodge plenty of bullets to stay alive. The 4 was exactly what he wanted to see and we have a contest once more!

Errolyn Strang has just doubled courtesy of Wei Bing Low. Strang was in the small blind and shipped with A-7, Wei tank-calling with K-10.

The flop 9d-6d-2d flop gave Low a truckload of outs with his Kd, but he couldn’t bink any of them as the turn came Ah and the river 2c with Strang back in business with 290,000.

7.35pm: Truong cracks half a million

The relentless aggression of Thang Truong continues with Con Angelakis the latest forced to fold his hand.

It began with Angelakis opening the button to 17,000 and both Truong and Errolyn Strang calling.

When an Ace hit the turn, Truong led for 100,000, essentially putting Angelakis to a decision for his tournament life. He folded and is down to 170,000.

7.25pm: Truong puts the pedal to the metal

Thang Truong isn’t a huge fan of letting his opponents take down pots easily and he has just forced Wei Bing Low into a tough fold. The action began with Truong opening the button to 17,000 with Errolyn Strang calling from the small blind.

Low then bumped it up to 58,000 from the big blind with Truong making the call. The flop came 8-9-J all hearts and Low bet 48,000 but was forced into a painful fold as Truong announced he was all-in. Truong moves to 420,000 with that hand and is looking strong.

There isn’t a lot between our five remaining players with Con Angelakis our current chip leader with 310,000.

Victor Teng has endured a torrid run at the hands of Thang Truong and fittingly it was Truong that finished the job as the two clashed one final time.

The hand started with Teng opening to 12,000 and Con Angelakis calling before Truong raised it up to 30,000.

Teng didn’t hesitate to ship in his remaining 102,000, Truong thinking long and hard before calling.

It was Teng’s 10s dominated by Truong’s J-J and when the board ran out A-5-7-5-J he became our sixth-place finisher.

Didier Guerin raised to 12,000 in the cut-off and James Tai shoved over the top for his last 70,000. Guerin called and was in great shape to win back some chips and eliminate an opponent with his A-K dominating Tai’s K-6.

Wei Bing Low has just won a massive pot at the expense of Didier Guerin thanks to a disastrous river card for the start of day chip leader.

Guerin went into the tank before eventually calling but mucked and hung his head as Low flipped over pocket 9s for the rivered boat.

Guerin has slipped right back to 180,000 with that hand while Low is suddenly our new chip leader.

Players are returning to their seats after dinner to quite a hefty blinds jump with the blinds moving from 2,000/4,000 to 3,000/6,000. We’re expecting the action to heat up pretty soon!

Players are currently on a 30-minute dinner break. We’ll be back shortly to play down to our winner!

Victor Teng has been having a tough time of it recently with Thang Truong forcing him off a number of hands and we just noticed Nabil Edggton giving him a pep-talk away from the table with Teng clearly frustrated by his progress. He sits on 105,000.

A short-stacked Benjamin Benoit shipped it in with A-10 and was called by Con Angelakis holding A-Q. The board ran out 6-Q-2-10-9 and Benoit’s deep run comes to an end.

Thang Truong hasn’t been scared to get involved and he just pulled in a handy little pot after applying the pressure to Victor Teng.

The action began with Teng opening to 6,000 in the cut-off and finding calls from both Didier Guerin on the button and Truong in the big blind. The flop came 2d-7c-10d with Truong check-calling a bet of 8,200 from Teng as Guerin got out of the way. The turn was the 9s and this time Truong led out for 10,600. Teng called.

The river was the 7d and Truong bet 35,000. Teng tanked for some time before folding.

Just moments after we lost our first player, Milan Gurung was all-in for his tournament life. Con Angelakis again opened the action before Errolyn Strang 3-bet from the cut-off. Gurung then 4-bet shoved but found himself in deep trouble holding J-J against Strang’s Queens.

The board ran out 6-7-A-Q-J and we’re down to eight players.

Clement Lau came into today with the table short stack so it was inevitable that his chips would end up in the middle sooner rather than later. That opportunity came after Con Angelakis opened in late position and Lau looked down at A-7.

Angelakis held Q-10 and we were off to the races as the flop came down J-9-2 – giving Angelakis a tonne of outs. One of those was the turned 8, leaving Lau drawing dead as the meaningless 2 came on the river.

The first meaningful pot of the final table has bene played out between Victor Teng and Errolyn Strang with Teng emerging on top. It began with a raise to 5,000 from Teng with Starng calling out of the blinds.

The river was the Qc and when Teng bet 26,100 Strang went into the tank briefly before finally mucking her hand.

Welcome back to The Star and our coverage of the final table of the PokerMedia Australia $1k Special at this year’s ANZPT Sydney.

A total of 91 players took their seats here in the main poker room yesterday with dreams of heading home with the trophy but by the end of the day’s play just nine remained – headed by rising star Didier Guerin with a commanding stack of 321,600.

With play finishing around 11.30pm last night, the remaining players have had plenty of time to rest up and ready themselves for battle and it will be interesting to see how the action develops over the coming hours with the likes of James Tai, Milan Gurung, Thang Truong, Victor Teng and Errolyn Strang all still in the hunt.

Stay tuned as we bring you the wire to wire action on our way to crowning our latest PMA $1k Special champion!

Winner, winner, chicken dinner… Daniel Neilson (pictured above) has overcome a tough heads-up battle with Trent Miller to win the $5K Challenge here at the Star Poker room. Neilson had a significant lead for most […]

Welcome to the live reporting of the 2016 Sydney Championships from The Star. PMA are proud to be providing a live blog of the Main Event which can be found below and at the Star Poker […]