Long before the modern era of poker media, Aussie card players had only one way to keep up to date with the latest news on the local front. Long before Bluff Australasia, PokerNews Australasia and Pacific and The Real Deal, Cards magazine provided Australian poker players with a voice and a source of information.

The editor of Cards from the mid-1980s until 2001 was a colourful Queenslander by the name of Darryl “Dazzler” Lanyon (pictured left). A new generation of poker players got their first look at Dazzler when he ended a self-imposed exile from live poker to play in the first ANZPT Queensland tournament in 2009.

Resplendent in an outfit straight out of the ‘Wild West’ including cowboy hat, Lanyon has since played a handful of other events and provides great company at the table.

So we were thrilled to receive an email from Dazzler informing us of his recent good fortune after winning a Royal Flush Jackpot playing on 888Poker, worth USD $77,739.84!

“It happened so quickly. A major win seems to happen as quickly as the hands are dealt. So the first thing I did was check my account, then take a picture of the screen with the winning hand!” Lanyon said.

“With two-thirds of the win I plan to pay off my house, the rest is going back to poker playing online and live and maybe the Aussie Millions and/or the WSOP Main Event. It is such an addictive game and the time poker will finish for me is when they nail the lid on my box!”

Lanyon said he’d been playing Royal Flush Jackpot tables for five months and had experienced some tough lessons relating to the rules.

“Over that time I won $400 with quad jacks and made two straight flushes. One straight flush was not exposed to the table as I bet the river and the lone opponent folded. In the second I was the only player at the table to pay the 50 cents, and there must be two players minimum contribute per game.” 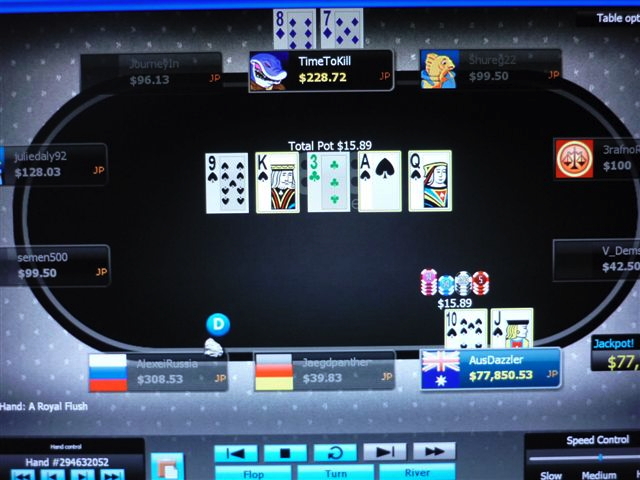 Dazzler also had some advice for players thinking about chasing the Royal Flush odds of about 650,000/1.

“Many players on the Jackpot tables do not pay the 50¢ Jackpot fee and play to catch Jackpot players, going for Jackpot hands. There are lots of three-bets and five-bets pre-flop to make hands expensive for the Jackpot chasers. It would be fun to have Jackpot-only tables where all players must pay the 50¢ to play!”

Tabcorp management have stated they are hoping Australia will legalise online poker so that it can proceed with plans to venture into the Internet gambling sector. “Piloting tournament poker would be an area that should […]

PMA breaking news In a major setback for the Australian poker industry, it was announced today that the Federal Government will not be pursuing recommended changes to existing legislation in support of a trial of […]

Ray Bitar, the chief executive of Full Tilt Poker, has been arrested after voluntarily surrendering to US law enforcement and is being held in New York, according to multiple sources. Bitar, who is from southern […]