One of the biggest tournament series played outside an Australian casino, the $100,000 Newcastle Super Series at Wests Mayfield and Wests New Lambton attracted hundreds of players from across NSW. The big winners came from opposite ends of the poker spectrum – local retiree John Campbell (pictured above), who won the NSW State Champs title and 24-year-old Cameron ‘Ewok’ Shepherd, who claimed his second TeamWSOP seat after winning the NSW Pro Open for October. PMA’s own young gun Christopher Murphy chatted with the two gentlemen.

Christopher Murphy: Congratulations on your big win John, worth $8000 and a MAIN EVENT III seat. Tell a bit about your poker background.

John Campbell: I started playing poker with the APL just after it started in 2006. I’ve never played online. I’ve always been an APL pub poker regular – the APL host great games with good structures. I’d finished fourth and fifth in previous APL State Champs so it was great to actually win this time around.

CM: Who is your favourite poker pro?

JC: Daniel Negreanu because he has an amazing ability to read players; some of the calls and plays he makes are outstanding. I also admire Gus Hansen because of his wild and aggressive play. He shows that poker involves a lot of skill.

CM: Tell us about some of the hands that helped you reach the final table.

JC: Early in the tournament I held pocket aces and there were two all-ins before I acted. I moved all-in and found myself up against pocket sixes and pocket fours. I ended up flopping an ace and taking down a large pot. Another key hand that helped build my stack was a simple pre-flop all-in; I held pocket threes and called the all-in of an early position player holding A-Q. Her hand didn’t improve and my hand held.

CM: You started the final table as the short stack so what strategy did you apply to climb back up the chip count?

JC: I played tight, making moves with junk hands to steal blinds and stay alive. I ended up getting it all-in with A-7 and luckily enough flopped trip 7s. After doubling up, I tried to make a play with 9-7, and found myself behind but made a straight.
Later, I raised with A-K and called an all-in before making Broadway straight to eliminate another player. I definitely had my fair share of luck! Heads up play against Cathy Monaghan didn’t last long, but there were a few memorable hands. Cathy shoved all-in, I called, she showed K-10 and my pocket threes made a set on the flop but she hit the next two cards to make a straight. On the final hand, my A-Q found a Q on the flop.

JC: The big dream is to play and win the World Series of Poker Main Event. But more realistically I’d like to win the MAIN EVENT at Crown. I’ve played the APL Main Event twice before and a win would be great this time! 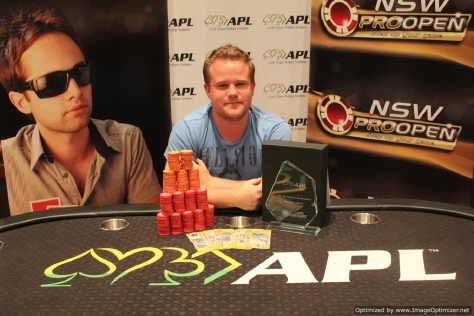 Christopher Murphy: You’re off to Vegas again as part of TeamWSOP after winning another Pro Open title; tell us about your previous experience in the WSOP Main Event.

Cameron Shepherd (pictured above): I only lasted until the final hand before the dinner break on day one. I was coolered early with pocket nines against pocket queens on 4-9-Q flop, then grinded the short stack back a bit. I opened with 7h-8h, was accidentally min three-bet by an old guy who had no idea. The flop came 5h-6h-Jx, I check raised all-in, he called with A-8 and it held. It was a great experience though; I am keen to make more of it this time around though as I’ll be much more prepared. I hope to win it, of course, but I’ll be happy knowing I played the best I could – a nice payday would be good as well!

CM: Tell us a bit about yourself.

CS: I’m 24 and live in Lake Munmorah. I’ve been playing poker for about six years, starting with some friends after school one day. Phil Ivey is my favourite poker player – he’s the best, just totally fearless.

CM: You entered the final table of the Pro Open in pretty good shape; talk us through the road to victory.

CS: I started second in chips with about 700,000 with the chip leader on about 1.6 million. Everyone was playing tight to begin then I started getting aggressive around the MAIN EVENT bubble with five players left and faced little resistance. Once the bubble burst the short stack moved in for 330,000 with blinds 50,000/100,000, big stack calls on the button and I call in the BB with A-10o, flop was K-Q-J and the big stack flatted with A-K so I won a nice side pot as well which made me chip leader.

From there I applied more pressure with no resistance. The former chip leader open shipped on the button with 9c-7c with about 10bbs, I called with A-Q and lost. I knocked out third place with A7 versus A10, then started heads-up play about 3:1 down and doubled up shortly after with Ah-Qh against pocket fours. On the final hand, I held Ah-6h, my opponent showed pocket sevens and I flopped an ace. The atmosphere was great – my opponent had a big rail while I only had about six people!

The excitement of the first World Series of Poker Asia Pacific is building with each week and, thanks to Southern Cross Poker (SCP), you could be the first Aussie to win a gold bracelet on […]

The battle for the Aussie Hold’em Poker Summer Poker Championships Main Event title is into its second day at Club Macquarie in Argenton, NSW. The $110 buy-in Main Event attracted a field of 66 runners, […]

It may be hard to believe when you look at the list of entrants in a major casino event, but female players make up more than 20 per cent of the Australian poker-playing public. On […]