Since 2007, the Australian poker year has ended at The Star in Sydney and, for the sixth year in-a-row, the tradition will continue with the second running of the Star Poker Summer Series.

The regional poker spotlight will again shine on the harbourside property as players from across Australia and throughout the region converge for this series, which runs from November 28 until December 9.

The series culminates on December 6-9 with the $5000 buy-in Main Event – who will join the list of champions that includes Jonathan Karamalikis, Star Poker ambassadors Grant Levy and Aaron Benton or 2011 winner Andy Lee?

In what is now a customary start to all major tournament series at The Star, the 2012 Star Poker Summer Series will kick-off with the $330 buy-in Opening Event featuring three day one flights and the option for players to re-enter thanks to the repechage format.

PokerMedia Australia (PMA) is a proud supporter of Star Poker and we’re delighted to announce the third running of the $1100 buy-in PMA No Limit Hold’em Special Event, which will again be reported live by our team.

The series culminates with a $10,500 buy-in High Rollers No Limit Hold’em. PMA can also confirm that we will again be reporting live throughout the Star Poker Summer Series. 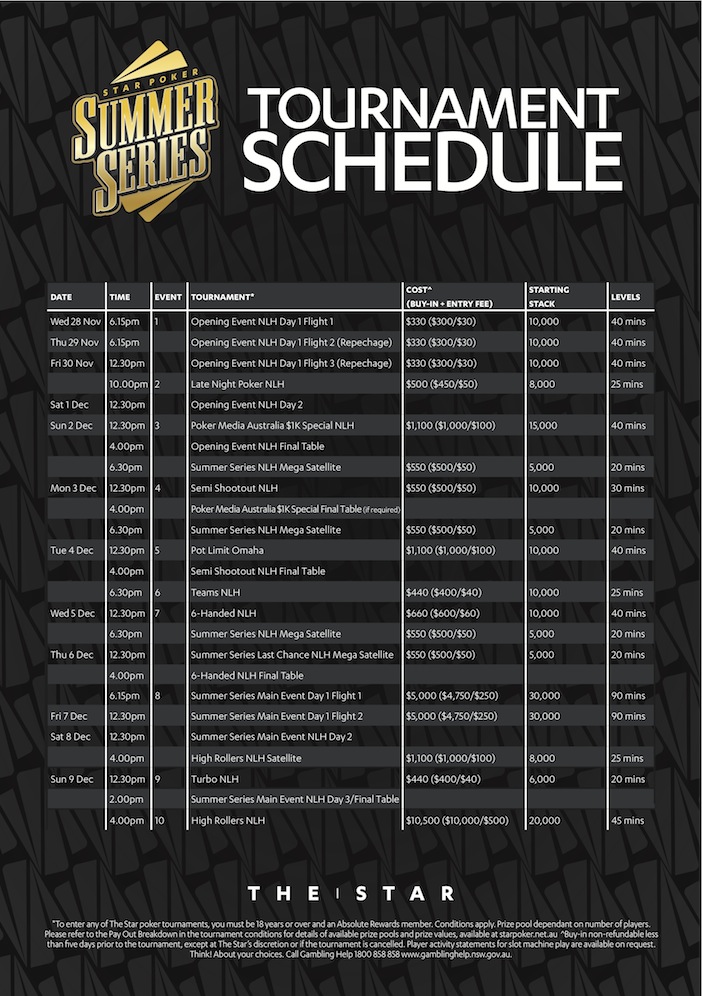 When it comes to poker in Australia, the month of December and The Star have been intrinsically linked since Grant Levy became the first Australian player to win AUD $1 million on home soil back […]

The schedule has been released for the first ANZ Poker Tour event of 2012, with the national poker spotlight set to shine on The Star in Sydney from March 14-25. And the team at PokerMedia […]

A Federal Government source has revealed to PokerMedia Australia that trials of regulated online poker could begin here within 12 months. In a stunning development for the Australian gaming industry, the source also confirmed that […]