Lynton leads at the end of day 1A 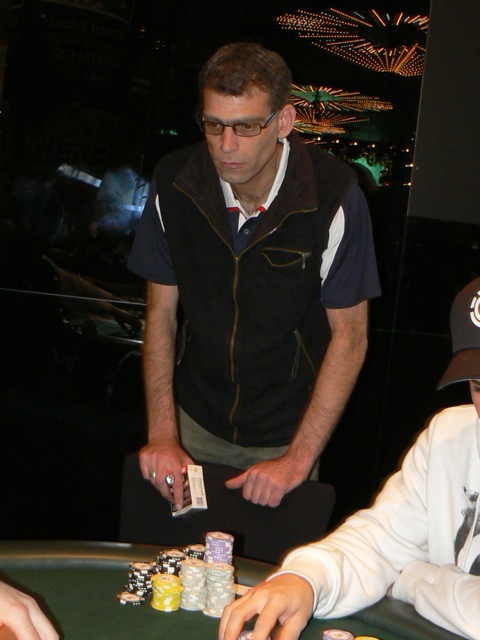 On one of the final hands of the day, there was massive three-way action between Paul Ridsdale (pocket sixes), Jamie Farley (7-9) and Nicole Ferrett (A-K). The board flowed 3-5-9-10-9 to make trips for Farley, sending Ridsdale on his way and putting a big dent in Ferrett’s stack.

Full House Group TD Garth Kay has just issued the order to deal three more hands before the end of play on day 1A of the MAIN EVENT. There’s a big tournament feel in the Crown Poker room tonight with a huge field turning out for the $100 buy-in Thursday Thriller which kicks-off in a few minutes.

Breheny leads into the final level 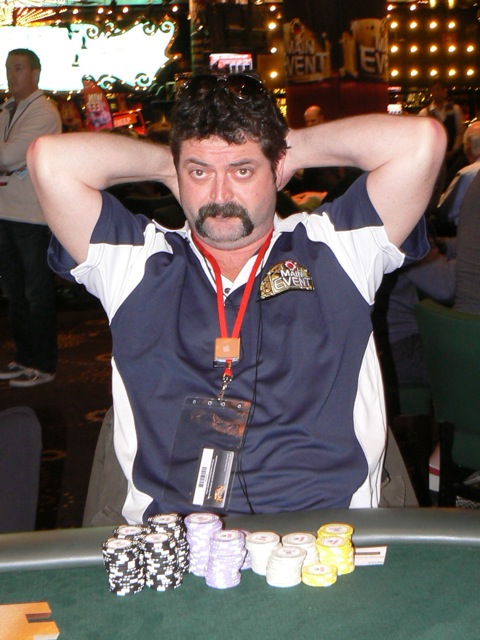 Play has noticeably tightened up heading into the final level of the day (blinds 800/1600 with an ante of 200) with 108 of the 157 starters in contention for a start on day two.

The new chip leader is Michael Breheny (pictured above) on 120,000 – he flopped a full house with pocket nines against the A-K of Nicole Summerside after the board ran out 9-K-K-2-10. 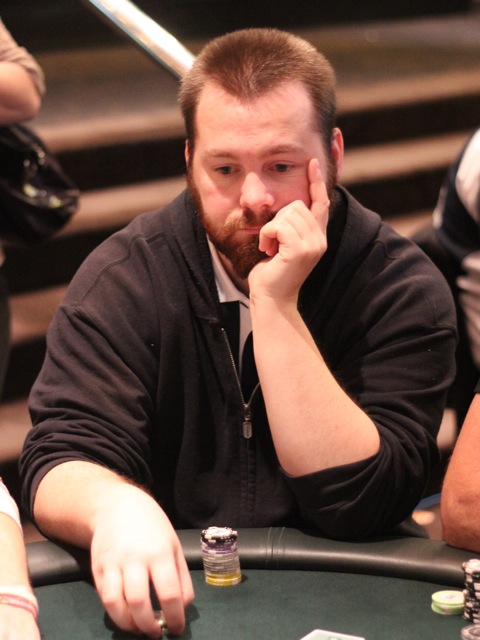 Kym Andrews (pictured above) is a massive chip leader heading into the final 10 minutes of level nine on day 1A of the MAIN EVENT here at Crown Melbourne. Having dispatched Chris Whitmee, Andrews added the scalp of Conan Zeigeler with a rivered set of 10s against pocket aces.

With the board showing 2d-6h-5d-4c, Kym Andrews announced all-in for about 50,000. Chris Whitmee made the call and showed 5-7 but the pocket 10s of Andrews led to the river. The Qc was no help to the highly fancied Whitmee, who attracted plenty of interest on the bookmaker.com.au market for the MAIN EVENT.

Sam Kazonis also failed to make it to the break after the last of his money was committed on a board showing Qh-10d-5s-7h. He showed Ah-Qd to trail the pocket kings of Peter Matthews, and the river K only added salt to the wound of Kazonis. Shane Zoch also departed late in level 8.

Next break coming up

The 30-minute levels tick by very quickly, and there are less than 20 minutes to go in level 8 (400/800 with an ante of 50) and the second break of the day. The steady stream of eliminations continues with Matt Stewart, Beau Hammond and Richard Parker the latest casualties. 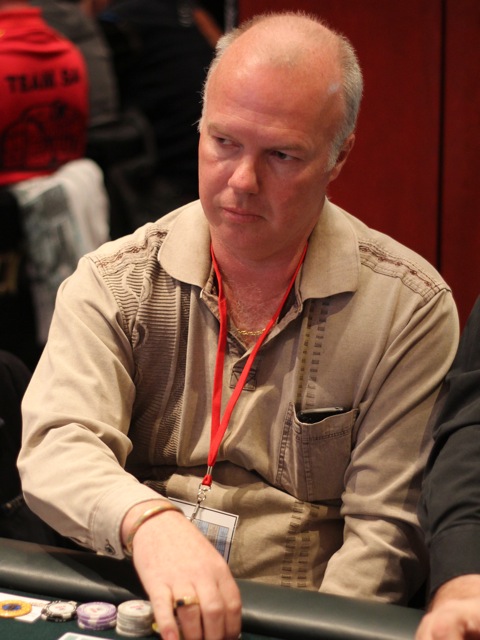 Adam Tilbrook is also out of the event after his K-Q was overtaken on the river by the A-Q of Mick Kearin (pictured above) after the board was dealt K-7-5-9-A. Kearin, who qualified through a $120 Deepstack event in Bendigo, is up to 33,000.

Nines are just fine for Kennedy 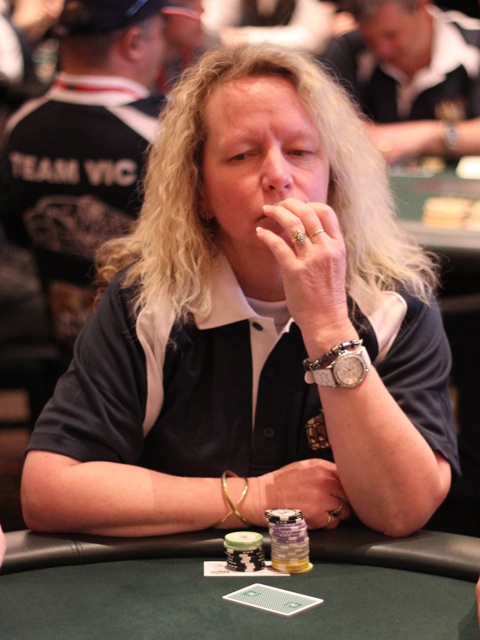 Tasman Lawson’s MAIN EVENT dream is over after running into Pauline Kennedy’s (pictured above) set of nines. The chips were shipped after the flop of 4c-Qd-9s, with an open-ended straight draw for Lawson’s J-10 against Kennedy’s nines. The turn 3h and river 7d were no help, sending Lawson to the rail.

Thomas Sammut is also out of the tournament after the pocket sixes of Javier Luppino improved to a set on the flop against pocket 10s, while Jason Richards has also headed for the cash tables after being eliminated at the hands of Neil Evans.

Lowe on a high 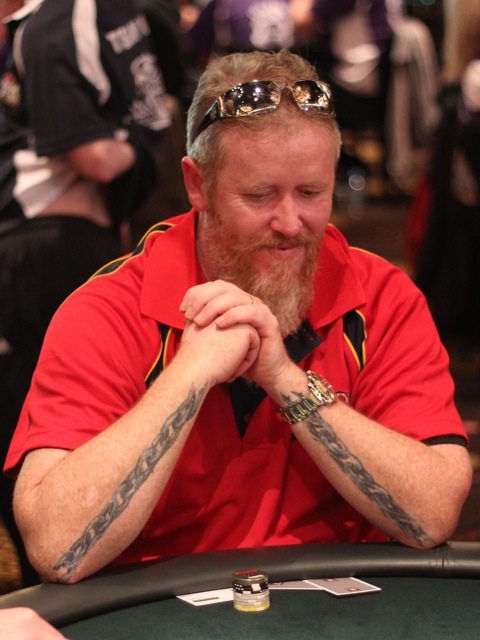 Craig Lowe’s (pictured above) chips seemed to be in the centre every time we walked past table 18, with his latest shove worth just 1600. The caller came thick and fast but a re-raise from one opponent was enough to scare the others away. It was Ah-8s leading Lowe’s Qh-10h, but a 10 on the river was enough for the South Aussie to build his stack back to almost 10,000. With just a few minutes remaining in level seven, there are 139 players remaining, and blinds are about to increase to 400/800 with an ante of 50. 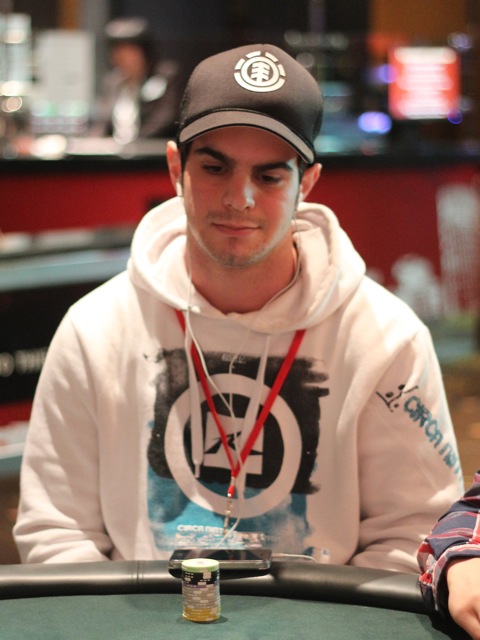 In the biggest hand of the day so far, the money was in pre-flop as Chris Morris (pocket queens) and Dean Lowe (pocket jacks) needed help against the pocket aces of Bill Liapis (pictured above). The board fell 8h-6h-4c-Kh-5s to end the tournament for Morris and Lowe, while Liapis is the new chip leader on 80,000. 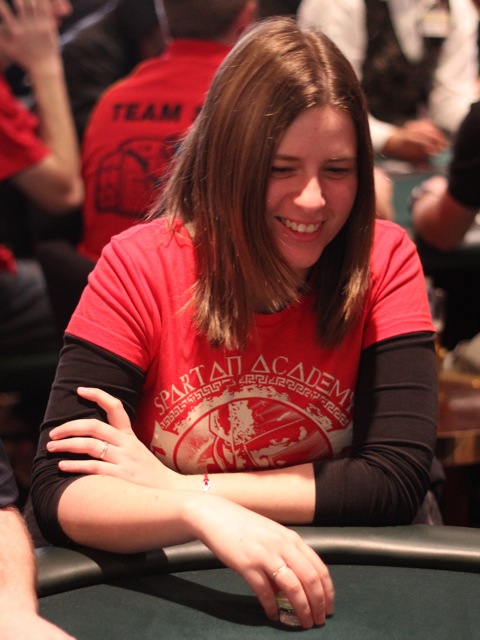 South Australia’s Nicole Ferrett (pictured above) had drifted well below her starting stack in the opening two hours of play but is back in town after sending William Sung to the rail. Sung’s Qd-10h looked in fair shape on the board of 10s-As-10d-4d-6s, but Ferrett held Ad-10c for a flopped full house, sending her stack north of 47,000.

Sad to see you go 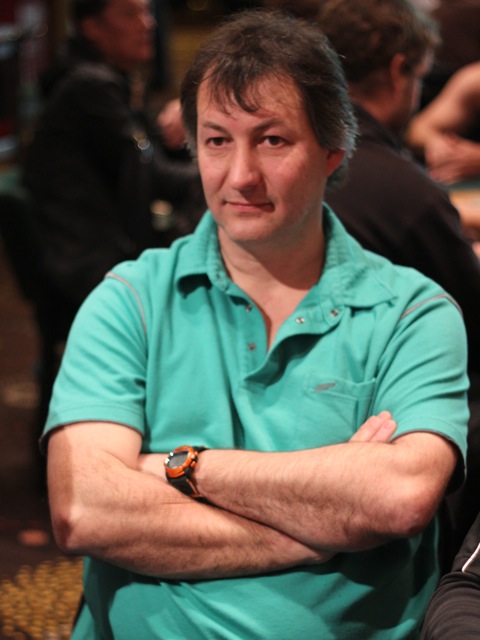 Aces the saviour for Saviour

Just across the floor from our reporting area is today’s feature table, where Klaa Clements and Saviour Agius just went to battle after a flop of 3h-10c-6s. It was aces for Agius against the kings of Clements, and the aces duly saluted to send the Victorian’s stack up to 55,000. Clements is down to 11,000. Players are just about to take their first break of the day, and after their 10-minute breather, blinds will up to 150/300 with an ante of 25.

Having played enough events to qualify for the MAIN EVENT in just a matter of days, poker pro Ricky Kroesen just received a timely reminder of the difficulty negotiating this field of enthusiastic amateurs. The pot grew on each street with Kroesen betting 5775 into a board that fell 10d-5c-Ad-3c-9s. Hobart qualifier Adrian Hodge made a ballsy call and flipped over A-J, which was enough to take the pot and leave Kroesen with just over 10,000. 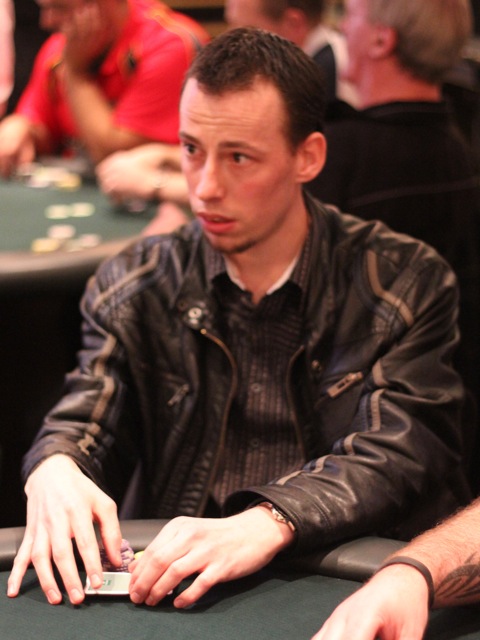 After a tough start to the day, George Georgiou elected to make his final stand early in the fourth level (100/200, ante 25) with the board showing K-6-10. He shoved for 2675 but Clint Robinson (pictured above) couldn’t wait to follow him into the pot, showing pocket aces. The board ran out 2-9 sending Georgiou to the rail. 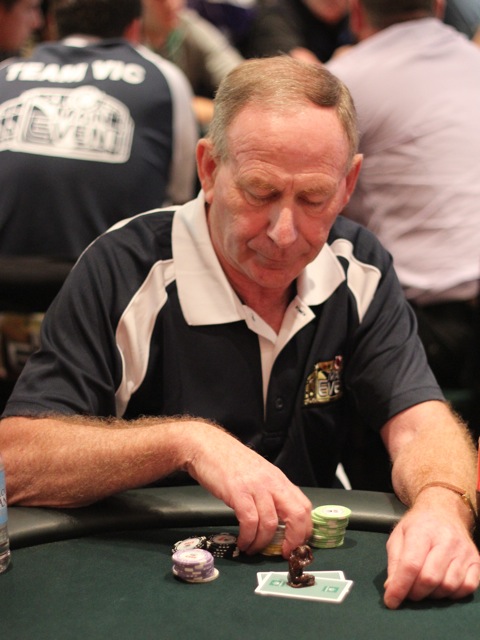 Double-ups will be few and far between in the early going, but Paul Rich (pictured above) has just bolstered his stack after committing his stack on a flop showing 7h-3d-10c. Shane Zoch made the call and flipped over pocket aces, but he needed help against the pocket 10s of Rich, which didn’t eventuate.

Today’s field has been confirmed at 160 players (there were four no-shows) while 304 players are already locked in for tomorrow’s second day one flight. Five seats will also be up for grabs in tonight’s Last Chance Satellite.

Steady as she goes

Play is deep into level two (75/150) of the opening flight in the MAIN EVENT. Not surprisingly, play is fairly sedate as players wield their start stack of 30,000 with caution.

In the first MAIN EVENT, the entire field was seated for day one while this time around, it’s an extended long weekend for our visitors from Tasmania and South Australia while the Vics will be hoping be back here on Saturday for day two.

Players from NSW, Queensland and WA will take to the felt tomorrow. Adam Muarem, representing the Hoppers Club in Melbourne’s west, is the chip leader on 65,000. 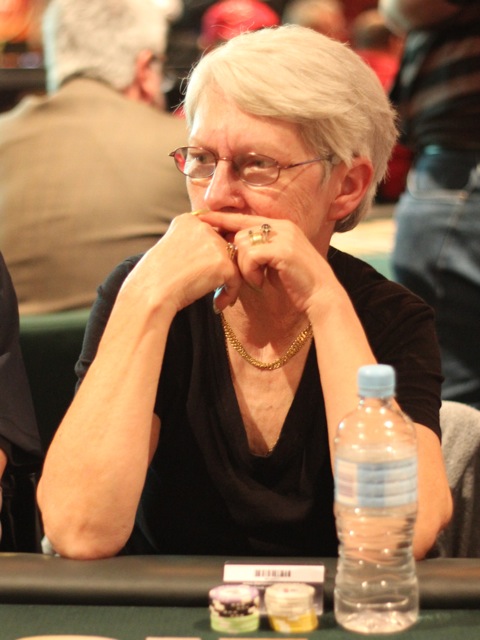 Amid the scores of qualifiers from the 888PL, APL and Pub Poker, there are also a smattering of players with plenty of experience in the pro ranks. Well known Queensland pro Ricky Kroesen qualified into the MAIN EVENT via a Last Chance Satellite, Tom Wing (2011 ANZPT Melbourne final table) and Kahle Burns (third in last month’s Sydney Champs Main Event) are among the players who’ll contest the MAIN EVENT. Craig Ivey, who captained the inaugural TeamAPL to the 2009 WSOP is playing today, along plenty of familiar faces who’ve run deep in recent State Champs in Victoria, Tasmania and South Australia. 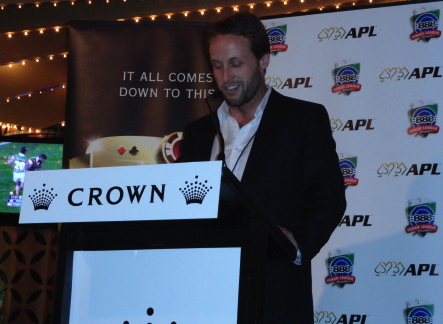 Seconds out, let’s get ready to rumble

In one of the more dramatic openings to a major tournament that you’ll witness, two horn players have escorted the first prize cheque (unsigned at this point) into the Crown Poker Room to the Theme from Rocky! Full House Group chief Brayden Haynes (pictured above) then addressed players before tournament director Garth Kay issued the order to shuffle up and deal. Cards are in the air for the 170-plus players in action today.

Countdown to the opening hand

Players are starting to nervously pace the areas adjacent to the tournament area in the Crown Poker room with the start of play in the second MAIN EVENT less than 20 minutes away. Many have donned their MAIN EVENT polo shirts while others are wearing the colours of their regions like the APL Hobart crew who are here in big numbers in their distinctive purple.

As previously mentioned, the team from bookmaker.com.au are ringside with us for the MAIN EVENT, with their overall event favourite Melissa Kronert ($31) scheduled to take her seat today. Other highly fancied runners including Jo McDonald ($41) and Pat Dillon (one of the big market movers, in from $201 to $51) are also playing in the opening flight. To have a punt, click here

What’s in store for the opening flight

In an innovation for the second edition of the MAIN EVENT, the field has been split into two opening day flights. Today’s (Thursday’s) flight consists of qualifiers from Victoria, South Australia and Tasmania.

According to the latest entry list as at September 4, the field will consist of 158 players (listed below). Play will start at 12.10pm in the internationally renowned Crown Poker Room, with 11 levels of 30 minutes scheduled: 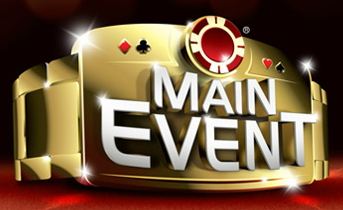 It’s time for the MAIN EVENT

Welcome to PokerMedia Australia’s coverage of the MAIN EVENT, live and exclusive, from Crown Melbourne. The bar was unquestionably raised for Australian poker earlier this year when players under the Full House Group banner – representing the 888PL, APL and Pub Poker brands for the first time since they were merged – amassed at Crown Melbourne for the first running of the MAIN EVENT.

Although this was a new tournament, the MAIN EVENT carried on a proud tradition of qualification-only major events offering hundreds of thousands of dollars in prizemoney dating back to the earliest days of the industry more than six years ago.

It also marked a new standard for players to aim among the myriad games offered by the leagues – from nightly free games through to regional and special events and State Championships.

The first MAIN EVENT attracted a massive field of 559 players set off in pursuit of a slice of the $559,000 prizepool, which included a $15,000 Aussie Millions package plus a magnificent ruby-encrusted $8000 championship bracelet.

Continuing a long line of champion poker players from Wollongong, Gauci won a $120,000 prize package that included a $15,000 TeamAUSSIEMILLIONS package plus an $8000 MAIN EVENT bracelet while Sydney grandmother Marion Fisher was more than happy to sign the payout sheet to secure her $85,000 package.

This edition of the MAIN EVENT will again offer a guaranteed prize pool of at least $100,000 for first place, and capped at 600 runners, Full House Group is once again expecting a great turnout.

American Bryn Kenney is the 2019 Aussie Millions champion after beating a record field of 822 players to the title. But his win didn’t come without controversy with a three-way deal that included the trophy […]

The Melbourne Poker Championship holds a special place in local poker history. It pre-dates the first Aussie Millions by several months (David Szetho won the first title in 2002, defeating a field of 66 to […]