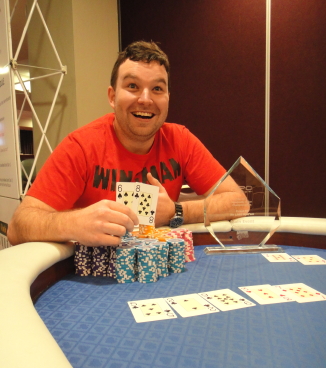 And congratulations to Player of the Series Stan Barker (pictured below), thus earning entry into the Spring, Summer and NPC VII Main Events. 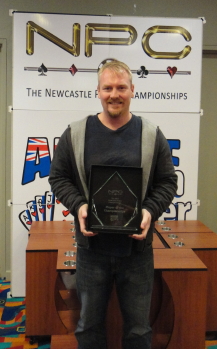 Parton’s party over just as it got started

Barry Parton has joined the final table party, sending Ben Kostrzewski to the sidelines in sixth position ($550). Kostrzewski was all-in for 170,000, Parton made the call with A-K and found himself racing pocket deuces. The Kh on the flop was enough for Parton to scoop the pot.

However, Parton soon found himself at the mercy of the unstoppable Mick Gallen, losing a race of his own with K-J against the pocket sixes of the chip leader. Parton pocketed $650 for fifth.

Gallen was at it again with pocket fours against the all-in player Michael Davey’s A-9. Davey found an ace on the flop, but Gallen also made a set to leave Davey on his way to pick-up fourth-place prizemoney of $850.

With blinds at 3000/6000 and an ante of 500 for the start of the final table, Jamie Loersch was the first departure after raising pre-flop and receiving a call from Mick Gallen.

After a flop of Jc-6s-4d, Gallen bet 30,000, Loersch called and they saw a turn of 10c. Gallen made it 60,000, Loersch again called with the river falling 6s. Gallen declared all-in, Loersch called but mucked his cards when Gallen showed Q-J for two-pair. He took home $250 for ninth.

Dave Haas’s hopes of joining wife Leanne in the last two were dashed, also at the hands of Gallen. Haas shoved all-in for 107,000 after a raise to 20,000 from Gallen. He called and they watched the board run out Ah-2h-8h-6h-Qc. Haas turned over kings but Gallen’s pocket 10s included the 10h, making him a flush. Haas took home $350 for eighth.

Gallen continued to steamroll the final table after calling the pre-flop all-in of Terry Johnson for 38,500. The board showed 5d-5c-Qd-2d-Ks, with flopped trips enough for Gallen to take the pot while Johnson left in seventh for $450. 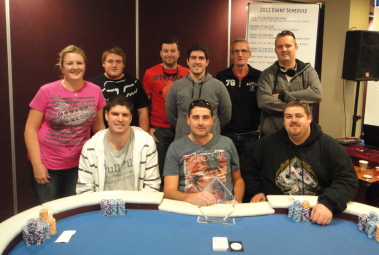 The final table for the Main Event has been decided after a torrid level with blinds at 2500/5000 with an ante of 500.
Douglas Dixon suffered a tough beat when Barry Parton made a straight flush against Dixon’s flush. Adam Mujic departed in 15th, Marcello Capone fell to a turned set of queens (14th) while Kelvin Alderson was KOed in 13th.

Michael Long left the tournament area in 12th after marching pocket kings into pocket aces, Dixon eventually fell in 11th while the final table was decided when Steve Ruiter was sent to the rail in 10th.

Gallen on top with 16 to go

The final 16 players have been decided with Mick Gallen now a clear chip leader on 300,000 ahead of Wesley Edmonds (180,000) and Leanne Haas (160,000). Others still in the hunt for the title are Terry Johnson, Douglas Dixon, Barry Parton, Ben Kostrzewski, Michael Davey, Marcello Capone, Steven Ruiter, Michael Long, Kelvin Alderson and Adam Mujic.

Parton scored a timely double-up through Dave Haas when his pocket kings flopped a set against pocket aces, but Haas doubled himself next hand through Michael Davey. Again, he held pocket aces!

Haas was again at the heart of the action after winning a big pot from Terry Johnson. On a flop of 10h-Js-Ks, Johnson pushed all-in and Haas called, with Kh-9x against Kd-Qc. Haas was in bad shape but when the turn came a 6h and a river Ah, he’d made a runner-runner flush.

Douglas Dixon sent Michael Whiteman to the rail in 18th (pocket 10s held up against A-4) when Johnson KOed Tameeka Jones in 17th after flopping a set of threes against A-10 on a board of 9s-3c-Ks-8h-4d.

Adam Mujic was able to replenish his stack through Douglas Dixon when he rivered a flush against pocket jacks but Carter bowed out when Gallen’s A-10 outkicked A-8 on a board that flowed Ad-2c-6c-Kd-5d.

Day one of the NPC VI Main Event has come to an end with 19 players still in contention for the title. During the final level (blinds 600/1200, ante 100), Daniel Davies was KOed by Michael Gallen, who raised a flop of Qd-6h-4s with Davies making the call. The turn fell 7s – Gallen bet 9000, Davies announced “all-in” and Gallen called, showing K-Q. Davies held Q-J, with the river 2c not helping his cause.

Sid Janik was also eliminated just before the end of play when he shoved with pocket sevens but Michael Davey held pocket kings, which improved to a set. Play resumes at Club Macquarie for day two of the NPC VI Main Event at noon on Sunday. Also scheduled for today is a $550 No Limit Hold’em High Roller, with starting stack of 30,000, 30-minute levels and dealers at each table.

Pressure mounts on the short stacks in the NPC Main Event with blinds up to 500/1000 and an ante of 25. That’s of little consolation of Jason Lozanovski, who has just been eliminated in the most sensational of circumstances.

David Haas raised pre-flop to 2500, Lozanovski and Capone called and the flop came 5c-Ks-10s. Capone declared all-in, Lozanovski called and Haas stepped aside. Lozanovski showed Kd-Kh for top set while Capone held Js-Qs. The turn was Ah and the river of As, making Jason Lozanovski kings full of aces but Capone hit a Royal Flush (pictured below)! 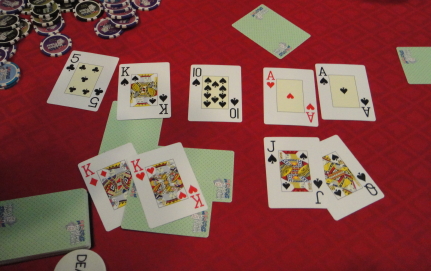 It’s tight at the top

Janik jumpin’ up the chip count

Blinds are up to 200/400/25, and we’ve just watched the biggest hand of the tournament after a flop came 6c-2s-2c. David Smith bet his last 7000, Daniel Orr called as did Sid Janik. The turn was Qs – Orr shoved all-in, Janik called, Orr turned over As-Qc, Smith showed pocket fives and Janik revealed pocket sixes. The river flowed 10c to bust Smith, take a big slab off Orr and win Janik a big pot.

Aaron Bolton’s crippled stack now resides with Tameeka Jones after the last of his chips were committed with pocket eights on a flop of Q-5-7 rainbow only to find Jones holding K-Q. Turn 10, river 3 and Bolton is bust.

Duffy’s chips didn’t last long after his pocket kings were overtaken by the two-pair of Ben Kostrzewski while Nichols is now among the chip leaders after dispatching reigning TOC champion Britney Hillier to the rail.

Cheryl Sabatino showed that a good fold is just as important as the right bet when she found herself in a big pot with Tameeka Jones. With blinds at 75/150, Jones raised to 650, Sabatino made it 2125, Jones popped it to 3800 and Sabatino called.
The flop fell 9c-4s-3c, Jones shoved all-in and Sabatino folded, Sure enough, Jones held pocket aces and Sabatino folded pocket kings. Nice play.

Recently returned from a successful trip to Las Vegas with husband Dave, Leanne Haas has just sent arguably the best-credentialed player in the field, Matt Wakeman, to the rail. There was already 2000 in the pot when the duo saw a flop of Qd-8d-2h. Wakeman bet 1800, Haas re-raised to 4000, Wakeman called and the turn fell 5d. Haas shoved, Wakeman called and showed 6d 4d for a flush but Haas flipped Ad-2d for the nut flush. Championship points leader Stan Barker has also been eliminated from the NPC Main Event.

Freeman paid off with quads

It’s been an unhappy start to the Main Event for Aaron Bolton. With blinds at the minimum 25/50, Bolton and Greg Freeman saw a flop of J-9-9. Check-check and the turn fell 9. Bolton bet 200, Freeman called and the river came an A. Freeman bet 500, Bolton popped it to 1300, Freeman shoved all-in and Bolton called. He showed A-10 for a full house, but Freeman held the case 9 for quads!

Ricky Lim escaped a similar fate when Calan Wright re-raised to 2600 after Lim bet 1400 on a board of 3h-8d-8s-10s-8c. Yep, Wright held the other 8. With blinds at 75/150, Maris Lee became the first player eliminated when Terry Johnson made a nut flush against pocket eights. Others to hit the rail in the early going included David Lloyd, Deanne Alvarez, Gavin Eke, Jamie Redding, Bill Delaney and Chris Boudan.

Cards in the air for 2012 NPC Main Event

Welcome to PokerMedia Australia’s coverage of the sixth edition of the Newcastle Poker Championships Main Event from Club Macquarie. First held in 2007, Steve Cockerill was the inaugural winner (taking home $5000) while others on the NPC honour roll include Mark Blandon (2008), Chris Rowlands (2009) and Ken Curry (2010) with Dean Allison the defending champion from 2011.

The NPC Main Event is a $220 No Limit Hold’em tournament with a starting stack of 20,000 and 45-minute levels. Not surprisingly, the bulk of the players who’ve dominated the previous seven days of NPC action are out in force tonight.