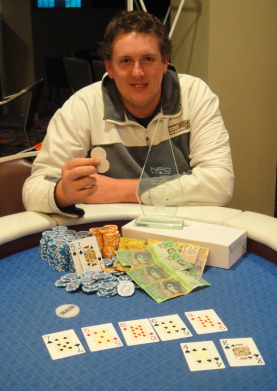 Daniel Davis (pictured above) scooped up almost a quarter of the scalps on offer as he charged to victory in the Newcastle Poker Champs NLHE with bounties title. It was Davis versus Shane Fitzsimmons for the crown with the latter shoving in the last of his chips pre-flop holding Kc-4s. Davis snap-called and showed Js-5s. The board was dealt 7c-5d-10d-6c-9d with the pair of fives enough for Davis to pocket a total of $1300 for first prize and 16 bounties. Fitzsimmons collected $750 for second and his 13 bounties.

Earlier, Terry Johnson was the first player KOed from the final table when his 7-6 only managed to make one-pair against the pocket queens of Mark Bartrom. Davis collected the bounty of Cliff Mannix (eighth) while Fitzsimmons was responsible for the elimination of Ryan McLaren in seventh and Stephen Shelly (sixth).

Bartrom continued his strong series with a fifth-place finish ($250) after the A-J of Davis found an ace on the river against pocket jacks. Davis again came to the fore when his modest 8-2 improved to a straight against Stephen Dick’s two-pair, sevens and sixes. Alex Spinks finished third (worth $400) when Davis’ pocket sixes held up against Ks-Js.

The race for spots at the final table is heating up with Scott Kerr staking an early claim after acquiring the bulk of Blake Glennie’s chips when his A-10 improved to two-pair against pocket kings. Daniel Davis sent Kris Kerr to the rail in 16th before Stephen Shelly picked up the bounty of Michael Blacktop (15th) and Stephen Dick eliminated Tameeka Jones in 14th.

Glennie managed to nurse his crippled stack through to 13th, Shane Fitzsimmons hit a set of eights on the river to KO Scott Kerr (12th), Davis picked up another bounty when Adam Mujic departed in 11th and Marcello Capone fell one spot short of the final table in 10th.

Fitzsimmons skips clear of the field

We just watched Adam Wales (runner-up in the Pineapple event) get into a big pot with Cale McLean with the chips going into the middle on a board showing 6c-As-Ac-4c-2c. Wales showed Ah-Jd for trips but McLean scooped the pot with Qc-9c for a turned flush.
Luke Kerr and Jamie Blows have just scored valuable double-ups while Cliff Mannix has climbed off the floor, taking his stack of 700 up to more than 50,000. Meanwhile eliminations have included Rhys Gregson, Cliff Mason and Matthew Terry. 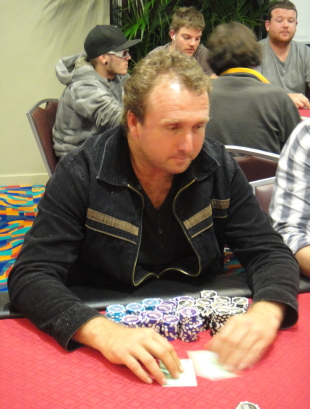 Time to do some bounty hunting

A field of almost 70 players have taken their seats at Club Macquarie for the latest tournament on the NPC VI schedule – an $80 buy-in No Limit Hold’em with Bounties offering a guaranteed prizepool of $3000.

Some of the biggest names on the regional poker scene are out in force tonight including Steve Shelly, who won a package through Aussie Hold’em to the Aussie Millions Main Event, where he placed eighth for $120,000.

Joshua Christie, the winner of this event in NPC V claimed four bounties this year before he was knocked out. Last year he took 12 bounties before winning.
Shane Fitszimmons (pictured left) scooped a dozen bounties in the early going as the field was quickly reduced to 24.

Heath Stewart wins NPC VI Six-handed title Heath Stewart (pictured below) has taken out the second title for the Newcastle Poker Championships at Club Macquarie, besting a field of 78 players to claim the $800 […]