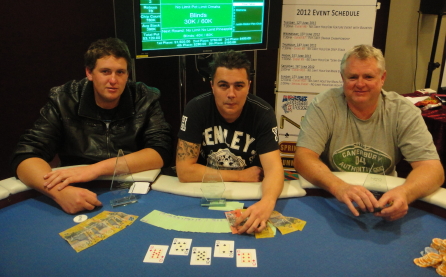 Battling the imaginatively named Beiber’s Fan Club for the title, the end came on an Omaha hand with Jamie (9c-Qc-10h-8h) and Alan (6s-10s-Kc-As) when the chips were committed pre-flop. The board fell 8c-2s-6d-5s-9d, and two-pair was enough for Jamie to scoop the pot and the win for Team Stallions. Beiber’s Fan Club collected $780 for second.

Earlier Davis had ensured Stallions a spot in the last two when he looked down to find A-K after Ryan Hanna from 2 1/3 Midgets had shoved with 8-4. Aces on the flop and river sent the pot to Stallions.

SCT finished in fourth-place ($280) when the pocket aces of Jacob Watson improved to a full house on a board of 8s-Ks-Kc-3d-Ad against the Qc-9h of SCT’s Tom Micevski.

A full range of poker skills are on display in the NPC teams event as shown by the recent battle between Alex Muzenda and Jamie Blows in the Pineapple round.

The river came 10c – Muzenda bet 1600, Blows shoved all-in to a snap call from Muzenda. Blows showed Kd-Jd for a flush but Muzenda took the pot with Ah-10d for a rivered full-house.

A teams event with a difference

The Aussie Hold’em team have also devised an intriguing bent on the traditional teams event format as part of the Newcastle Poker Champs.

Event 5 is a three-man teams event featuring No Limit Hold’em, Pot Limit Omaha and No Limit Pineapple. All team members will play the first three levels then after the first break, the stacks will be combined and players will switch every 20-minute blind level.

Among the early movers was the team featuring Kate Smith after Kira Pearson ran A-Q into her pocket aces. The board was revealed Ad-8d-6h-8h-10d making Smith a full-house and eliminating Pearson’s stack from play.

Mark Bartrom wins NPC VI Event 1 Mark Bartrom (pictured below) has etched his name in the Newcastle Poker Champs record books as the winner of the opening event for 2012. Holding an almost 3:1 […]