Mark Bartrom (pictured below) has etched his name in the Newcastle Poker Champs record books as the winner of the opening event for 2012. Holding an almost 3:1 chip lead over Blake Glennie, the duo agreed to a split of $1150 each, leaving $220, the trophy, championship points and bragging rights on the table. 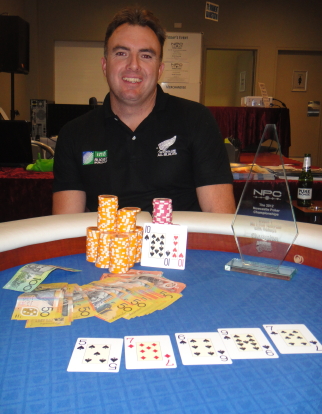 It didn’t take long for the chips to be shipped into the middle when Bartrom declared all-in (pocket 10s) with Glennie calling and turning over A-9. The board of 6h-5s-7d-9h-7d left Bartrom’s 10s ahead as celebrations kicked-off at Club Macquarie.

Earlier, Glennie dispatched Annette Clifford in third ($680) when his pocket kings prevailed against a flopped pair of sevens while Dave Haas placed fourth (for $480) when his A-4 fell short against Mark Bartrom’s Q-10 after the board fell 10s-Kh-9c-4s-9d.

Dave Haas is on a charge toward the NPC Event 1 title after sending Samantha Lewis to the rail in fifth ($390). The K-Q of Haas improved to two-pair on the flop, which was enough to take the pot ahead of the A-4 of Lewis.

Blinds are up to 8000/16,000 in the NPC opening event, which just ended for Linda Wooster. With the flop showing 5c-Ks-Jc, Mark Bartrom bet 35,000, Wooster declared all-in for about 100,000 and Bartrom called only to find her A-10 dominated by pocket aces. The turn Jh and river 4d brought no joy.

More action at the opening event final table (line-up pictured below) after Blake Glennie committed his remaining 91,000 in chips. Dealer Steven Findlay sent his last 68,000 into the pot with Kyle Ives making the call. Glennie held pocket sixes and Findlay showed Ad-10d with a six on the river making him a set to win a huge pot, Ives was almost felted and Findley was out in eighth for $220. 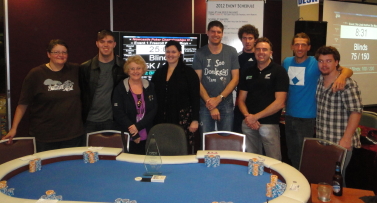 Final table action is underway in event 1 with Alex Wooster taking out 10th and the first spot in the money despite bubbling the final table. With blinds at 5000/10,000, Michael Duffy shoved all-in for 102,000 with Dave Haas going along for the ride.  Duffy’s pocket nines were racing A-K with the Ad on the flop enough to ship the pot to Haas. Duffy was out in ninth for $170.

Bartrom startin’ to make a move

Just 12 players are in contention for the NPC opening event title with some key hands helping decide the line-up. Mark Bartrom staked his claim for the title in a massive three-way pot featuring Marsh Lee (Ac-Kc), Peter Wells (Ks-Jd) and Bartrom’s As-Jh. The board came Jc-2h-10c-3s-8d, leaving Bartrom to scoop the pot worth more than 200,000. 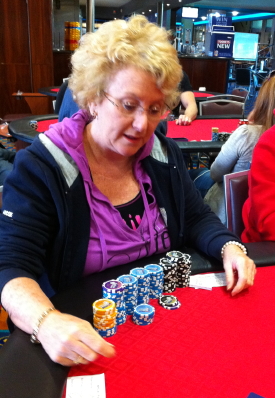 Linda Wooster (pictured above) looked in good shape to send Calan Wright to the rail when she called his all-in of 31,5000 before the flop. Wooster showed Ac-Ks to have Wright’s Ad-Qd dominated. That was until the board flowed 10d-3c-8c-6d-4d making Wright’s flush.

The field in Event 1 is down to just 16 players and two tables with just six players poised to miss a slice of the prizepool. We just watched a hand where, with blinds at 1000/2000, Sean Knight raised to 7000, Tameeka Jones called and Kyle Ives declared all-in. Ives snap-called but Jones thought long and hard before making the call.

It was Ad-Kd for Ives against Knight’s Ah-9h and pocket eights for Jones. The board fell As-Jh-3c-2c-Ac shipping the pot to Ives. Tom Micevski also picked up a big pot when his pocket kings prevailed over the pocket fours of Aaron Bolton with his hand improving to a set on the flop.

Haas nears top of the class as day 2 kicks-off

Welcome back to Club Macquarie for day two of the Newcastle Poker Championships, featuring day 2 of the NLHE Freeroll w/ $10 rebuys and the $33 NLHE Six-handed event (kicking off later this afternoon). In the opening hour of play, 10 of the 45 players who returned for day two had been sent to the rail, leaving in contention for a share of the $5180 with the winner assured a $1560 payday. 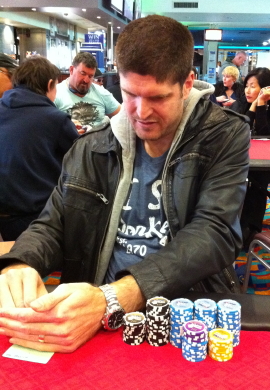 Overnight chip leader Linda Wooster continued to build on her stack, which is up to 140,000 from 115,000 but there have been some big moves by Samantha Lewis who doubled her stack up to 110,000 and David Haas (pictured above) who quickly built his overnight stack from 33,000 to be in second spot with 120,000. David and his wife, Leanne have just returned from Las Vegas where Leanne won $12,000. 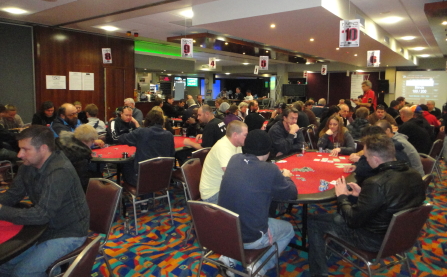 The chips have been bagged after the opening night of play in the Newcastle Poker Championships at Club Macquarie. The NLHE Freeroll with $10 rebuys drew a field of 95 players with 45 set to return at noon today for the race to one of 10 spots in the money.

The drama continues at Club Macquarie after Charmaine Harrison-Williams took down a big pot with a straight flush. Holding Qc-9c on the button and with blinds at 100/200, she watched Michael Whiteman limp from middle position, Charmaine made it 500, Tim Leight called in the big blind as did Whiteman.

Players in the opening event of NPCVI are enjoying a well-earned break after a frenetic start to the series. The field of 95 players splashed the cash with 348 rebuys thus generating a prizepool of more than $5000, smashing the guarantee and ensuring the top 10 players will be paid.

One of the most dramatic hands of the opening session – indeed, the first hand of the night – featured Danny Hobby and Ryan Hanna. With blinds at 25/50, Hanna raised to 150, Hobby called and they saw a flop of Qd-Js-Jd. Both players checked, the turn fell Ks, Hobby checked, Hanna bet 350 and Hobby called. The river fell 10d, Hobby checked, Hanna declared all-in and Hobby snap-called, showing pocket queens for a full house. Hanna revealed Kc-Jc for an inferior boat – rebuy! 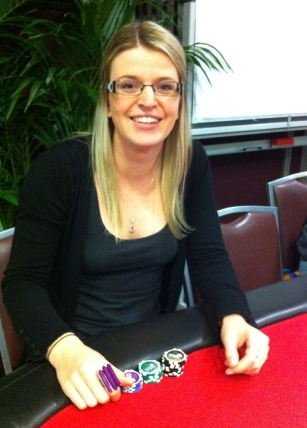 Welcome to PokerMedia Australia’s coverage of the 2012 Newcastle Poker Championships. First held in 2007, the nation’s longest running major championship series is being held for the sixth time this year.

Befitting a series of this stature, events will run over a 10-day period from June 8-17 at Club Macquarie. Servicing the communities of Western Lake Macquarie and surrounding districts with a modern club and relaxed friendly atmosphere, Club Macquarie has become a key element of the NPC.

Without a doubt, the NPC schedule is the most diverse for any pub poker championships series in the nation. Indeed, for versatility, it’s right up there with the best casino tournament series.

More than 80 players were seated for the start of play with an additional dozen or so by 8pm. In early action, Abby Gilbert (pictured left) took down a massive pot with four players all-in against her pocket 10s. A T in the flop plus a T on the turn gave her quads and a healthy start to the evening!

Aaron Bolton wins NPC VI Pineapple title Aaron Bolton made a fruit salad of the field in the $11 Pineapple tournament (one rebuy, one add-on) to claim the fourth title of the 2012 Newcastle Poker […]