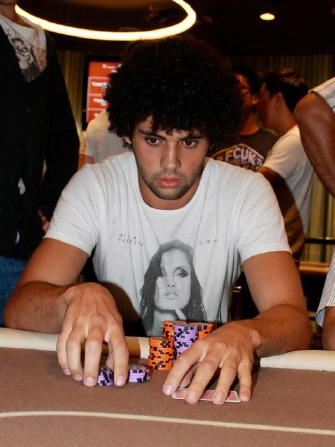 It’s normally the Main Event that attracts all the attention but all eyes were on the ANZPT Sydney NLHE Teams Event last night with a star-studded line-up of sporting stars joining the packed field of poker pros at The Star.

Over dinner at The Star’s Fat Noodle, Farah was quick to remind the sporting contingent of his deep run in last December’s Star Poker Summer Series Main Event, and bragging rights were again up for grabs this time around.

Winners of the last-longer bet among the group were Gibbs and Fulton, who grimly nursed a short stack to the final table and eventually bowed in 10th just two spots short of the money.

There were also two teams from New Caledonia at the final table, with Olivia Andrew and Valerie Defossez (fourth) edging out Fabrice Ho and Florent Mathey (fifth).

The battle for the title came down to the teams of Alex Antonios/Nabil Edgtton and Peter Aristidou/Toan Nguyen with the former team prevailing to collect the first prize of $8450. It also added a second Star Poker title for both players – Edgtton won the Six-handed event at the Summer Series in December while Antonios took out the Opening Event at last year’s ANZPT Sydney.

After a marathon 10 hours of play, the field for the 2012 ANZPT Sydney Main Event has been reduced to 27 after 207 players had taken to the Star Poker felt at the start of […]

Always among the most popular events on any major schedule, the $550 ANZPT Sydney Six-handed event drew a classy field of 126 players. And to add an international flavour to a series dominated by local […]

The second biggest field in tour history has been slashed from 461 players to 207 after the opening two flights of the ANZPT Sydney Main Event at The Star. The total number of Main Event […]