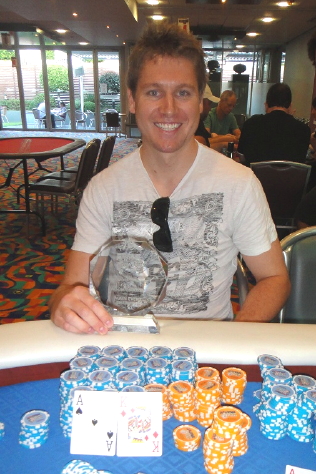 Brent Dawson (pictured above) turned in an impressive performance to propel his short stack at the start of day two to victory in the Aussie Hold’em Poker Summer Poker Championships Main Event.

Lying 13th of 15 in chips at the start of play on day two at Club Macquarie in Argenton, NSW, Dawson defeated overnight chip leader and 2011 Spring Poker Champs Deepstack winner Ryan Nichols to pocket the $2600 first prize. After 10 hours of play on day one, the chip counts heading into day two were:

The final table of nine read like a “who’s who” of Newcastle poker with just one set to miss out on the money. That unlucky player was Brad Locking after two pots in which he found his strong starting hands dominated pre-flop.

Tameeka Jones also suffered a few knocks, which helped bolster the stack of the eventual winner. She was eliminated in eighth-place making her the most successful player in the 2012 Summer Poker Championships with three cashes in four events.

Drew Netorowitsch finished seventh, Adam Mujic was sixth, Duncan Robins placed fifth followed shortly after by his friend Antony Ratzer in four. Duncan and Antony had travelled down from Grafton to play in the events and both went home with cash!

It took seven hours to decide the heads-up duo of Dawson and Nichols. Compared to the blinds, both players had monster stack so it was possible that the heads-up match would go for some time but that was not to be as almost every hand involved an all-in move. The end came with Dawson’s As-Kd against Nichols’ Ad-Jd on a flop of Qd-5s-6d. Ryan’s hopes of a diamond flush were dashed when the turn and river produced 4c-5c.

“I still can’t believe I even made it to the final table with all those good players and to win it is a dream come true,” Dawson said, while Nichols paid tribute to the winner: “Brent has all the right ingredients to play the game at the highest level.”

• The third of the five events on the Summer Poker Champs schedule was the $55 buy-in Deepstack tournament, which drew a field of 65 players. Andrew Byrnes emerged victorious over Leonie Gordon and Luke Kerr to pocket the first prize of $1350. 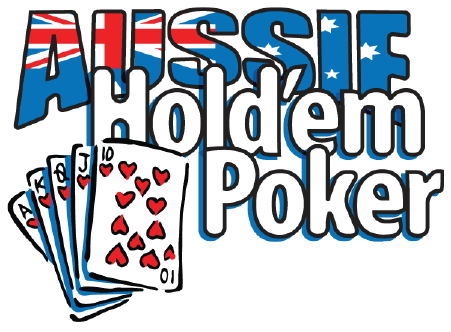 The battle for the Aussie Hold’em Poker Summer Poker Championships Main Event title is into its second day at Club Macquarie in Argenton, NSW. The $110 buy-in Main Event attracted a field of 66 runners, easily covering the guarantee of $5000. Players started with a stack 20,000 with levels at 30 minutes.

Cooper was KOed on the very first hand of the tournament when his (club) flush was beaten by Brad Locking, who skilfully disguised his nut flush which gave Rod the impression that he had hit a straight on the river. Amazingly, a third player had folded to Brad’s all-in because he too had hit the flush! Two other players said they had folded a club meaning that 11 out of the 13 clubs were involved in the hand!

By day’s end, just 15 players were still in contention for the title with Ryan Nichols heading the chip count on 207,700. Nichols was the winner of the $55 Deepstack Event at the 2011 Spring Poker Championships. Along the way he claimed some valuable “scalps” including Mark Nelson, Leanne Haas and Linda Wooster.

Rhys Gregson was close behind with 165,000. He was very successful in Opening Event the 2012 Aussie Millions finishing 19th. Antony Ratzer is in third chip position with 125,800. Ratzer is from the Northern Rivers area of New South Wales where he has enjoyed a great deal of local success. Fresh from a pair of top-two finishes in the opening two events of the Summer Poker Championships, Tameeka Joes was also poised for another deep run holding 121,700.