Tameeka Jones (pictured above) has underlined her status as one of the nation’s premier female pub poker players with a dominant start to the Aussie Hold’em Poker Summer Poker Championships at Club Macquarie. She pocketed $1150 and a championship trophy after taking out the second event on the schedule – the $22 buy-in No Limit Hold’em with single rebuy and add-on.

Just as the clock ticked past 4am on Friday, the blinds had reached the level where Glenn Shepherd (who started the heads-up battle trailing 1:5 in chips) would only survive a few more hands so he made his move after a checked flop gave him a pair of deuces. Jones had also hit the flop with a pair of threes and, when the turn and river blanked, she was confirmed champion after a dominant final table display. 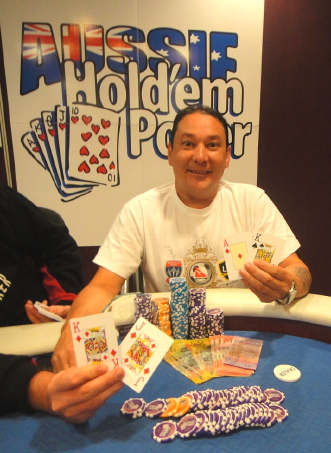 A night earlier, Jones placed runner-up to Mark Nelson (pictured above) in the $44 Pineapple event. Nelson took home $665 for the win while Jones collected $355 for second. The Summer Poker Champs continue at Club Macquarie tonight with a big field expected for the Six-handed NLHE event before tomorrow’s two-day Main Event and Sunday’s $550 High Roller tournament. PMA will be providing regular updates over the weekend.

Blacktown Workers Club was the venue for the final major event on the APL calendar for 2012, with the Pink Heart Ladies event and NSW Pro Open attracting excellent numbers. • A field of 88 […]

The first six months of 2013 loom as the most important in the history of Australian poker since the boom that came in the wake of Joe Hachem’s 2005 WSOP victory. The world’s poker spotlight […]