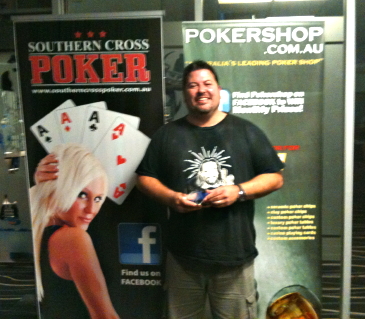 The cream of the region’s players rose to the top with Australia’s number ranked online player Matt Wakeman among the chip leaders until late into the day, while the solid runs of Peter Seckold, Nick Poganovski, Jim Psarros, Ben Kostrzewski and Jason Loz ended short of the big money.

Play has reached the bubble in the East Coast Poker Championship with just two players of the 18 remaining set to miss out on a slice of almost $30,000 in prizemoney. Matt Wakeman has taken the chip lead ahead of Scott Clark, Peter Seckold, Troy Martin and Nick Poganovski as darkness falls over Diggers @ Newcastle City.

The cream is starting to rise to the top at the business end of the East Coast Poker Championship Main Event with just 45 of the 165 starters still seated with the evening session underway at Diggers @ Newcastle City. Jason Loz is still among the chip leaders but he’s been joined near the top of the chip count by two of the region’s most consistent performers – Jim Psarros and Ben Kostrzewski.

Down to 56 in race for the title

Just 56 players remain in contention for Southerrn Cross Poker’s showpiece title – the East Coast Poker Championship title. After a tough afternoon of poker at Diggers @ Newcastle City, Jason Loz is still the man to catch having built his stack at the top of the chip count to 240,000 (his stack is pictured below). Matt Wakeman is also still grinding away and holds 55,000. Players will be looking forward to taking a dinner break soon and enjoying the great meals on offer at the In Club Café or ever-popular Star Buffet. 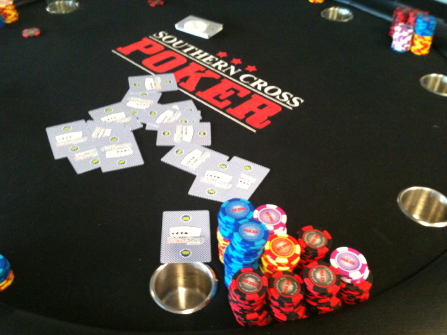 Jason Loz is the new chip leader in the East Coast Poker Championship as the antes start to pressure the shorter stacks leaving just over half of the 165 starters in contention for the title. 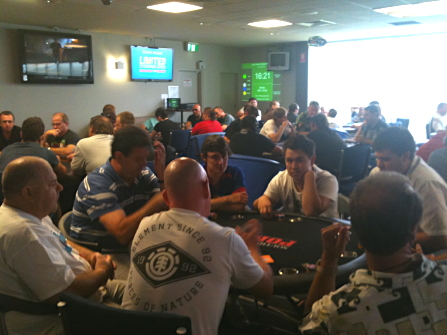 A quick word about one of the proud supporters of Southern Cross Poker – www.pokershop.com.au is Australia’s leading supplier of poker products. Poker Shop is dedicated to supplying its customers the best quality products with the best prices, prompt deliveries and professional service with a friendly smile. Email info@pokershop.com.au or call (02) 8005 0057 or 0439 771111 for further information.

The field has been confirmed at 165 players for the latest edition of the East Coast Poker Championship. The players will be battling for a share of a total prizepool of $29,700. The field has already been whittled down to 141 players, with Michael Miller (pictured below right) topping the chip count on 67,000. 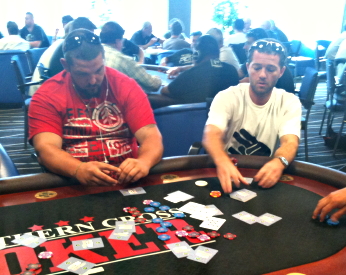 More than 150 players have already taken their seats at Diggers @ Newcastle City on this mild afternoon, with the field featuring Matt MJW006 Wakeman and defending champ Graham Gillespie.

It’s great to see Wakeman supporting events like the ECPC. He recently cracked the global top 10 on PocketFives and is ranked Australia’s number one online player. But he’s only recently turned his attention from the virtual to live MTT circuit so experience in events like this is invaluable.

Diggin’ for ECPC gold at Diggers

Graham Gillespie pocketed a first prize of $10,000 when he took out the East Coast Poker Championship last November at Diggers @ Newcastle City. It was the biggest single-day poker event ever played in November, offering a prizepool of $31,000.

The team at Southern Cross Poker (SCP) are hoping to surpass that milestone today as the region’s best and brightest – from Wyong to Wauchope – have again converged on Diggers @ Newcastle City for the East Coast Poker Championship. More than 100 players have already confirmed their seats as qualifiers via their local SCP venues including:

• The top 10 in every SCP region
• Every venue leaderboard winner
• The top 15 players on every venue leader board qualified for the SCP semi-finals, with 10 seats up for grabs
• The top three at every $7k Rewards Game
• Last Chance satellites held three weeks prior to each ECPC event