The chips have been bagged and tagged after day 1A of the Star Poker Summer Series with 42 of the 58 starters surviving the six one-hour levels. Continuing his excellent run in the Series so far, Alan Bustany topped the chip count with 85,800 just ahead of reigning ANZPT Sydney champion Michael Kanaan (84,250). Peter Skouteris (78,775), Toby Ryall (76,725) and Waratahs player Benn Robinson (72,525, pictured below) filled out the top five. 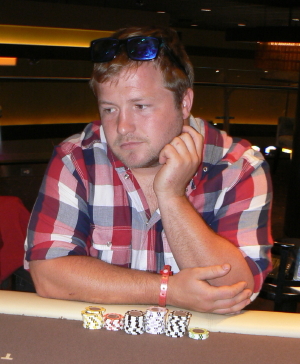 Play has ticked into the final 30 minutes of day 1A in the Star Poker Summer Series Main Event. The focus remains the four tables is use in the Oasis Room, where some starstruck railbirds just had the chance to watch NRL superstar Johnathan Thurston being interviewed by the Triple M crew before he takes his seat in tonight’s Last Chance Mega Satellite. 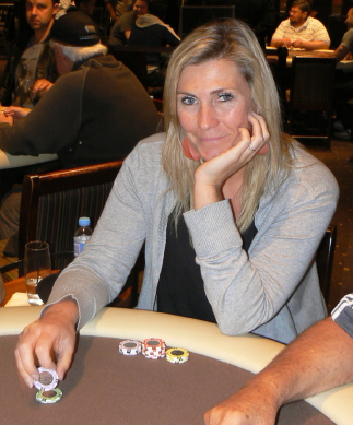 A total of 14 players have been eliminated in the previous five and half hours, with the latest departure that of Melbourne’s Jackie Glazier, the only female player in today’s field. After a frustrating day at the felt, Glazier stuck in the last of her stack with Ad-Qd, only to find Andrew Scarf poised to strike with his As-Ah. The board ran out Js-Jh-8c-Jd-2s, leaving Glazier free to reflect on the day’s events over a glass of red while Scarf’s stack climbed above 60,000. Michael Kanaan remains in the chip lead on 80,000.

5pm: Kanaan picks up where he left off

Michael Kanaan pocketed more than $200,000 when he won the ANZPT Sydney title here earlier this year, and he’s already staking an early claim to the Star Poker Summer Series Main Event crown as the new chip leader on day 1A. In the biggest pot of the day so far, Kanaan’s A-K improved to trips on the flop against an opponent’s pocket kings to stack more than 85,000 in chips with less than 90 minutes of play remaining. 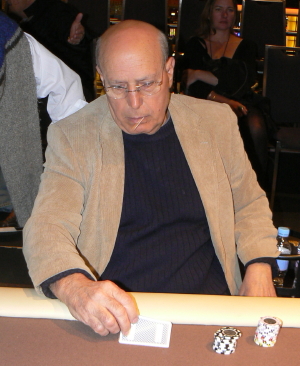 At an adjacent table, we also just watched a masterful call from hometown favourite Antonis “Toothpick Tony” Kambouroglou. There’d been betting on every street of a board that ran out Q-6-7-Q-8, with Kambouroglou calling a river bet that would have cost him his tournament life, but hauled in a big pot after showing K-7 to best his opponent’s 4-3. Play is about to tick into the final level of the day with blinds about to climb to 200/400 with an ante of 50.

Waratahs and Wallabies prop Benn Robinson is a surprise chip leader on day 1A of the Star Poker Summer Series late in the fourth level of the day. Mixing aggression with a slice of luck, Robinson is clearly the table captain among the likes of Graeme Putt, Jackie Glazier and Andrew Scarf and has amassed a stack of more than 65,000.

He’s looking good to progress to day two after poker manager Stephen Ibrahim confirmed there will just six levels today. Despite the relatively small field of 58 players, the AUD $1 million guarantee remains firmly in place, and word of the potential overlay is sure to bring a big field into Star Poker for tonight’s Last Chance Mega Satellite. 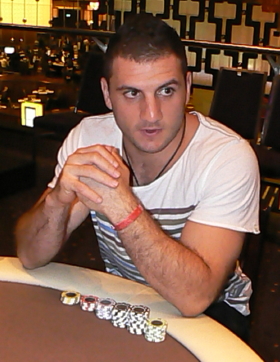 It’s been a mixed start for the poker notables with Jonathan Karamalikis cruising on 35,000, Martin Rowe and Mel Judah are just under their starting stack of 30,000, Jeff Rossiter has 25,000, Antonis “Toothpick Tony” Kambouroglou holds 20,000 and Jesse McKenzie is on approximately 18,000 while NRL star Robbie Farah (pictured above) is holding his own on 28,000. Six players have been eliminated today, including Andrew Vos, Will Tomlinson and Brendon Rubie.

Only three of the 58 starters have been KOed so far on day 1A of the Star Poker Summer Series Main Event at The Star, but there have been precious few big pots as players make the most of the relaxed structure and start stack of 30,000.

It’s been a solid start for last year’s winner Jonathan Karamalikis, who holds 42,000 after two and a half hours of play while boxing champ Will Tomlinson has been happy to mix it with the pros on his table – including Andrew Scarf, Jackie Glazier and Brendon Rubie – and holds just over 44,000 in chips. 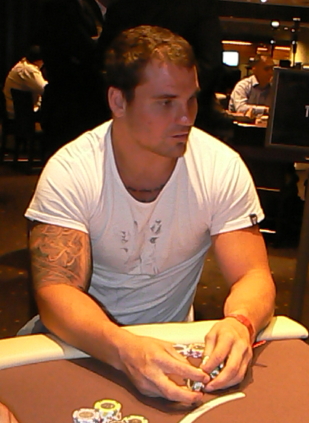 On the adjacent table in the Oasis Room, where Sunday’s final table will be played, Anthony Watmough (pictured above) just came up with a creative way to improve his stack – simply lift the chips from the dead stack to his left! Fortunately, his actions were quickly picked up by the dealer, much to the mirth of Daniel Neilson who may have wished he’d though if it first after his stack fell as low as 15,000 during level three.

Not wishing to send today’s celebrity line-up to a slaughter, Star Poker ambassador and 2009 Main Event champion Aaron Benton provided a masterclass before play started today. Among the most attentive students was Sydney media icon Ray “Rabs” Warren, who politely elected not to take up the offer a seat today in respect of the poker pros battling for the title. 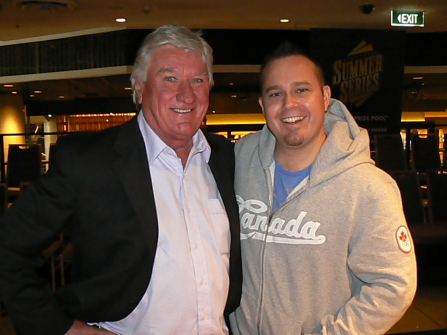 But Benton thought Warren would be right at home among the sharks in the Star Poker room after one hand in which he checked the second nuts on the river and called Benton’s bluff.

The celebs enjoyed a gourmet feast provided by new Star eateries including including Balla, Black and Sokyo. The range of sashimi provided by Sokyo included salmon with a special chilli sauce, Tuna belly seasoned with wasabi and pink snapper, capers, garlic chips and Yuzu honey. Balla supplied a burrata cheese plate, octopus, potato and parsley salad, and a pork terrine. Black showcased tartar of beef with a jellied beetroot sauce and woodfired steaks while Bistro 80 supplied a giant seafood platter.

The first level of the Star Poker Summer Series Main Event has passed without incident as the seven tables of players settled in for the opening flight. It’s an eclectic mix of our best poker players and sporting celebs who’ve taken heir seats today, and both sets of players are picking carefully around each other in the early going. 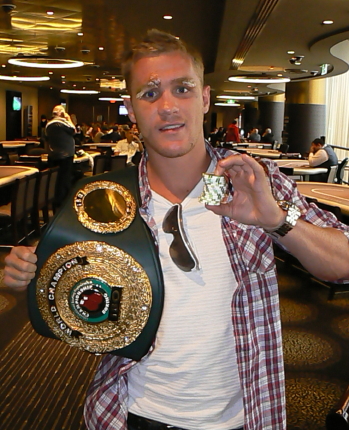 The list of sporting celebs is headed by Waratahs and Wallabies winger Drew Mitchell, Manly and Kangaroos backrower Anthony Watmough, Wests Tigers skipper Robbie Farah, the Nine Network’s Andrew Vos and newly crowned IBO Super Featherweight champions of the world “Wild” Will Tomlinson (pictured above). Triple M’s Gus Worland was also playing today but busted just after the end of the opening level. So far, we have 56 players seated today, with blinds up to level 2 (75/150). 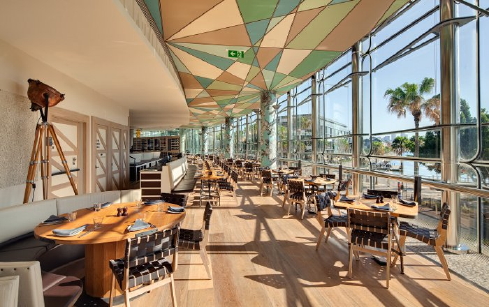 Welcome to PokerMedia Australia’s coverage of the opening flight of day one in the $5000 buy-in Star Poker Summer Series Main Event, live from The Star in Sydney. Today’s coverage is proudly provided with thanks to Balla, which marks Stefano Manfredi’s return to the Sydney dining scene with what he describes as the most Italian restaurant he has ever done.

Named after Giacomo Balla, the futurist poet and painter, Balla is a modern interpretation of the classic Osteria Milanese, with a menu built around the heart of traditional Italian cuisine. The addition of a wood-fired grill to Stefano’s Italian kitchen reflects his dedication to delivering truly authentic cuisine. It also features the stylish Aperitivi Bar offering a million dollar view over Sydney Harbour.

Stefano Manfredi is one of Australia’s leading chefs and recognised as a master of modern Italian cuisine internationally. He has influenced the way we eat since first opening The Restaurant Manfredi in 1983, which was awarded a coveted Three Chefs Hats by The Sydney Morning Herald Good Food Guide 1995. More than two decades later, Manfredi has owned and operated several restaurants in Sydney, most notably the award winning The Restaurant Manfredi (1983-1996) and Bel Mondo (1996-2002).

He then cemented his reputation as ‘The Godfather’ of Italo-Australian cooking when the Italian Prime Minister presented him with the inaugural trophy from the Italian International Culinary Institute for Foreigners. Along with being included as one of Italy’s internationally recognised chefs in the first English translation of The Silver Spoon 2005.

9.25pm: Game over And that’s all she wrote for tonight, with the bubble bursting on the very last hand of the night! After starting with 212 players earlier today, just 54 remain in the hunt […]

11:00pm: Daniel Laidlaw wins Sydney Championships main event ($165,256) Well that was a sudden finish. The three remaining players took about 20 minutes to come to a fair conclusion on a deal and once that […]

9.55pm: Meveni Tonga tops Day 1b chip counts The second flight of the inaugural APT Sydney is complete and it is NPL qualifier Meveni Tonga (pictured above) leading the way with a monster stack of […]