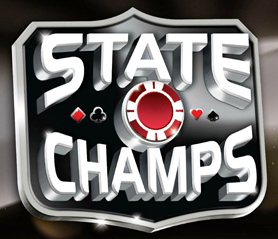 The final event in the first round of State Championships under the combined banner of the 888Poker League and Australian Poker League drew a huge field of 404 players to the Dingley International in Melbourne’s south eastern suburbs. After 11 hours of play, Vic Duncan was crowned Victorian State Champion after a dominant display at the final table.

Such was the size of the field that the main tournament area was completely full and tables needed to be set-up elsewhere in the complex. It wasn’t long until a handful of players established themselves at the head of the chip count and, surprisingly, most were still there at the business end of proceedings.

Daniel Simonetta and Rob Cvijrticanin swapped the chip lead back and forth for much of the afternoon and they were at the head of the pack when the line-up for the final table was decided, comprising:

With the winds in his sails, Duncan quickly stamped himself as the player to watch after claiming two of the first four scalps but the key hand of the tournament came six-handed when his pocket aces sent Gunn and Whittaker to the rail.

Simonetta picked up the next two eliminations, including the final female player Drew Bailey, to take a slight chip lead into the heads-up battle with Duncan.

Neither player looked likely to take their foot off the pedal and all the chips were soon in the middle. Duncan shoved all-in pre-flop with As-10c, and Simonetta (Qc-8d) called. The board was spread 6h-10s-7s-Ac-Jh, giving Duncan two-pair and the title of the first Victorian State Champion under the new banner of the APL & 888PL.

Congratulations to Michael Richardson, who bested the field of 429 players at Club Central Hurstville yesterday to win the first 888PL/APL NSW State Championship for 2012. Richardson claimed the first prize of $8000 after accounting […]

The 888PL/APL State Championship spotlight shifts to Victoria later this week with three days of action at one of the best known pub poker venues in the country – the Dingley International. The PMA live […]

Michael Wallace has etched a spot in Queensland poker history as the first State Champion under the new banner of the APL and the 888PL. Wallace was won of eight players who also earned a […]