Event reporting proudly brought to you by www.shanewarne.com

Baker leads after first flight (3am)

The Crown Poker Room was pumping last night for the opening flight of the first ShaneWarne.com Super Stack tournament. A massive field of 324 players featured players from around the country including a big contingent from the 888PL and, of course, the man himself.

Play continued until the early hours until the chips were bagged with 79 players remaining. Warney was actually the chip leader in the minutes leading up to the end of play but the official count revealed that Geordie Baker led with 361,900. The second flight kicks-off at 12.10pm later today, and another bumper field is expected thanks to the repechage format, which allows players eliminated in the opening flight to re-enter today.

The Crown Poker Room is abuzz with a big field of players turning up for the ShaneWarne.com Superstack event at Crown Melbourne. The great man himself (pictured below) welcomed everyone to tonight’s Flight 1 and announced to the dealers to “shuffle up and deal” ahead of play. Warney then took his seat at table 28 where his wide-eyed foe seemed somewhat pleased to have him at their table … for now. 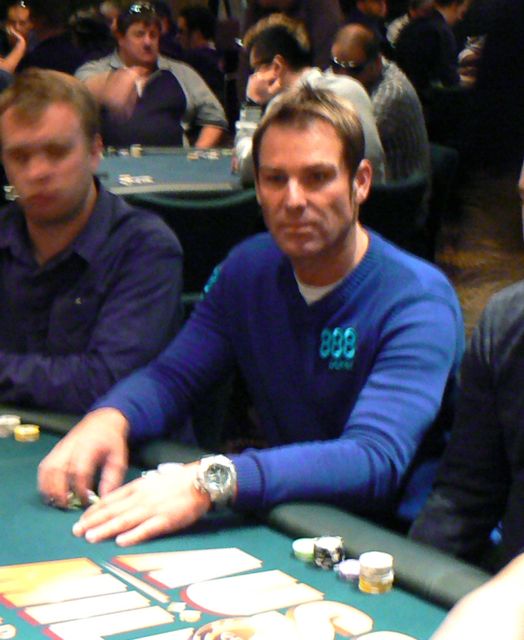 The $300 buy-in ShaneWarne.com Superstack event was specifically designed for local poker players to hone their skills playing championship style, super stack events, without the large buy-in. It is open to all Crown players and is a repechage event (players eliminated in the first flight can re-enter the second flight). Players commence with a 30,000 start bank and blinds are set at 30 minutes. There will be 14 levels played tonight.

Con Diakovasilis leads field into day three Players from across the nation have journeyed to Melbourne for the second MAIN EVENT, so it’s only appropriate that four of Australia’s six states are represented in the […]