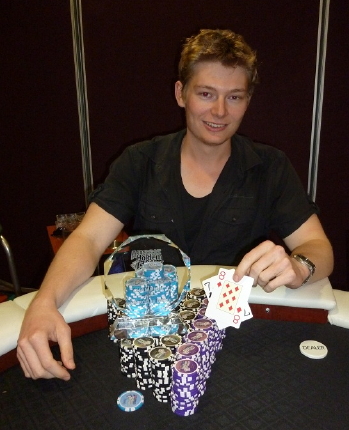 The 2011 Newcastle Spring Poker Championships have wrapped up with local player Elvis Earle (pictured above) crowned High Roller Invitational champion. In the final hand, Elvis called from the SB with 7c-8d, with Scott Clarke checking. On the flop of Ad-Ts-9c Scott decided to make a small raise knowing his ace was good but needing to get as many chips from Elvis as he could to even up the stacks a little.

Elvis flat called and, when the turn was Js, Elvis could smell the money having filled his straight. Scott moved all-in, Elvis called and the rest is history. Scott Clarke finished in second place with $2660, more than happy with his day’s work.

• This wraps up our coverage of the Spring Poker Championships. Thanks to Marty, Adam, Martin and all the team for their assistance, we hope to be back soon with more coverage from Aussie Hold’em Poker. 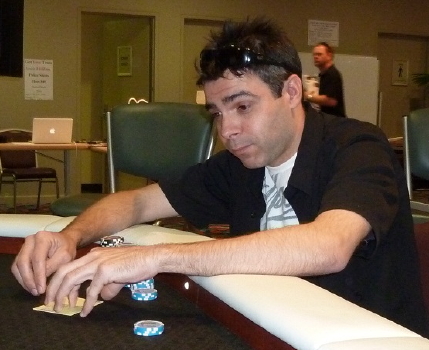 After a topsy-turvy tournament, Trevor Speering made a bold move with 6-3 against Elvis Earle on a Q-6-2 flop. Everything would have been OK for Trevor if Elvis hadn’t been holding Q-8. The turn and river blanked out and Elvis added another scalp to his collection. Trevor walked away with $1520. The heads-up duel was decided soon after with Scott Clarke (pictured) on about 75,000 but not prepared to give in without a fight with Elvis Earle a 4:1 chip leader holding 310,000.

Cale nailed on the bubble (10pm)

We are in the money – Cale MacLean was down to “any two cards” mode and shoved before becoming another of Elvis Earle’s victims when his pocket queens were run down by Elvis’ 8-9. The flop was J-T-3 and the turn a 7 to give Earle a straight and send MacLean out on the bubble.

Online poker pro Matthew Wakeman has busted from the High Roller Invitational after his pocket 7s received a call from Dave Haas (A-Q). A Q on the flop and the river sealed Matt’s fate and he exited in sixth place.

Haas followed next in fifth after his QQ ran into the A-J of Elvis Earle who found in ace in the window to send Haas packing. Elvis’ preferred game is PLO but he’s shown here he can hold his own in NLH and now holds a monster stack of more than 150,000. 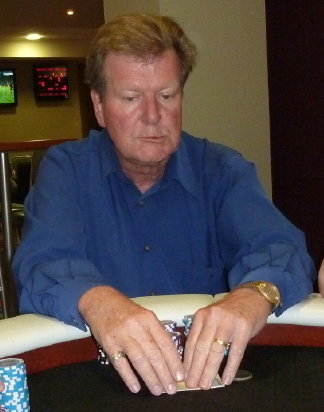 With seven still in the race for the title, play has slowed to a crawl as players adopt a cautious approach. Big moves happen every now and then but, with the chance to pick up a 10-1 investment on their money, the players are not taking as many risks now.

Players have just returned to the felt at Club Macquarie after the dinner break in the High Roller Invitational. There was plenty of conversation over the evening meal of the carnage that saw six players hit the felt in quick succession just before the break. Sid Janik, Leanne Haas, Karel Brstak, Nick Pogonovski, Mitchell Moy and Brenton Nichols (brother of event 3 winner Ryan Nichols) were all eliminated, and the action didn’t slow down once players were again seated.

On the first hand back, Rod Cooper was all-in with A-Q against Scott Clarke’s pocket nines, which held up. Kevin Gordon followed soon after when his A-6 was snap called by Trevor Speering, who held A-K and the board ran out blank for both players. There are now seven players eyeing one of the three spots in the money, with the payouts $5320 for first, $2660 for runner-up and $1520 for third.

There are 15 of the 19 players remaining in the High Roller Invitational after Bill Delaney busted out first, giving him an achievement award that he really didn’t want – first out of the Main Event and the High Roller! Two of the more fancied  players, Chris Levick and Scott Kerr were the next to go in quick succession.

To play or not to play; that is the question (4pm)

With just over 30 minutes of late registration time left for the High Roller event there are a few players on the rails considering whether or not to jump in for $550. The players are all being cautious with no eliminations and the blinds have now reached 100/200 with a 25 ante. 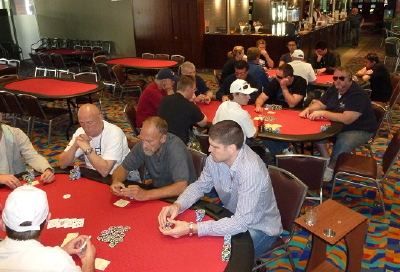 The Spring Poker Championships $500 High Roller Event is under way with 18 players making up a field of the “who’s who” of both the local and Sydney poker scene. Notable players include Chris Levick and Matthew Wakeman as well as past Newcastle major event winners Brenton Nichols and Scott Kerr.

Bag ’em and tag ’em – that’s it for the night (12am) After a marathon day of poker at Club Macquarie, 11 very tired players are heading home for a well-deserved rest after day 1 […]