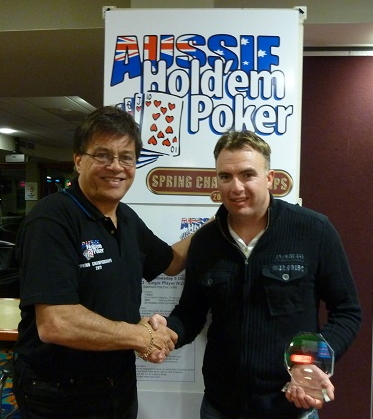 Bartrom on the mark in Spring Champs opener

The opening event of Aussie Hold’em Poker’s first Spring Poker Championships has been run and won at Club Macquarie in Argenton, NSW. It wasn’t the standard pub poker fare on offer with a unique $30 mixed games event, featuring a 5000-start bank with players alternating between No Limit Hold’em, Pot Limit Omaha and No Limit Pineapple.

It took six hours to reduce the field of 60 players to a final table of eight with Adela Murphy holding the chip lead. However, she would bow out in sixth and Mark Bartrom would go on to claim the first Spring Poker Championships title and the first prize of $730. The series continues tonight at Club Macquarie with the $66 No Limit Hold’em Teams Event offering a $1000 guarantee.

The tournament has now reached final table of eight players and the chip leader is Adela Murphy with a healthy 54,300 chip stack.

Just before the most recent break, the field was slashed to 11 when Daniel Campbell (12th) and David Maxwell (13th) were eliminated in the same hand, with Andrew Turner taking down the pot. Mitchell Moy now leads the field on 49,300. 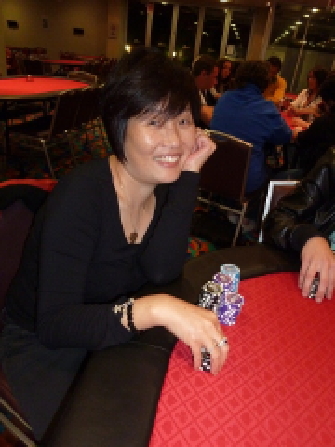 At the second break we are down to 16 players in the opening event of the Spring Poker Championships. The action has been fast and furious, with many players busting in the last session during the PLO and Pineapple portions of play in this unique event.

One time chip leader Martin Burgess was the last player eliminated before the second break in 17th place – his Kh Qd looking great on a flop of Ks Kc Qs, but fell behind against the A-K of Adela Murphy when an Ace fell on the turn.

Christine Wilson is the chip leader on 63,700 with NPC3 PLO Champion Mitch Moy close behind with 55,400. Stay tuned for more updates as we power towards the final table! 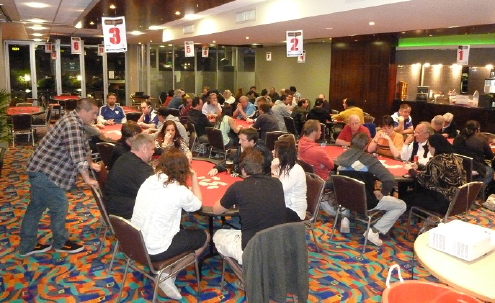 A total of 60 players took to the felt, and at the first break 42 players remained in the event, with chip leaders Christine Wilson (29,800) and Martin Burgess (24,475) dominating the action. As expected, the action has been fast and aggressive, with most of the early casualties falling during the Pot Limit Omaha leg of the tournament.

We witnessed one especially memorable hand between Scott Bruhn and chip leader Christine Wilson where, with the blinds at 75-150, Scott opened the button to 375 with As Ts (4s) and was called by Christine on the button with Kc Tc (9h). On a board of Ks Qs 5h, Christine checked, and Scott fired 525 into the pot where he was raised to 1300 by Christine. Scott called, then both players checked the Ad turn. The Js peeled on the river, completing the royal flush for Scott, who bet 1800 and was quickly looked up by Christine with her Broadway straight.